With loons and trout alongside allegorical monsters, the fantastical murals at the center of artist Alexis Rockman’s new exhibition don’t just look like a dream sequence; they are a dream come true.

Alexis Rockman: The Great Lakes Cycle emerged out of a 2013 phone call with Rockman’s longtime friend and collaborator Dana Friis-Hansen, director of the Grand Rapids Art Museum, where the series will make its debut on Jan. 27 2018. “[Dana] asked me if I had any dream projects up my sleeve,” Rockman said. “I looked at the map and thought of the Great Lakes.” 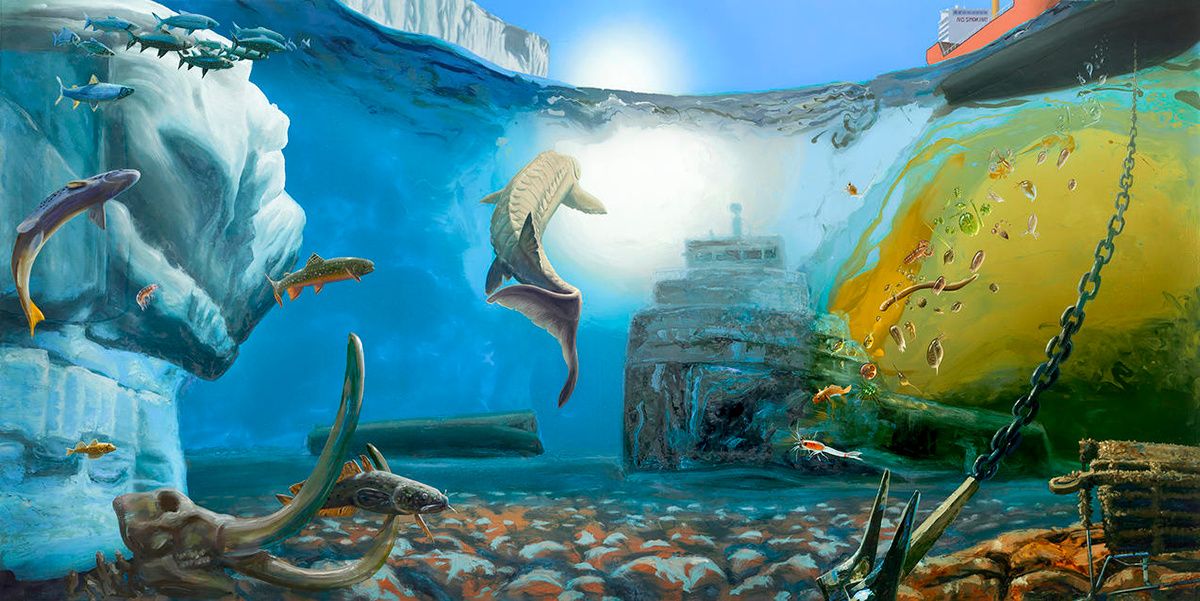 Though he was born and raised in New York City, Rockman said Lakes Huron, Ontario, Michigan, Erie and Superior appeal to him because they are both natural wonders and human-made disaster zones. These massive freshwater lakes—the world’s largest by surface area—formed from glacial movement and melting during the Pleistocene. They now hold 20 percent of the Earth’s freshwater and provide drinking water for 40 million people, but threats ranging from massive algal blooms and industrial pollution to rapidly warming temperatures and voracious invasive species now plague these vital resources. “It’s a perfect cocktail of awe, despair, and melancholy,” Rockman said.

Rockman tells the lakes’ story through five large-scale paintings, each measuring 6 by 12 feet, beginning with the Pleistocene, exploring the present day, and imagining the future (which includes opportunities for recovery and preservation). The exhibit also features six large watercolors and 28 field drawings made from organic materials collected from Great Lakes sites. 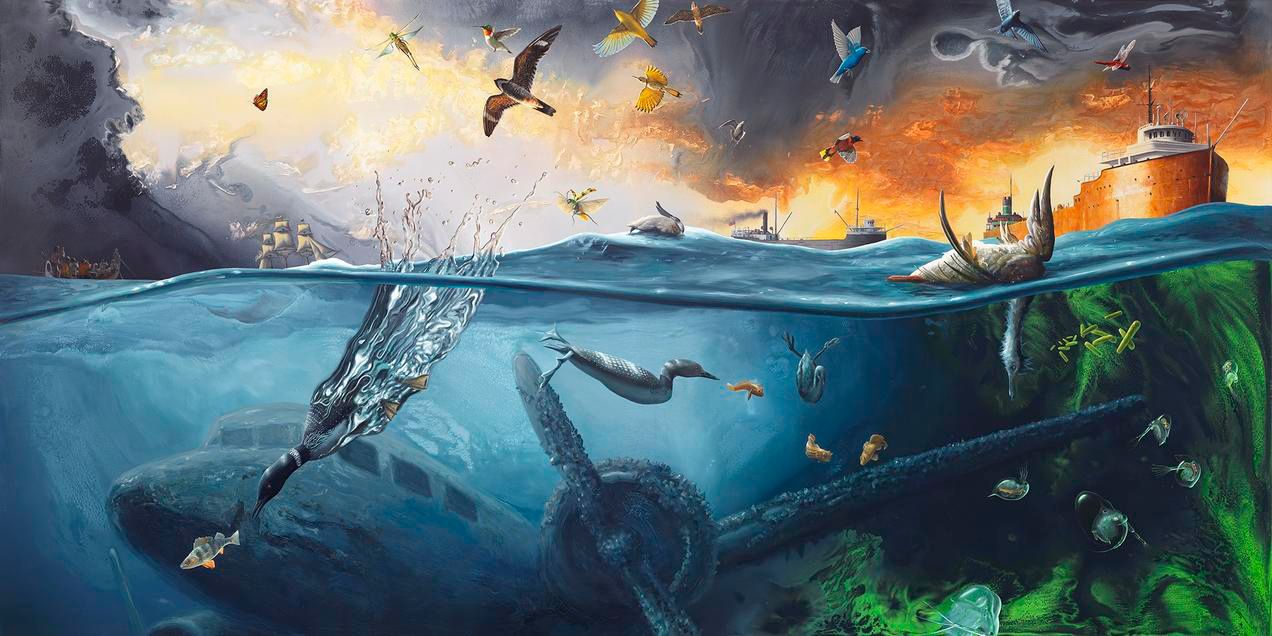 The paintings abound with Rockman’s unique style, which combines his passion for natural history and landscape painting with a dark, hallucinatory flair. He refers to this particular blend of influences as “natural-history psychedelia.” Director Ang Lee was so taken with Rockman’s approach that he asked the artist to create visual inspiration for his 2012 film Life of Pi.

For his latest work, using an itinerary developed by the Grand Rapids museum, Rockman set out on a tour of eight U.S. states and Canadian provinces in the Great Lakes region. Along with extensive reading, his studies included fishing trips, a circumnavigation of Lake Michigan, and meetings with museum directors and biologists. Rockman had previously painted the lakes in the 1980s, becoming familiar with many of their woes, such as their infamous zebra mussel infestation. But his latest research introduced him to new horror shows, like tiny spiny water fleas that gunk up fishing gear and botulism outbreaks that paralyze and kill birds. The Great Lakes “are under incredible pressure from so many things, it’s just mind-boggling,” said Rockman. 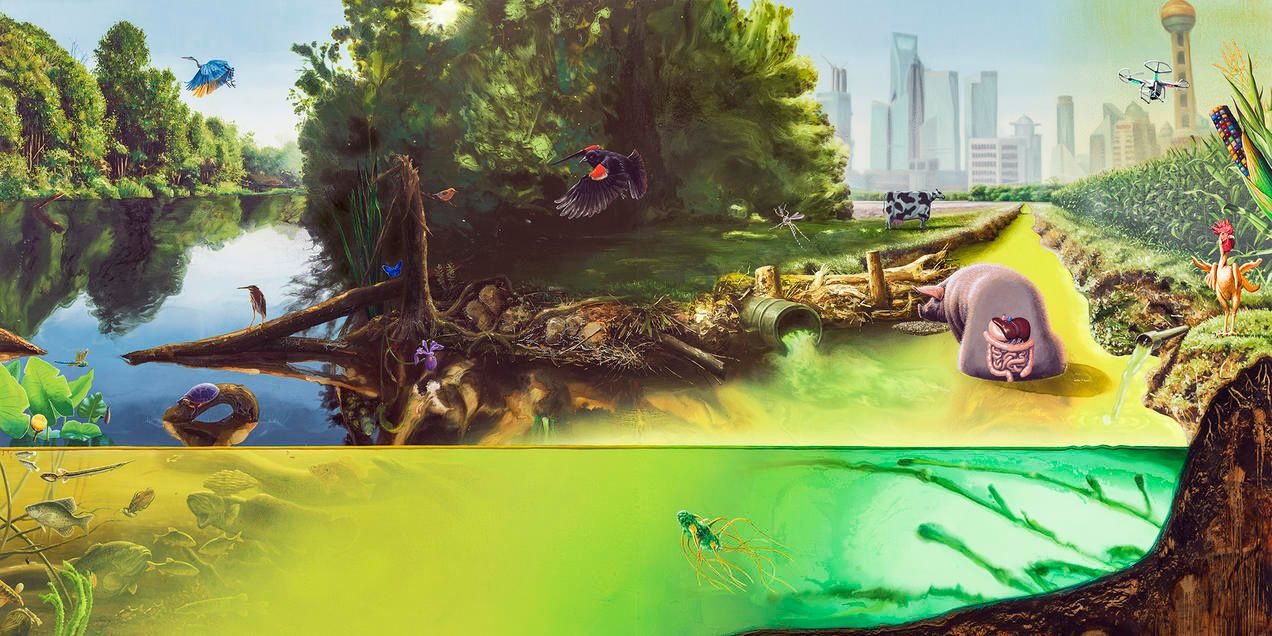 Each painting in the series is accompanied by a map key that that identifies the species and references at play. “As I have worked on this project for the past five years, the environmental issues facing the lakes have become even more critical,” Rockman said. “My expedition in the region, observations of the area, and conversations with experts have helped me tell a story that is, I hope, a compelling call for action on behalf of this natural treasure.”

Alexis Rockman: The Great Lakes Cycle will be on view at the Grand Rapids Art Museum from Jan. 27 through April 29, 2018, before traveling to Chicago, Cleveland and Minneapolis. 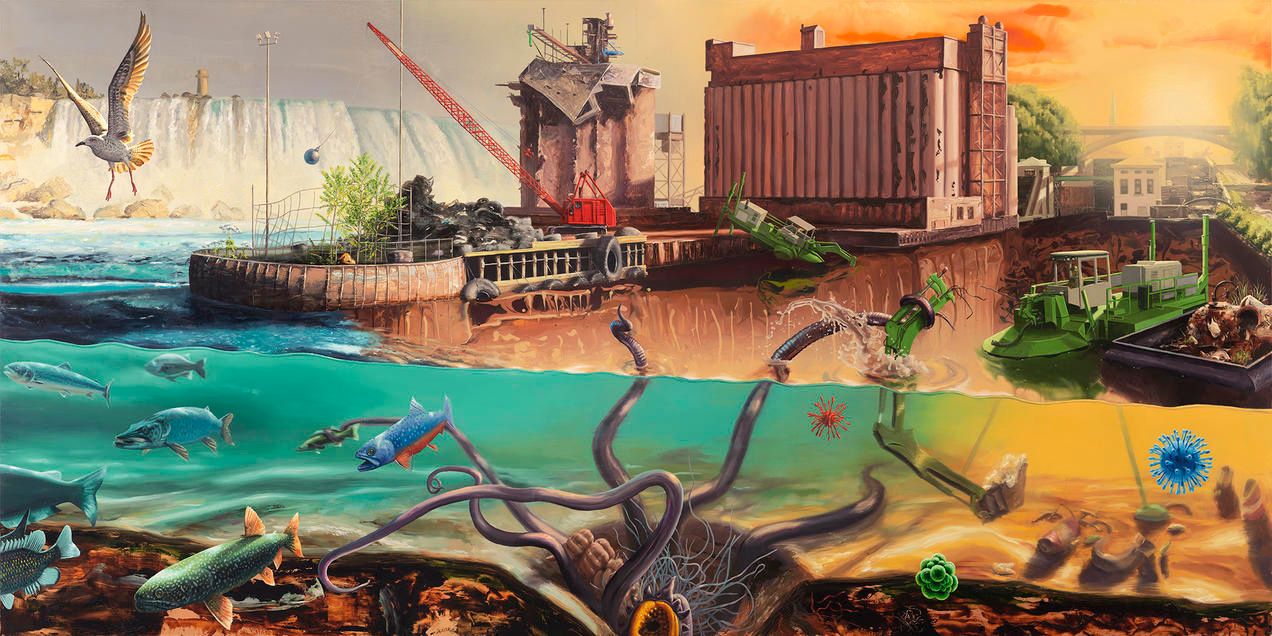