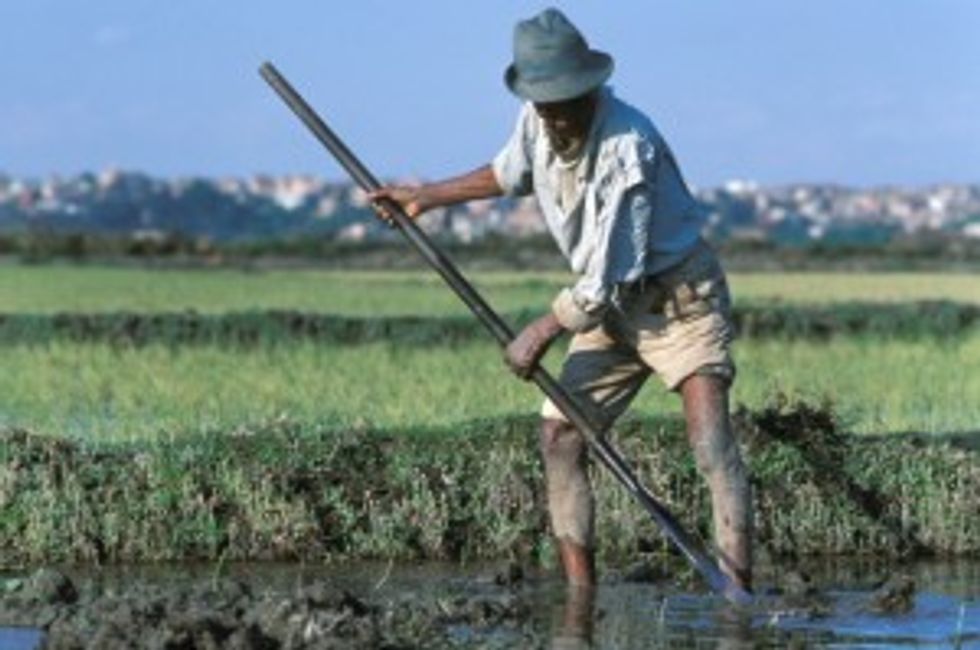 The volatility of food prices, in particular price upswings, represents a major threat to food security in developing countries and typically affects poor populations the hardest. According to the World Bank, during 2010–11 rising food costs pushed nearly 70 million people worldwide into extreme poverty.

“Food prices have continued to rise since 2007, and this has led to millions of people being unable to meet their daily food needs. The price hikes unfortunately also have meant that there is less money for food aid at a time when it is most vital,” said Danielle Nierenberg, director of Worldwatch Institute’s Nourishing the Planet project, an evaluation of environmentally sustainable agricultural innovations to alleviate hunger.

World Food Day is a global event designed to increase awareness and understanding and to create year-round action to alleviate hunger. Since 1981, the event has been observed on Oct. 16 in recognition of the founding of the United Nations Food and Agriculture Organization (FAO), a specialized agency that was established in Quebec City, Canada, in 1945. This year’s World Food Day theme is “Food prices—crisis to stability,” with the purpose of shedding some light on this trend and what can be done to mitigate its impact on the most vulnerable.

Since the inception of World Food Day, organizations have taken advantage of the occasion to inform the public about what they can do to help end world hunger. Although the number of undernourished people worldwide has decreased since 2009, to nearly 1 billion, it is still unacceptably high. According to a recent FAO report, in Africa alone, nearly one-third of the population is undernourished and one child dies every six seconds because of the problem.

“There’s something wrong with a world in which a billion people can’t get enough to eat for normal health while a different billion people threaten their health by overeating,” said Robert Engelman, Worldwatch’s president. “World Food Day is a day for thinking hard about how to see the problem of access to nutritious food whole, as a shared global responsibility for us all.”

On Oct. 16 of this year, countries, organizations and communities are organizing events to educate and raise awareness, with the aim of addressing widespread problems in food supply and distribution systems. These events are raising money to support projects that focus on initiatives such as measures to ease population growth, boost incomes and prepare farmers to protect their harvests against the negative effects of climate change, among others.

Throughout the world, organizations and governments are developing and implementing various plans to stabilize food prices and ensure that there is food on every table. Here are just a few examples:

There is no single solution to end world hunger, and these are just a few of the organizations that are taking the multi-pronged approach that is necessary to address this global problem. World Food Day is the perfect occasion for researchers, policymakers and NGOs to reflect on the existing efforts as well as potential future initiatives that can help fight global hunger and malnutrition.

Worldwatch’s Nourishing the Planet project recently traveled to 25 countries across sub-Saharan Africa, shining a spotlight on communities that serve as models for a more sustainable future. The project is unearthing innovations in agriculture that can help alleviate hunger and poverty while also protecting the environment. These innovations are elaborated in the recently released State of the World 2011: Innovations that Nourish the Planet.

State of the World 2011 is accompanied by informational materials including briefing documents, summaries, an innovations database, videos and podcasts, all available at www.NourishingthePlanet.org. The project‘s findings are being disseminated to a wide range of agricultural stakeholders, including government ministries, agricultural policymakers, farmer and community networks, as well as to the increasingly influential nongovernmental environmental and development communities.