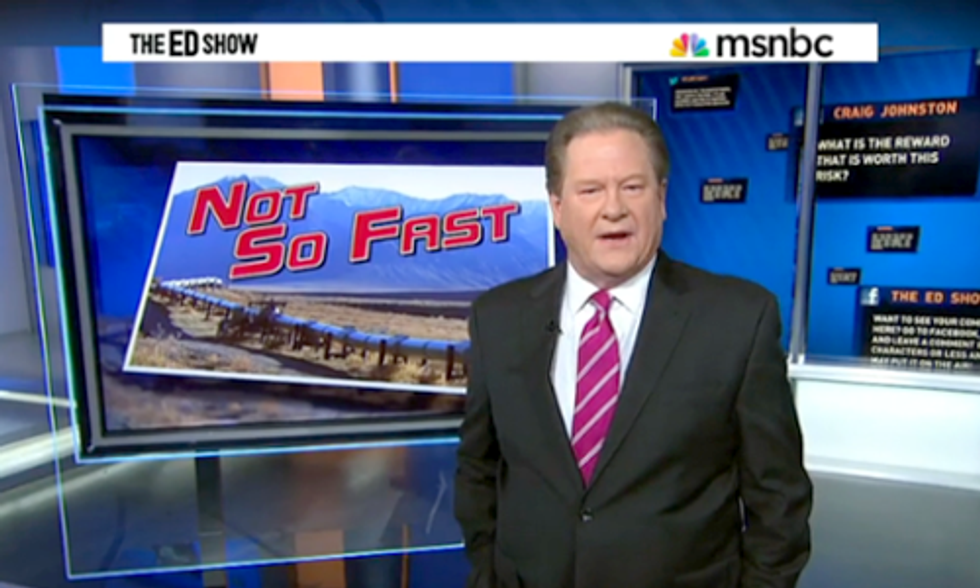 After coming to Nebraska to meet with farmers and ranchers facing eminent domain seizure of their land for TransCanada's Keystone XL pipeline, and listening to the voices of Native Americans, environmental experts and pipeline fighters across the country, MSNBC host Ed Schultz of The Ed Show announced on his March 5 show that he's had a change of heart and is now against the pipeline.

Schultz devoted many recent segments of his show to sharing the stories of people in the path of Keystone XL, but had held firm in his support for the pipeline until now.

On his show, Schultz stood in front of a map of the pipeline route over the Ogallala Aquifer and exclaimed:

The water there is feet deep—not thousands of feet. This pipeline, if it's constructed, like every other pipeline that's been constructed—it will leak. It's an absolute. You can count on it. So the question is this, does the President want to risk the aquifer? You are going to make void the farm economy in this part of the country. It will be one of the most disastrous events ever, because it's irreversible.

Schultz also encouraged President Obama to come to Nebraska and visit with pipeline fighters, and urged him to reject the pipeline.