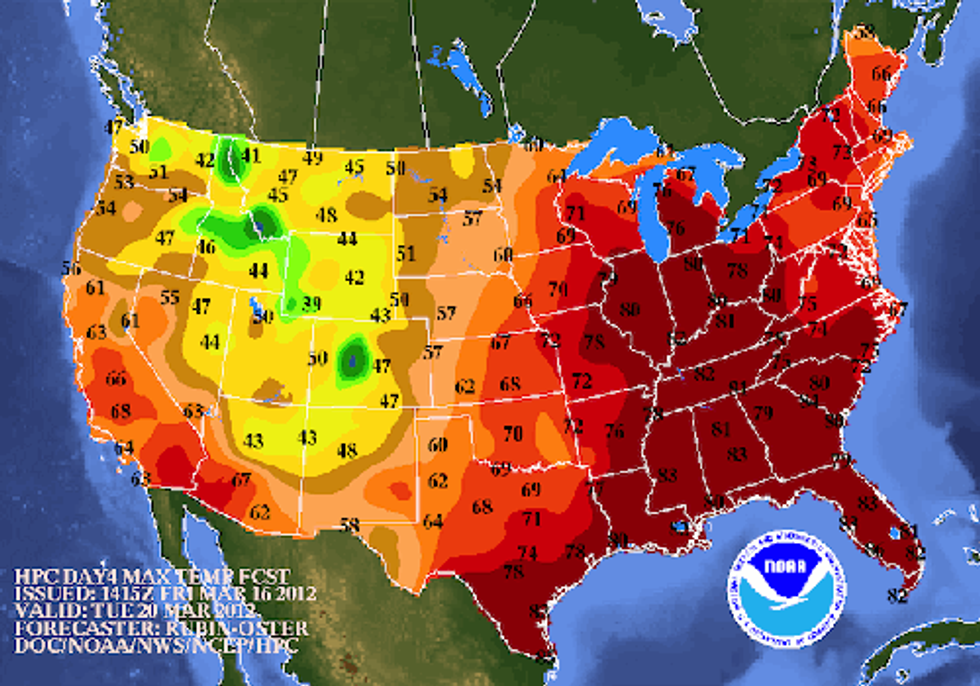 The president makes a potentially interesting speech on Thursday in Cushing, Oklahoma.

It comes amidst a completely unprecedented March heat wave—2,000 records fell last week as cities like Chicago broke records dating back to the 19th century, and that heat is expected to move towards the eastern seaboard this week; meanwhile, record levels of atmospheric moisture are expected to trigger flooding in Texas and Oklahoma. It comes on the tail of a year when America set a new record for multi-billion dollar weather disasters. And it comes on his first visit to the Sooner State since it set the all-time American record for the hottest summer by any state—the average reading for June, July and August was 86.9 degrees, breaking the old record (also Oklahoma, this time 1934) by an astonishing 1.7 degrees. In other words, if there was ever a moment for talking about global warming, this would be it.

But I'm guessing the president won't.

My bet is he'll talk about what's he's called his "all of the above" energy policy—about how America has drilled a record number of oil and gas wells during his administration, about how fracking technology has spread around the country. He'll laud sun and wind, but as supplements to gas and oil, not replacements.

And to make it especially painful to ranchers, indigenous people, and assorted environmentalists, he may do it while standing next to pipe waiting to be laid for the southern half of the Keystone Pipeline, an enterprise he has promised to "expedite."

Amidst the many environmental disappointments of the Obama administration—the fizzled Copenhagen conference, the opening of vast swathes of the Arctic to drilling and huge stretches of federal land across the northern Plains to coal-mining, the failure to work for climate legislation in the Senate, the shameful blocking of regulations to control ozone—the president has done one somewhat brave thing. He responded to the largest outpouring of environmental enthusiasm so far this millennium and denied a permit for the main Keystone XL pipe from Canada's tar sands to the Gulf of Mexico.

Cynics said he did so just to avoid disappointing young people before the election, and pointed out that he invited pipeline proponent Transcanada to reapply for the permit. It's hard not to wonder if those cynics might be right, now that he's going to Oklahoma to laud the southern half of the project just as Transcanada executives have requested.

True, the most critical part of the pipeline still can't be built—thanks to Obama and 42 Democratic Senators, the connection to Canada remains blocked, and hence that remains a great victory for the people who rallied so fiercely all fall. But the sense grows that Obama may be setting us up for a bitter disappointment—that his real allegiance is to the carbon barons. In recent weeks he's been talking tough about removing subsidies for the oil industry, a good idea that many of us will work hard to achieve—but so far he hasn't mentioned by far the most important subsidy, the fact that unlike every other industry fossil fuel gets to dump its main waste product, carbon, into the atmosphere for free.

And if you think about it, "all of the above" is not a particularly coherent energy policy, not if one worries about climate change. Burning all the oil you can and then putting up a solar panel is like drinking six martinis at lunch and then downing a VitaminWater. You're still a drunk—just one with your daily requirement of C and D. If a presidential candidate said they had an "all of the above" foreign policy, where every other nation was an equal ally, they'd be thought lightweight or even dangerous.

But with energy, it apparently seems politic to insist we need never make a choice. Or at least to tailor your talking points to your audience. Obama is making his first presidential visit to my state, Vermont, at month's end. We had the worst disaster in our history last summer—while Oklahoma baked, record rainfalls washed away half the state. And he'd be applauded if he talked about climate change here.

But if he won't do it in Cushing, I kind of hope he doesn't in Burlington either. It would just reinforce the idea that he tells us what we want to hear, not what we need to know.