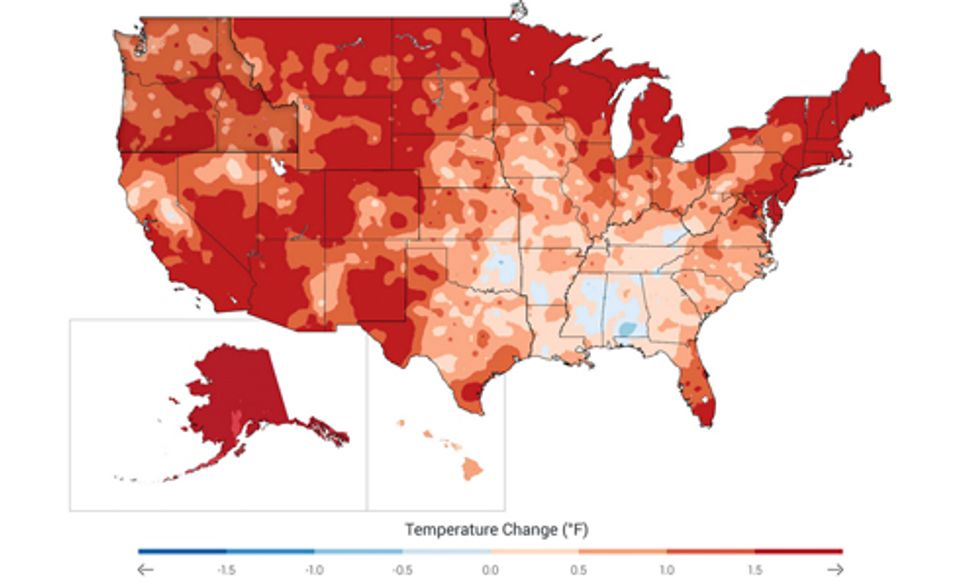 Because we enjoy relatively pure air, clean water and healthy food systems, Canadians sometimes take the environment for granted. Many scarcely blink if oil from a pipeline spills into a river, a forest is cleared for tar sands operations or agricultural land is fracked for gas. If Arctic ice melts and part of the Antarctic ice sheet collapses, well … they're far away.

Some see climate change as a distant threat, if they see it as a threat at all. But the scientific evidence is overwhelming: climate change is here, and unless we curb behaviors that contribute to it, it will get worse, putting our food, air, water and security at risk. A recent White House report confirms the findings of this year's Intergovernmental Panel on Climate Change Fifth Assessment report, and concludes global warming is a clear and present danger to the U.S.

"Climate change is not a distant threat, but is affecting the American people already," says White House science adviser John Holdren in a video about the report. "Summers are longer and hotter, with longer periods of extended heat. Wildfires start earlier in the spring and continue later into the fall. Rain comes down in heavier downpours. People are experiencing changes in the length and severity of allergies. And climate disruptions to water resources and agriculture have been increasing."

Recognizing the problem's severity is a start, but whether the U.S. will actually do anything is another question. Action to curb climate change is constantly stalled—thanks to the powerful fossil fuel industry, political and media denial, extensive fossil fuel-based infrastructure and citizen complacency.

But at least the U.S. and its president have unequivocally called for action. It's disturbing that political leaders in Canada—a northern country already feeling impacts, with a long coastline particularly vulnerable to rising sea levels—ignore the issue in their drive to make Canada a petro-power. Our government prefers to spend taxpayers' money to support the fossil fuel industry with advertising campaigns and billions of dollars in subsidies. A recent New York Times ad, worth US$207,000, touts oil sands and pipelines as "environmentally responsible." Despite opposition from communities throughout B.C. and the rest of Canada, including many First Nations, approval of the Enbridge Northern Gateway pipeline project is expected next month.

Perceived economic benefits (mostly short-term) trump the needs of all Canadians and their children and grandchildren for clean air and water, healthy food and a stable climate. Droughts, floods, water shortages, insect-plagued forests, extreme weather events, rising sea levels and melting glaciers don't matter as much as getting the oil, gas and coal out of the ground and sold as quickly as possible.

B.C. once showed promise with climate policies such as a carbon tax. Now the government in my home province is also pinning its hopes on the fossil fuel market, fracking our way to "prosperity" at the expense of long-term human and economic health, farmland and climate.

How can we allow governments and industry to continue leading us down this destructive path?

Some people say we must choose between the human-created economy and the natural environment—an absurd argument on many levels, and a false dichotomy. Even within the current flawed economic paradigm, it's far more financially sound to invest in renewable energy and diversification than in a dying industry.

Others, often driven by fossil fuel industry propaganda, doubt the evidence and question the credentials of thousands of scientists worldwide studying the issue.

The IPCC report involved hundreds of scientists and experts worldwide who analyzed the latest peer-reviewed scientific literature and other relevant materials on climate change. The White House report was overseen by 13 government agencies, including the U.S. Environmental Protection Agency, NASA, Department of the Interior, Department of Defense and National Oceanic and Atmospheric Administration. It was written by close to 300 scientists and experts and reviewed by numerous others, including the National Academy of Sciences. It was also vetted by groups ranging from oil companies to environmental organizations. As an article on Desmog Blog points out, "If anything, this report is conservative in its findings."

The IPCC and White House reports are clear: solutions are available. But the longer we delay the more difficult and expensive they will be to implement. We can't just sit by and do nothing.