Mountaintop Removal: It's Time to Bring This American Tragedy to an End 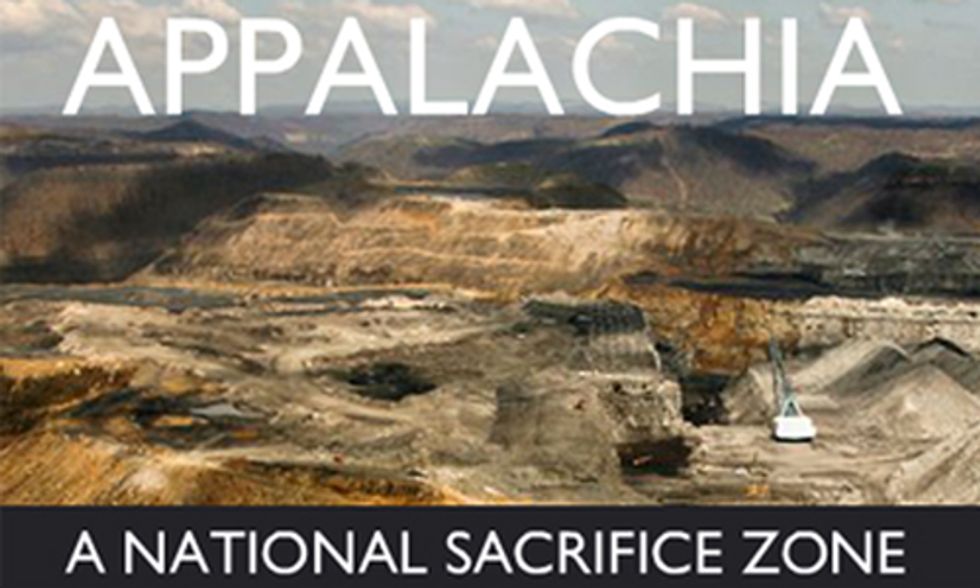 An escalating series of lawsuits, government rulings, banking decisions and breakthrough health studies has brought the fate of devastating mountaintop removal mining in central Appalachia to the doorstep of state and federal decision-makers this week.

Mountaintop removal is not just on the ropes—it's down for the count—and several fronts carry the same knockout message: Given the urgent health crisis from the reckless mining operation, the federal government and the states can no longer wait to act.

"Mountaintop removal is an immoral crime against nature and our citizenry, and it must be abolished, not regulated." — Jeff Biggers, author of The United States of Appalachia

First, after witnessing the mounting health crisis and death toll of friends, family members and miners, citizens living in the fallout of the massive strip mining movements have finally prodded West Virginia state officials to review the more than two dozen peered-reviewed health studies on the impacts of mountaintop removal operations, including a recent study that "shows that dust collected from MTR [mountaintop removal] communities promotes lung cancer."

Second, on the heels of a galvanized "People's Foot" movement rally at the West Virginia Department of Environmental Protection on Monday, a powerful notice of intent to sue the Obama administration was filed by attorney Patrick C. McGinley, a 40-year titan in coal safety laws and West Virginia University law professor, for its failure to prepare and implement a federal program for West Virginia's documented oversight and violations of required strip mining regulations.

While the Obama administration hedges on its required duty to takeover the mountain state's disastrous agency, McGinley's brief on behalf of several environmental groups reads like a spellbinding rap sheet of an incorrigible offender.

Third, the White House announced today its review of the Bush-era "stream buffer rule" is finally within sight, after years of regulatory banter and litigation.

Fourth, a renewed grassroots movement is returning to Washington DC to get Congress to pass the recently reintroduced Appalachian Community Health Emergency Act, which calls for a moratorium on mountaintop removal operations until a federal health study takes place.

And fifth, national environmental groups have recently filed an additional lawsuit against the Obama administration's Environmental Protection Agency for its failure to properly enforce the Clean Water Act on mountaintop removal operations.

If we go back to the first mountaintop removal blast in Cannelton Hollow in Fayette County, West Virginia in 1970, an estimated 5.5 million pounds of explosives have been detonated on mountaintop removal operations in central Appalachian communities for 16,400 days.

"Citizens' groups have been forced to demand federal enforcement because the West Virginia Department of Environmental Protection has failed to do its job," said Vernon Haltom, executive director of Coal River Mountain Watch. "Our communities and health suffer because the state lets the mining industry get away with polluting at will."

It's time to bring this American tragedy to an end.