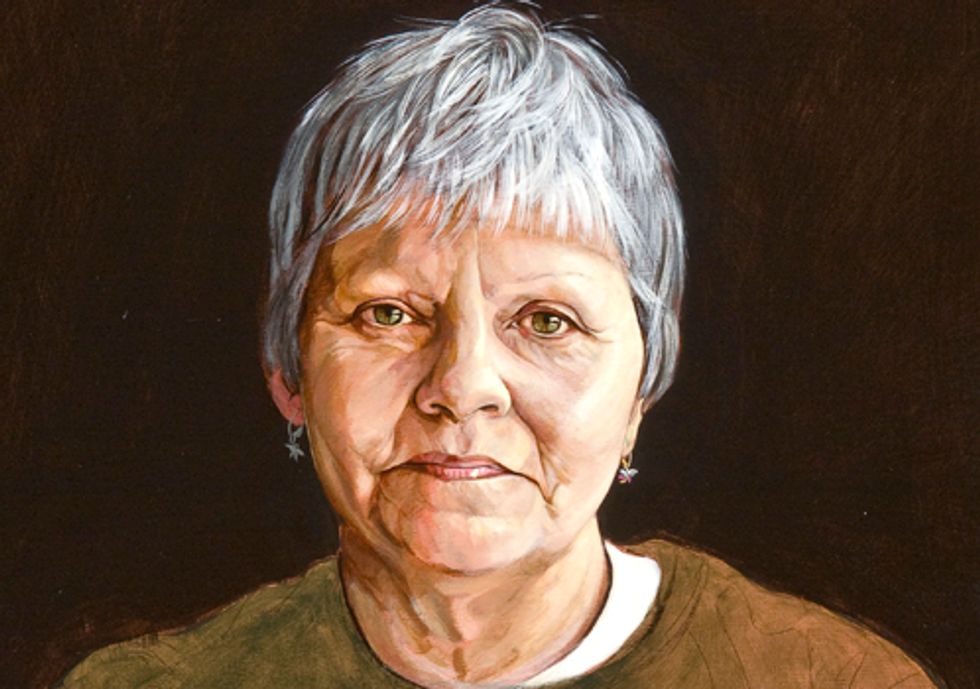 On the first anniversary of her untimely death, Judy Bonds' legacy remains as vital as ever to besieged and largely abandoned American citizens defending their lives and land from the fallout of reckless mountaintop removal operations in the central Appalachian mine fields.

Jan. 3 is day 12,580 of the mountaintop removal mining disaster, the most egregious human rights and environmental violation in our country—and perhaps one of the most discussed but shamefully ignored humanitarian crises in our nation.

"Judy Bonds was my leader and my friend," said Bob Kincaid, president of the Coal River Mountain Watch organization that Bonds led for nearly a decade. "She helped a lot of us to learn to be proud of our hillbilly heritage, to fight for and save it. Today, on the first anniversary of her passing, we re-dedicate ourselves to bringing to an end the profiteering processes that yielded up the poisons that helped kill her. Nothing short of the outright abolition of the crime against humanity that is mountaintop removal will suffice to serve her heroic memory."

In 2012, Judy Bonds' work as the godmother of the anti-mountaintop removal movement in the West Virginia coalfields and as a national clean energy ambassador still burns as a reminder that that will be no clean energy policy, no climate change agreement and no social justice in the coalfields if we can't even end mountaintop removal, an undeniably disastrous and deadly strip mining process that provides less than 5-7 percent of our national coal production.

Will President Obama have a "Truman moment" and finally address mountaintop removal in the 2012 elections?

Will national green organizations place mountaintop removal back onto the front burner this year?

Will a national abolitionist campaign emerge to bolster the courageous efforts of citizens and organizations on the coalfield frontlines?

Will our nation ever create a Coalfields Regeneration Fund to assist displaced coal mining communities and work toward a just transition for a clean energy future?

Jeff Biggers: After 40 years of devastating mountaintop removal operations, why hasn't our country brought a halt to this form of mining?

Bob Kincaid: You've asked me why we can't end mountaintop removal and, after much thought on the topic, the first thing that comes to mind is that we don't yet have enough people who WANT to end it. Not enough people recognize it for what it is: a human rights/human health crisis of monumental proportions unfolding right under America's nose in one of its most historically neglected areas.

Many have approached mountaintop removal from the standpoint of an "environmental" problem. Let's be clear: that has not worked. Neither is it likely to work any time in the foreseeable future. The end of mountaintop removal will come when, and ONLY when people recognize that it's not some negligibly esoteric debate over birds and bugs (as the multi-million dollar ad campaigns of the coal industry have cast it), but an existential struggle for the right of people living in central Appalachia to live their lives, without the looming specter of toxic waste dams and high walls, of blasting and poisoned water, of ruined home foundations and ruined human organs.

JB: What's the urgency in stopping mountaintop removal? Why should activists or citizens groups outside of the Appalachian coalfields do to join Appalachians?

BK: The science now is clear: mountaintop removal and its associated processes are killing people, deforming our babies and have been doing so for as long as it has been going on. No "mitigation" will solve the problem. There is no "acceptable" number of cancers suitable in exchange for Don Blankenship or Kevin Crutchfield's obscene wealth.

Mountaintop removal and its various other nicknames must be abolished, and abolished because the cancers and other diseases it carries are a form of human bondage. In short, the effort to end mountaintop removal must become no less an abolitionist movement than the movement to end slavery a hundred and fifty years ago, for the enslavement of a people to ANY economic effort, whether it be King Cotton or King Coal, cannot be tolerated by any society that considers itself civilized.

It is telling, then, that there is not ONE national campaign in the United States whose single-minded goal is to eliminate mountaintop removal. We have an abundance of campaigns that mention mountaintop removal tangentally, or acknowledge that mountaintop removal coal fuels power plants. We do not, however, have a single-focus campaign whose only purpose is to put an end to the Appalachian Apocalypse.

It is well past time such a campaign came into existence. Those of us who have labored long to end mountaintop removal are now prepared to shoulder the whole load going forward. We will no longer be someone's fund-raising object. We will no longer be part of a larger picture. Our world, Appalachia, IS our picture, and we are determined to show that picture to a wider spectrum of our fellow Americans, our fellow humans, until the great, moral weight of Justice demands our agony be ended.

We hillbillies ARE human, and this is our right.