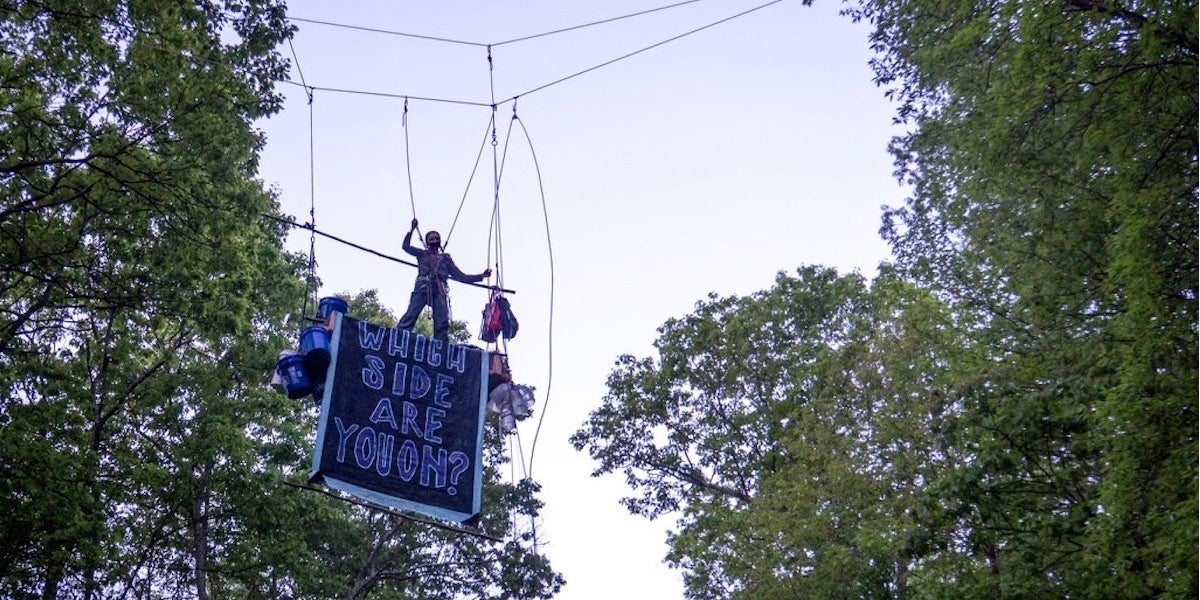 On Monday morning, a woman named Fern MacDougal strung up a platform 30 feet in the air that is suspended by ropes tied to surrounding trees in Virginia’s Jefferson National Forest.

MacDougal is now the ninth person in the last 85 days to stage tree-sits across the pipeline route in order to block its construction, according to Appalachians Against Pipelines. Her “aerial blockade,” as the resistance group calls it, is located on Pocahontas Road, which Mountain Valley plans to use to reach a construction site.

Opponents of the proposed Mountain Valley Pipeline, whose route cuts through one of the country’s most iconic hiking trails, worry about its threat to the area’s water supply and to wildlife habitat, as well as its potential harm to recreational lands and the health of surrounding Appalachian communities. Environmental groups also warn that the project sets a terrible precedent of building energy infrastructure through national forests.

“Cutting through delicate karst topography and 300 miles of contiguous forest and family farms seized by eminent domain, MVP threatens to damage the health and wellbeing of poor and oppressed communities along the pipeline route by threatening the air, soil and water,” said MacDougal in a statement.

She added, “This pipeline will catalyze the growth and expansion of gas extraction across Appalachia, an industry which has already caused permanent harm to many communities. We are dedicated to resisting this reckless endangerment of the land and people as long as MVP continues to operate.”

MacDougal was inspired to follow the activism of a fellow tree-sitter named “Nutty,” who has protested from her monopod a few miles up Pocahontas road since March 28, and by David Buckel, a civil rights lawyer who died last month after setting himself on fire to protest environmental destruction.

Posters at MacDougal’s site declare, “WHICH SIDE ARE YOU ON?” and “STILL HERE.” 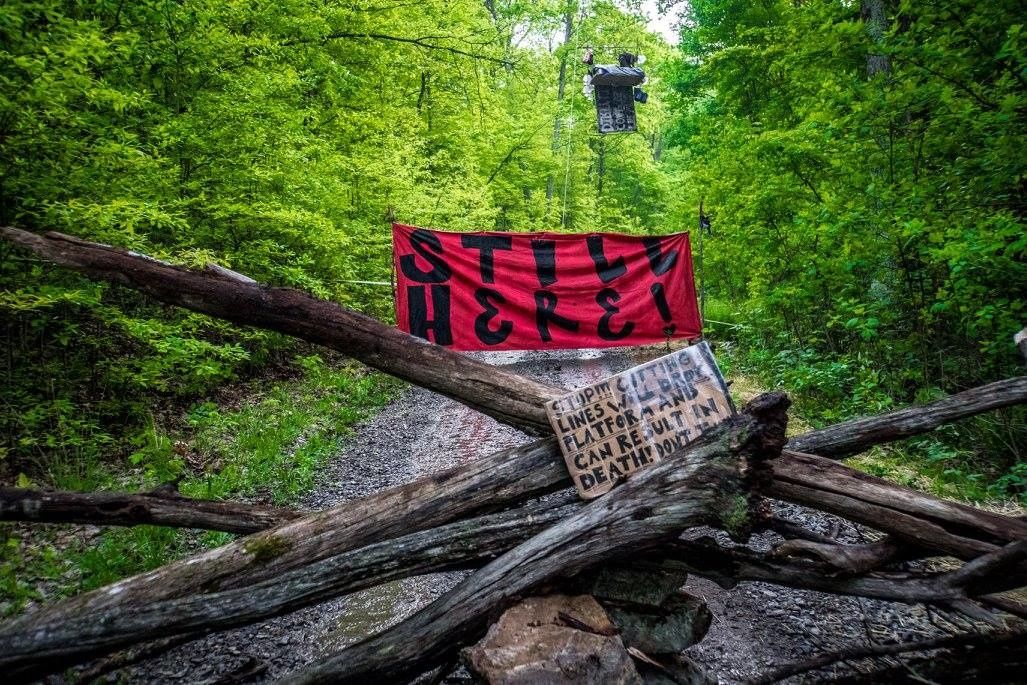 In a Facebook update after her first day, MacDougal said the Forest Service was “really angry when they saw that I was here.”

Tree-sits have popped up in at least five locations along the pipeline route. The oldest site is still occupied by a man named “Deckhard,” who has been stationed at his platform on the West Virginia side of Peters Mountain since Feb. 26.

Mountain Valley has sued several hundred landowners in West Virginia and Virginia to invoke eminent domain to allow it to cut trees and run the pipeline through their properties. One such landowner, Red Terry, a 61 year woman, and her daughter “Minor,” camped for more than a month in a treehouse on their own land before court-ordered fines and the threat of forced removal brought them down, Rolling Stone reported.

According to the Independent, Mountain Valley has urged judges to remove some of the tree sitters but has been unsuccessful. The Forest Service also issued a “closure order” within 200 feet of the proposed pipeline route, which they say is to protect the public from any construction hazards.

However, pipeline opponents say the order has prevented re-supplies of food and water to the tree-sitters. Attempts to bring supplies to the sitters has already led at least three arrests, Outside Online reported.

Rolling Stone reported that two Charlottesville physicians who sought to perform a wellness check on Nutty were denied access near her platform.

Mountain Valley has said that the pipeline will be in operation by the end of this year. However, Appalachians Against Pipelines, which is raising funds to stop the project, said the presence of tree-sitters has already caused a significant delay in construction for more than 50 days.