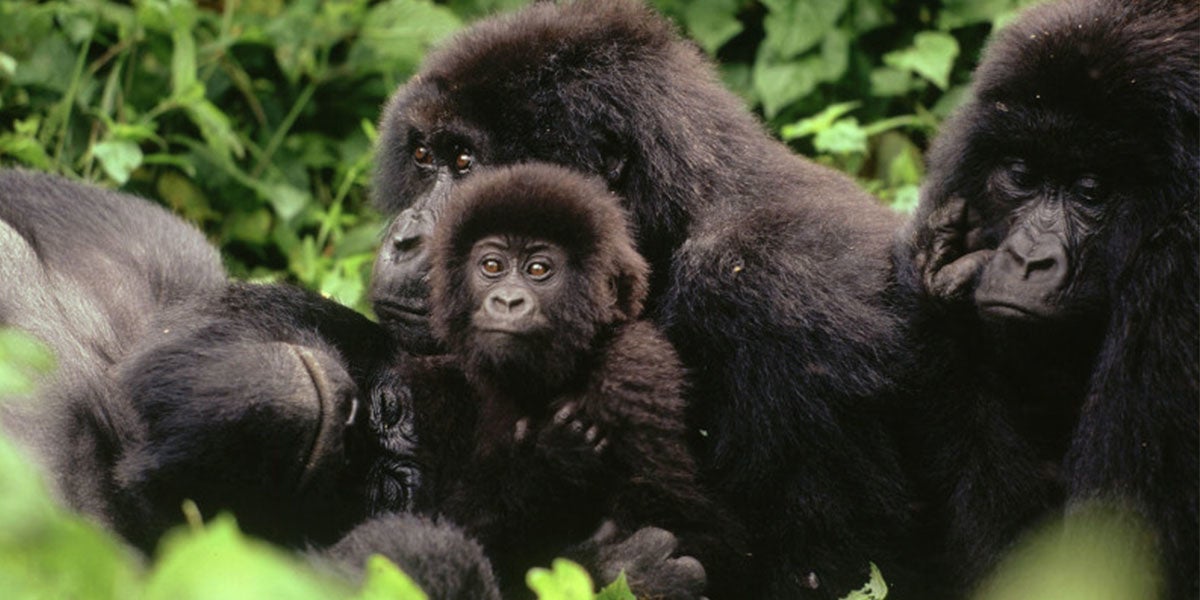 Numbers of critically endangered mountain gorillas are on the up, following conservation efforts in the transboundary Virunga Massif, one of the two remaining areas where the great ape is still found.

Survey results released Thursday reveal that numbers have increased to 604 from an estimated 480 in 2010, including 41 social groups, along with 14 solitary males in the transboundary area. This brings the global wild population of mountain gorillas to an estimated 1,004 when combined with published figures from Bwindi Impenetrable National Park (where the rest of the sub-species is found) and makes it the only great ape in the world that is considered to be increasing in population.

The findings are the result of intensive surveying coordinated by the Greater Virunga Transboundary Collaboration and supported by the International Gorilla Conservation Programme (IGCP—a coalition program of Fauna & Flora International (FFI) and World Wildlife Fund WWF) along with other partners.

Despite this good news, the survey found that direct threats from wire or rope snares persist. During the surveys, the teams found and destroyed more than 380 snares, which were set for antelope but can also kill or harm gorillas. One of the snares discovered by the teams contained a dead mountain gorilla. There are also new threats looming large on the horizon, including climate change, infrastructure development and the ever-present specter of disease, which has the potential to devastate the remaining populations.

Ongoing conflict and civil unrest in the region also present an ongoing risk, impacting people and wildlife. A number of rangers have been killed in recent weeks in the Democratic Republic of Congo’s Virunga National Park.

“This is fabulous news for mountain gorillas and shows what we can do for wildlife when NGOs, governments and their communities work together,” said Margaret Kinnaird, wildlife practice leader with WWF. “The mountain gorilla story can be a model for how to restore and maintain our earth’s precious biodiversity,” she added.

“Since FFI first began working to protect mountain gorillas in the 1970s, we have seen a remarkable transformation in the fortunes of this great ape, which at that time was on the very precipice of extinction,” said Alison Mollon, director of operations for Africa at FFI. “This turnaround is thanks to the extraordinary efforts of all those who have persisted through immense challenges—sometimes even risking their own lives—to protect these great apes.”

The census involved twelve teams—comprising people from more than 10 institutions—which covered more than 2,000 kilometers (approximately 1,243 miles) of difficult, forested terrain systematically searching the mountain gorilla habitat for signs of the animals, recording nest sites and collecting faeces samples for genetic analysis. The teams also looked for evidence of threats to gorillas and other wildlife.

Reacting to the news, FFI vice president and WWF-UK ambassador Sir David Attenborough said: “When I first visited the mountain gorillas in 1979, the situation was dire; the number of these remarkable animals was dreadfully small. It is incredibly heartening therefore to see how the efforts of so many different groups—communities, governments, NGOs—have paid off. The threats to mountain gorillas haven’t disappeared entirely, of course, so now the challenge must be to ensure that these achievements are sustained long into the future.”

The survey results underscore the need for continued attention and action by government agencies, protected area staff, tourism operators, tourists and communities alike, to ward off these threats and keep mountain gorillas safe in the long term.