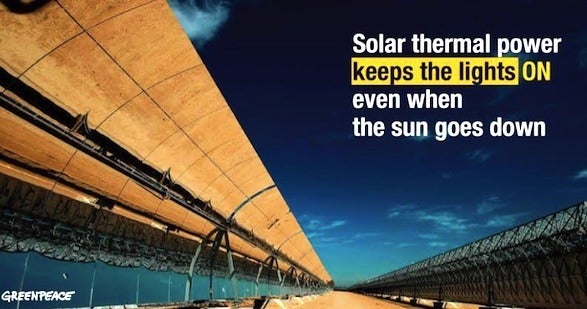 Morocco’s King Mohammed VI switched on the first phase of the world’s largest concentrated solar plant today in the southern town of Ouarzazate. A ceremony was held to officially inaugurate Noor 1 and break ground on the second phase which includes the Noor 2 and 3 projects.

Noor 1 provides 160 megawatts (MW) of electricity for 650,000 local people with power from dawn until three hours after sunset, The Guardian reported.

Many people speak, but Morocco acts. the biggest solar powerplant opens today thanks to the King's vision with Masen pic.twitter.com/lFp0mDqpWO

The final two phases for the project are set to finish construction in 2018. Ultimately, the plant will have a 580 MW capacity and provide energy to more than 1 million people.

The project is called a “concentrated solar plant” because it consists of a large number of movable mirrors that can follow the sun’s path and harness sunlight to melt salt. The molten salt stores energy and can be used to power a steam turbine, allowing for energy production even when the sun isn’t shining.

How we power the world is changing. As Morocco turns on the biggest solar plant ever, @BP_plc & @Shell profits tank pic.twitter.com/JLGCKPEQHC

The plant is aimed at reducing the African country’s carbon emissions. According to a press release from Climate Investment Funds, which provided $435 million to the $9 billion project, “the solar plant underlines the country’s determination to reduce dependence on fossil fuels, use more renewable energy and move towards low carbon development.”

As EcoWatch mentioned previously, Morocco has been dependent on fossil fuels and imports for nearly 97 percent of its energy, making the solar complex all the more promising.