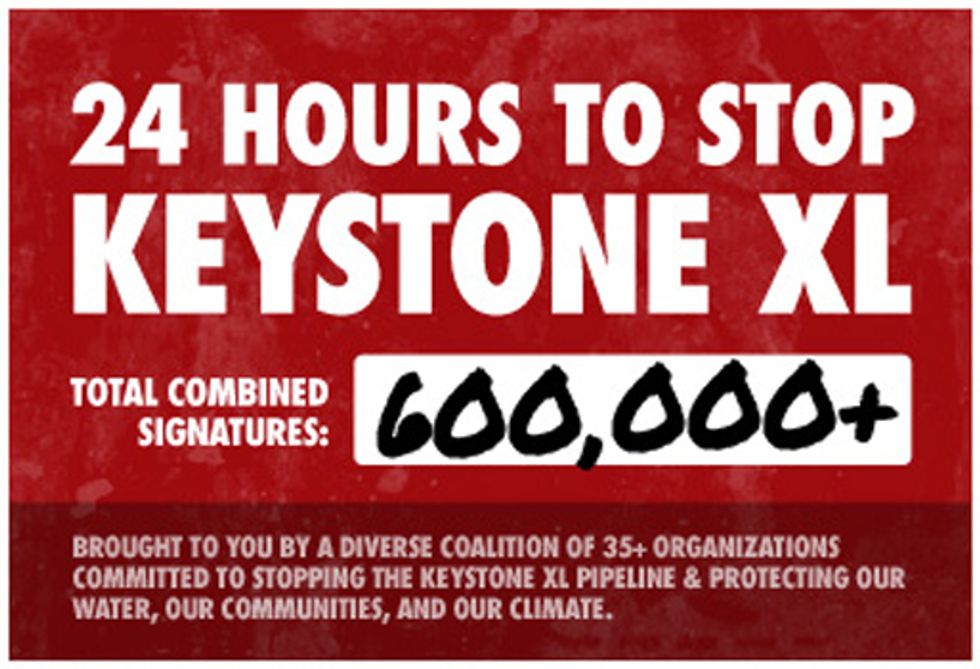 Once again it is the many versus the money. Starting at noon on Feb. 13, a coalition of thirty or so environmental organizations, including Oil Change International (OCI) and 350.org set out to gather at least 500,000 signatures with 24 hours to stop the controversial Keystone XL pipeline.

The initiative came as a response to moves within the Senate to vote as early as Feb. 14 on a deal that would give the green light to the construction of the pipeline.

As Steve Kretzmann, the director of OCI said on Feb. 13, “After President Obama rejected Keystone XL last month, many Senators are rushing to resurrect it in order to protect their friends—Big Oil. As you read this, the oil industry is tightening the screws on the remaining senators they need to get this thing passed.”

The Washington Post reports that the bill currently has the backing of 44 Republicans and one Democrat, although Senate Democratic leaders oppose it.

The Post argues that “the amendment indicates the debate over TransCanada’s Keystone XL pipeline—which would transport heavy crude from Canada’s oil sands to Gulf Coast refineries—will continue to help define the two parties this election.”

These will be delivered later today to the offices of Senate Majority Leader Harry M. Reid (D-NV) and Minority Leader Mitch McConnell (R-KY). Gene Karpinsky, who heads the League of Conservation Voters, told ENS Newswire that handing over 50 giant boxes each holding 10,000 signatures would be a “unified show of our power: our voices against the dollars of Big Oil.”

“Anyone who thought environmentalists were graying into irrelevance was wrong,” added Bill McKibben, the co-founder of 350.org, and one of the leading opponents of the pipeline.

McKibben continued, “The arguments by now are clear. This pipeline won’t create jobs (that’s why the biggest labor unions in the country support the president). It puts the heartland of the country at risk from spills—the kind of leaks that devastated the Yellowstone and Kalamazoo Rivers in the year past. And after the year with the most weather disasters in the nation’s history, and amidst this weird and out-of-kilter winter, the fight against climate change must start here.”

So if you haven’t already, go here and sign the petition that says, “Senators—Block any efforts to revive the dangerous Keystone XL tar sands pipeline.”

So why take the time to do it? As Steve Kretzmann says, the petition “will be a unified show of our power—our voices against the dollars of the fossil fuel industry.”