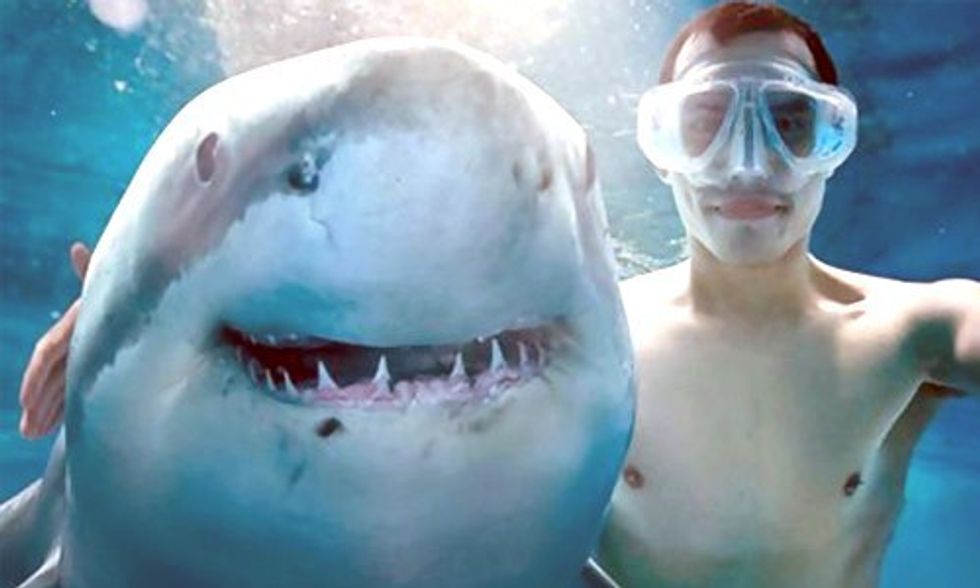 The media hype over shark attacks reached insane levels this year. This led conservationists like Richard Branson, Shark Attack Survivors for Shark Conservation and The Pew Charitable Trusts to support efforts to restore and conserve the world’s shark populations—warning against turning an uptick in attacks into "an excuse to kill more sharks." After all, humans kill far more sharks every year—at least 100 million more—than sharks kill people.

And get this: According to Mashable, more people have died from selfies than shark attacks this year. Earlier this month, a park in Colorado had to close because too many people were getting dangerously close to bears to take selfies. And this was no isolated incident. Wildlife authorities in the Lake Tahoe area, Yellowstone National Park and other recreation areas have repeatedly cautioned visitors against getting too close to bears, bison and other large animals.

The latest death by selfie happened when a 66-year-old Japanese tourist died, and his travel companion was injured, after falling down stairs while attempting to take a selfie at the Taj Mahal. "The man's death raises the selfie toll this year to 12," says Mashable. "To put that in perspective, in 2015 there have so far been eight deaths caused by shark attacks."

This seems like a joke right? Sadly, it's not. "Other deaths have been caused by distracted photo-takers falling off cliffs, crashing their cars, being hit by trains, and even shooting themselves while posing with guns," said Science Alert. "It's not clear if the number of daredevil selfies is increasing, but more and more tourists are making headlines because of their dangerous attempts at a memorable photo," says Mashable.

This has left many prominent places no choice but to ban selfies or—at least selfie sticks in the case of Disney. Pamplona banned selfies at its famed running of the bulls last year. The Tour de France is concerned about selfies endangering people, too.

Australia has issues with dare devils taking selfies too. They can't get people to stop taking pictures on this rock that is on the verge of crumbling into the ocean.

And it's been such a problem in Russia that the government launched a campaign to warn people about the dangers of selfies.