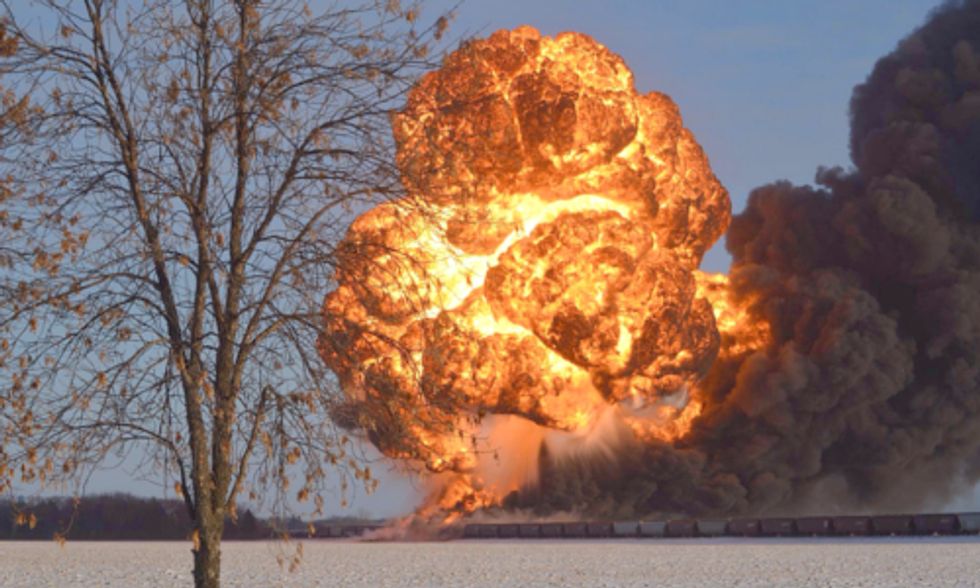 As a direct result of the Bakken shale oil boom, more crude oil was spilled from rail cars last year than in the previous four decades combined. That’s according to a McClatchy analysis of federal data from the Pipeline and Hazardous Materials Safety Administration (PHMSA), which governs rail transport of liquid fuels like crude.

The fireball that followed the derailment and explosion of two trains, one carrying Bakken crude oil, on Dec. 30, 2013, outside Casselton, ND. Photo credit: PHMSA

The analysis revealed more than 1.15 million gallons of crude spilled in 2013, considerably more than the 800,000 gallons spilled from 1975 (when the government started collecting data on spills) to 2012.

The rail industry likes to boast a 99.99 percent success rate in delivery shipments without incident, and that number remained consistent in 2013, with 1.15 million of the roughly 11.5 billion gallons shipped by rail being spilled. What did change was the volume of actual crude being shipped by rail.

As we’ve covered before, there is a massive boom in crude-by-rail throughout North America, with a nearly 2400-percent increase in crude railcar shipments in five short years from 2008-2012. As it turned out, 2013 was another record-setting year.

These charts from the Association of American Railroads and the U.S. Energy Information Association show the trend pretty clearly:

Bakken crude production has become so dependent on trains that an official at North Dakota’s Mineral Resources Department claimed last month that 90 percent of the state’s crude would move by rail in 2014.

The McClatchy piece features an interactive map that allows you to see the size and location of every spill, year-by-year.

Several years show just a single spill. Most years, up until 2008, experienced fewer than a handful. There wasn't a single spill recorded in North Dakota until 2008, when the Bakken boom truly commenced and crude-by-rail took off in the region.

And here's 2013, where the predominant shipping routes from North Dakota to Gulf Coast refineries is clear:

You can explore the data and play around with the map at the bottom of the original McClatchy piece.

The McClatchy report doesn't factor any of the spills that have already occurred in 2014, nor derailments that occur north of the border in Canada, like the fatal Lac-Mégantic explosion in August.

Within the past year—and indeed the past few weeks—North American tracks have experienced a number of very high profile—and, again, in some cases fatal—crude-by-rail derailments, explosions and spills. Here's recent DeSmog coverage of some of the worst and most recent:

While derailments may still be statistically rare, the massive increase in overall shipments of Bakken crude on North American railways makes some incidents inevitable. Because of the chemical nature of Bakken shale oil, this presents a unique threat. On Jan. 2, the PHMSA announced that the crude oil being transported from the Bakken region "may be more flammable than traditional heavy crude oil."

According to U.S. Transportation Secretary Anthony Foxx, at a closed door meeting between federal regulators, railroad representatives and an official of the American Petroleum Institute earlier this month, the rail industry agreed to take voluntary steps to immediately make their crude-by-rail shipments safer. What exactly these voluntary measures would include is so far a mystery.

Meanwhile, regulators at PHMSA are expanding the so-called "Bakken blitz" to investigate the chemical makeup of crude from the Bakken shale plays in order to determine whether more strict regulations of their transport are necessary.