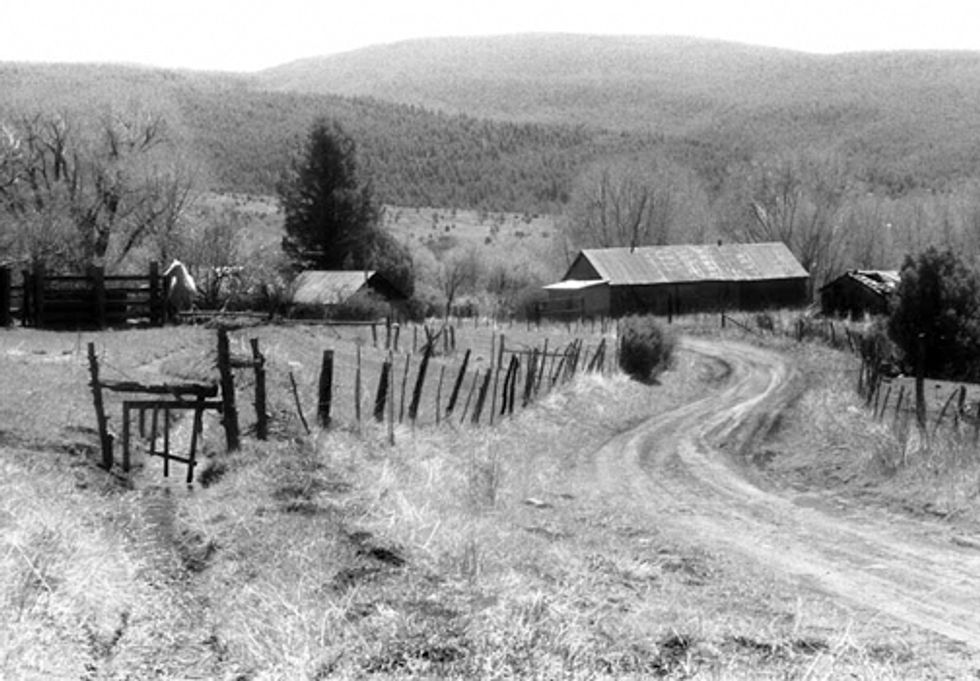 What is it that holds this county apart from other places in this vast landscape? The silence at dawn and dusk when all is still, when my awareness of my breath and heartbeat alert me to my aliveness? Is it possibly the prolonged dry and windy seasons that tear and strew everything about with hell’s might?

Or could it be the baking heat that draws insects to our parched fields and gardens when that is the last assault we can bear? Or is it the people who have lived here, then and now, who made their mark so deeply into the heart and soul of this land we call Mora County, New Mexico?

Could the land and the people be what is bringing about my own spiritual evolution and awakening my thirst for all that this community has valued for generations?

In a land of mountains, forests, fertile wet valleys and vast open plains, these Hispanic and Indigenous Jicarilla Apache people hold onto their ancestral values and nurture the old ways in spite of the onslaught of the 21st century. This has been a stunning glimpse for me into what I would call the mastery of self-determination and a healing gift for mankind.

Mora County’s population is 5,200 with 67 percent of its residents Spanish-speaking, who live in small community villages on ranches and farms. It is a place where people barter and help one another because this is a community that understands its connection to one another, as well as their relationship to the land.

All 1,944 square miles of the county’s rural landscape is unadulterated by industrial development, making it one of the last few places in the U.S. where a land-based culture has yet to look into the eyes of corporate industry.

But that is all about to change if Royal Dutch Shell has its way and industrializes this landscape for its hidden natural gas and the money it will bring them. But the citizens of Mora County appear to be aware of what could happen if the oil companies, who currently hold more than 144,000 acres of mineral leases, begin to drill.

They have heard from San Juan County, New Mexico ranchers, who like themselves, are caretakers of their ancestral lands, who have told them that if Mora County citizens “let the oil companies start their engines here, it will be all over for them” and that they would be “lucky to get a job as a dog catcher” or to safely drink their well water, let alone breathe clean air.

Most of the oil and gas wells that are proposed for Mora County would use the method of hydraulic fracturing, better known as fracking. Fracking is a means of natural gas extraction employed in deep natural gas well drilling. Once a well is drilled, millions of gallons of water, sand and toxic chemicals are injected, under high pressure, into a well. The pressure fractures the shale and props open fissures that enable natural gas to flow more freely out of the well.

The outrage over fracking for the people of Mora County reflects their understanding of all that natural gas development entails. Folks from Farmington, New Mexico, where more than 14,000 operating oil and gas wells have turned their once agricultural land into an industrial zone, speak about the proliferation of prostitution, amphetamine labs, housing shortages, arrests, and high asthma and cancer rates among children. Other reports reveal that in Pavilion, Wyoming, the aquifers now contain benzene, 2-BE and other carcinogenic chemicals where natural gas drilling is taking place. In these communities, there is often a significant rise in the cost of living that ultimately displaces local people from their land.

The people in Mora County understand what is at stake. The bottom line is our knowledge that the local culture will fade as their language is displaced and their ancestral adobes are ploughed under and built over with high rises and country homes in the mad frenzy to welcome the fossil fuel development.

Not unlike other communities, there is caution about how to move forward in the midst of such an affront. However, a citizen committee presented the three-member Mora County Commission with the Mora County Community Water Rights and Local Self-Government Ordinance in September 2011, which was modeled after Pittsburgh, Pennsylvania’s CELDF rights-based ordinance that bans oil and gas drilling and fracking. It contains a “Community Bill of Rights,” exerting people’s inalienable rights to clean water, air, land, health and safety. And, at the core of the ordinance, it exerts the right to local self-government and prohibits harm by industry and writes out corporate “personhood.”

This ordinance is outside the box of U.S. corporate-government intention, and today, more than 140 communities have passed these ordinances into law. With the brilliance of the Community Environmental Legal Defense Fund (CELDF), who developed and crafted these community rights-based ordinances, Mora County is exerting their rights to continue to protect all that has been long valued, and to stand in solidarity with the communities across the U.S. who have passed these before them.

Will what has continued to hold the people to their rural landscape and culture in Mora County weather the onslaught of this current corporate-government siege? Will the commission exert their authority on behalf of their ancestors and children? While this land holds sacred the water, people, air and animals, it will take the courage and moral compasses of each the Mora Commissioners to protect these ancestral rights.