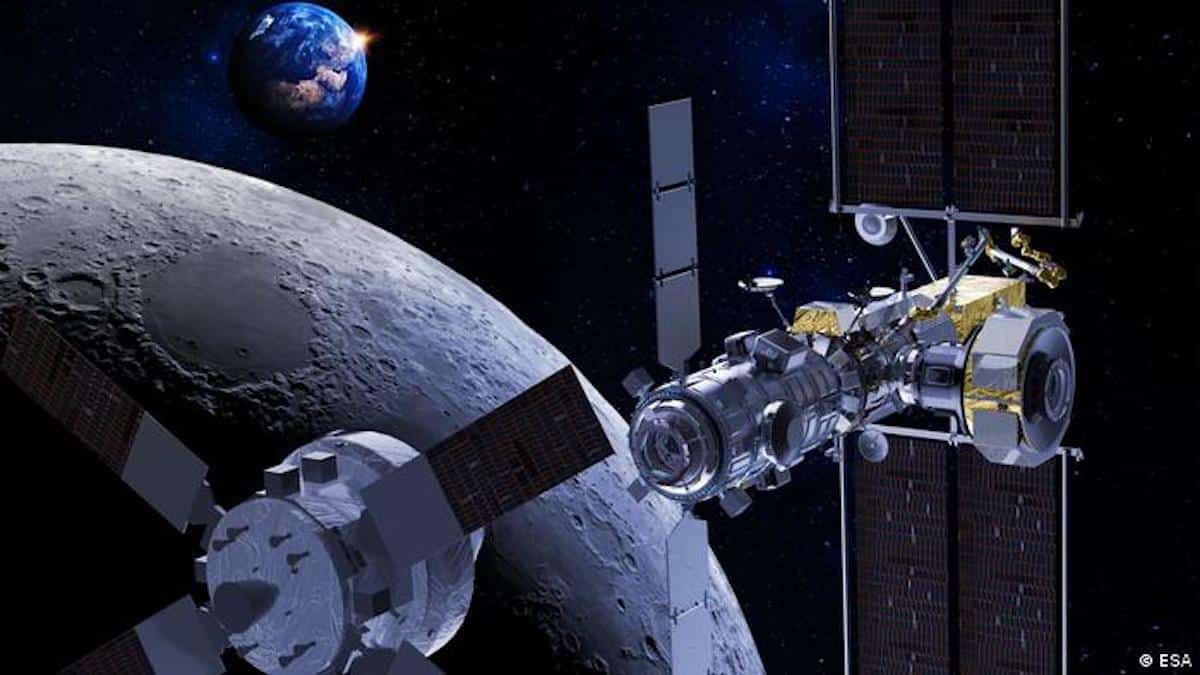 If you’ve ever been on a tour of a cleanroom — a sterile environment where engineers build and test satellites and other spacecraft — you will know it’s a pretty surreal experience.

You’re standing there, starring up at a rough and unfinished-looking object, seemingly wrapped in kitchen aluminum foil, with wires and solar panels sticking out at various angles and it’s tough imagining what the thing will actually do when it’s in an operational environment.

The engineers will tell you: This towering object is an instrument of precision and beauty. It will observe our planet Earth and deliver valuable data on our changing environment, monitor the oceans or track migration and military movements. 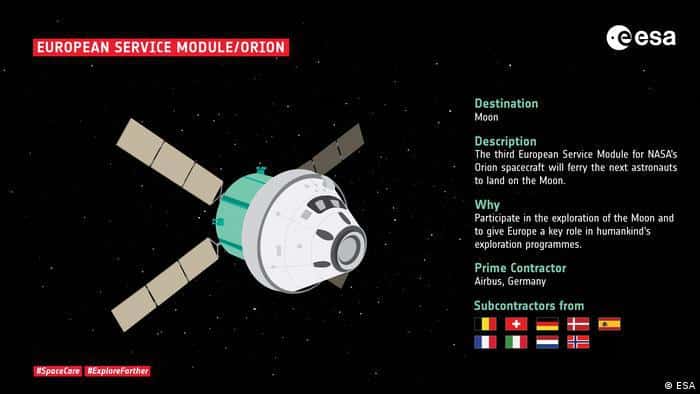 But it’s virtually impossible to truly get what that means. You’re unlikely to be one of the comparably few humans ever to see the thing in action, in situ.

So imagine how surreal it was to tour a spacecraft, or as DW did this Tuesday (February 2, 2021), a set of European Service Modules (ESMs), via a shaky YouTube channel.

You’re not in the cleanroom but in front of a computer screen. And the tour is a series of pre-recorded and pre-scripted video statements with bad sound. It was white noise — static — for the first ten minutes.

But we already know that the ESMs form an integral part of Orion, a human spacecraft that will fly astronauts to the moon and an orbiting lunar base called Gateway. We also know that Orion belongs to Artemis, NASA’s human spaceflight program that aims to get humans back to the moon by 2024.

So, we had a head start. And YouTube being YouTube, we got to watch the whole tour again later anyway.

Andreas Hammer, Airbus’s Head of Space Exploration, delivered opening remarks from a cleanroom in Bremen, where the event was meant to be held in person. Due to the COVID-19 pandemic, however, that got nixed. So, there he was, all alone, dressed in a white lab coat and hair net.

Right off the bat, Hammer said attempts to send humans back to the moon started in Bremen, where those ESMs are being constructed. And the ESMs, said Hammer, are the Orion’s “powerhouse.”

There are three ESMs so far. They will provide air, electricity and propulsion, thermal control and all the consumables for the astronauts, including oxygen and water. ESA has just commissioned a further three units from Airbus.

Without the ESMs, there would be no human spaceflight with Orion, no mission.

“Nothing in space is simple,” said Hammer’s colleague Didier Radola, who heads the Orion ESM program at Airbus, and as such, no one goes to space alone.

Artemis may be an American program but the Americans have drafted European know-how and technology to get the job done.

Hammer stood in front of ESM2, which is almost completely integrated and ready for the Artemis 2 mission, which will fly astronauts around the moon. It will be tested and handed over to NASA later this year.

ESM1 has already been delivered to the Americans. It’s scheduled to be integrated with the rest of the spacecraft, loaded with fuel and launched by the end of 2021.

“You can see propellant tanks, cables, electronic devices. It’s an incredible piece of machinery and I never get tired of getting totally amazed when I see and touch that,” said Hammer. 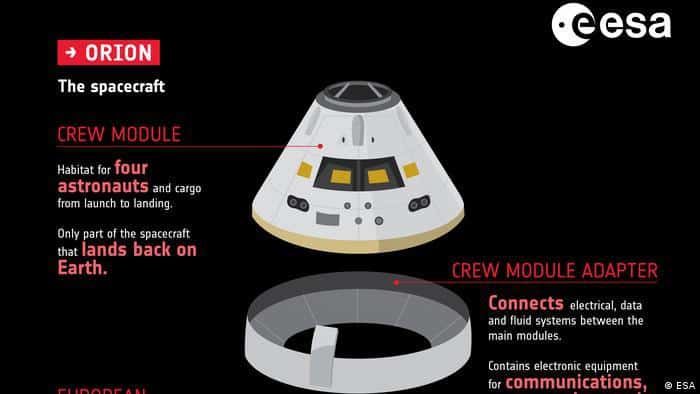 Back and Forth to Our ‘8th Continent’

German star astronaut Alexander Gerst also delivered some inspirational remarks about human travel to the moon, replete with the usual clichés. But Gerst is talented and he is a good communicator.

Gerst calls the moon “our 8th continent.” Going back to the moon will bring us the “knowledge of tomorrow,” he says, including science on living sustainably on Earth and long term on the moon. He’s also excited about bringing samples of moon and Mars rock back to Earth.

But later, during a Q&A session, ESA’s outgoing director general, Jan Wörner, reminded us, that he is not a fan of the phrase “going back to the moon.”

Saying were “going back” sounds too much like repeating what was last done during the Apollo moon missions between 1969 and 1972 — and that smacks of the Cold War era, said Wörner.

Instead, he wants us to go #ForwardToTheMoon. And then beyond — a reference to Mars and, no doubt, the three Mars missions (USA, UAE, China) that are about to arrive at the “Red Planet.” But whether humans get back to the moon by 2024 depends, says Wörner, on the priorities of America’s new political administration under President Joe Biden.

So, we’ll have to “look forward” to see what happens. There is one area, however, where the space community seems entirely backward-looking.

Men, Women and All?

During the Q&A session, talk turned to the lucky astronauts who would get to fly first on Orion.

Walther Pelzer, Director General of the German Space Agency (DLR), spoke highly of Gerst’s chances: “Of course we’re interested in having a European astronaut with a German passport among them,” said Pelzer. “But he should be experienced. He should have shown that he’s a good leader, and Gerst showed he was an exceptional leader when he was commander of the International Space Station (ISS) and the mission didn’t go as planned.” That’s our emphasis on all those he’s.

Those comments, while true, seemed to ignore that a “she” or gender-neutral individual may possess those very same qualities, too.

DW just had to follow-up. We asked: “What is ESA actively doing to address the gender imbalance in space?”

So far, the bulk of astronauts who have been able to gain any experience at all — whether that’s given them exceptional qualities or not — have been men. Ergo, the opportunities to be among the first to fly on Orion will be skewed in favor of men.

Jan Wörner smiled and said progress started with the language we all use.

“If you say ‘manned spaceflight,’ then it’s already decided,” said Wörner, “and that’s not good. So, it’s better to talk about human spaceflight or, in German, “astronautische Raumfahrt” (astronautical spaceflight).

Sometimes, said Wörner, “I’ve hidden behind what happened in the past and during the last class of astronauts we only had about 16% female candidates but that’s not a good argument for the future and ESA will do what it can to promote female astronauts.”

David Parker, ESA’s Director of Human and Robotic Exploration, then added that Italy’s Samantha Cristoforetti would return to the ISS and therefore gain the same level of experience as the rest of the European astronaut corps. “So, I don’t know why you would discount her chances,” he said. We at DW certainly don’t.

“Yes,” said Pelzer, “ESA’s new DG [director general] is a man, but we just appointed Rathsman as the chair of the ESA Council, so we are going in the right direction.”

Looking at the faces on the call, however, all the official representatives were men. And that is the overall picture at ESA, where 10 of the 11 top jobs are held by men, and Wörner’s replacement, Josef Aschbacher, who will assume the role later this year, was chosen from a largely male list of candidates (one source told us it was roughly 85% male).

Our virtual tour and call ended with an odd feeling of deflation.

You normally get a chance to chat to familiar faces, colleagues from other media outlets, while the room empties. You might even get some feedback. But not here, where one gets the nagging feeling that virtual tours suit ESA’s style. It’s easier to control the message when the tour is pre-recorded and the moderator can mute unruly journalists.