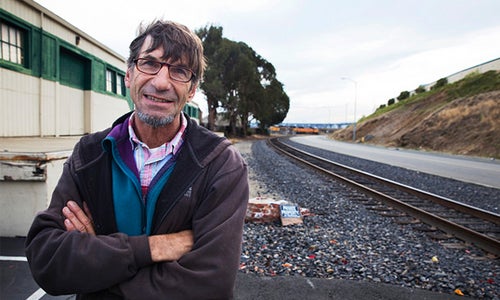 Ed Ruszel’s workday is a soundtrack of whirling, banging, screeching—the percussion of wood being cut, sanded and finished. He’s the facility manager for the family business, Ruszel Woodworks. But one sound each day roars above the cacophony of the woodshop: the blast of the train horn as cars cough down the Union Pacific rail line that runs just a few feet from the front of his shop in an industrial park in Benicia, California. 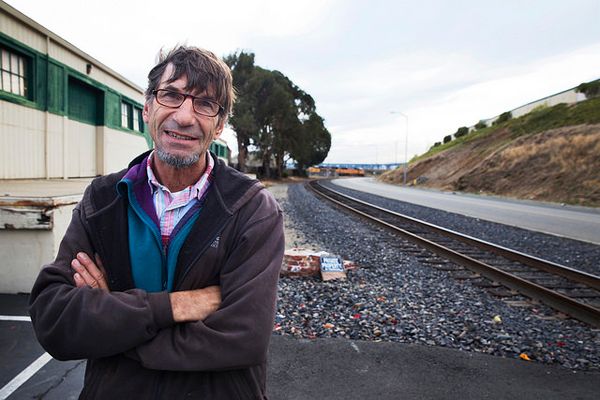 Ed Ruszel’s family business is in an industrial park in Benicia, CA, where Valero Energy is hoping to build a new rail terminal at its refinery to accept 70,000 barrels of crude oil a day. Photo credit: Sarah Craig

Most days the train cargo is beer, cars, steel, propane or petroleum coke. But soon, two trains of 50 cars each may pass by every day carrying crude oil to a refinery owned by neighboring Valero Energy, which is hoping to build a new rail terminal at the refinery that would bring 70,000 barrels a day by train—or nearly 3 million gallons.

Crude-by-rail has increased 4,000 percent across the country since 2008 and California is feeling the effects. By 2016 the amount of crude by rail entering the state is expected to increase by a factor of 25. That’s assuming the industry gets its way in creating more crude-by-rail stations at refineries and oil terminals. And that’s no longer looking like a sure thing.

Valero’s proposed project in Benicia is just one of many in the area underway or under consideration. All the projects are now facing public pushback—and not just from individuals in communities, but from a united front spanning hundreds of miles. Benicia sits on the Carquinez Strait in the northeastern reaches of the San Francisco Bay Area. Here, about 20 miles south of Napa’s wine country and 40 miles north of San Francisco, the oil industry may have found a considerable foe.

A recent boom in “unconventional fuels” has triggered an increase in North American sources in the last few years. This has meant more fracked crude from North Dakota’s Bakken shale and diluted bitumen from Alberta’s tar sands.

Unit trains are becoming a favored way to help move this cargo. These are trains in which the entire cargo—every single car—is one product. And in this case that product happens to be highly flammable.

This is one of the things that has Ed Ruszel concerned. He doesn’t think the tank cars are safe enough to transport crude oil in the advent of a serious derailment. If a derailment occurs on a train and every single car (up to 100 cars long) is carrying volatile crude, the dangers increase exponentially. In 2013, more crude was spilled in train derailments than in the prior three decades combined, and there were four fiery explosions in North America in a year’s span, the worst being the derailment that killed 47 people and incinerated half the downtown in Lac Megantic, Quebec in July 2013.

In Benicia, Draft Environmental Impact Report (DEIR) regarding the Valero project was released in June 2014 and promptly slammed by everyone from the state’s Attorney General Kamala Harris to the local group Benicians for a Safe and Healthy Community because it left out crucial information and failed to address the full scope of the project.

One of the biggest omissions in Valero’s DEIR was Union Pacific not being named as an official partner in the project. With the trains arriving via its rail lines, all logistics will come down to the railroad. Not only that, but the federal power granted to railroad companies preempts local and regional authority.This preemption is one of the biggest hurdles for communities that don’t want to see crude-by-rail come through their neighborhoods or want better safeguards.

The DEIR also doesn’t identify exactly what kind of North American crude would be arriving and from where. Different kinds of crude have different health and safety risks. Diluted bitumen can be nearly impossible to clean up in the event of a spill and Bakken crude has proved more explosive than other crude because of its chemical composition. It’s likely that some of the crude coming to Valero’s refinery would be from either or both sources.

Public comments on the DEIR closed on Sept. 15, and now all eyes are on the planning department to see what happens next in Benicia.

But the Valero project is just the tip of the iceberg in California. 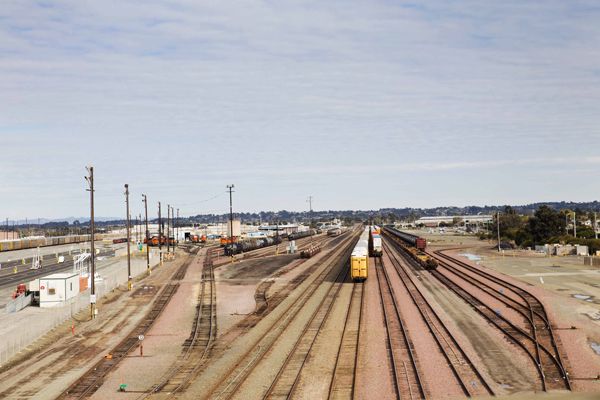 In nearby Pittsburgh, 20 miles east of Benicia, residents pushed back against plans from WestPac Energy. The company had planned to lease land from BNSF Railway and build a new terminal to bring in a 100-car unit train of crude each day. The project is currently stalled.

But Phillips 66 has plans for a new rail unloading facility at a refinery in Nipomo, 200 miles south of the Bay Area in San Luis Obispo County, that would bring in five unit trains of crude a week, with 50,000 barrels per train.

Further south in Kern County in the heart of oil country, Plains All American just opened a crude by rail terminal that is permitted for a 100-car unit train each day. Another nearby project, Alon USA, received permission from the county for twice as much but is being challenged by lawsuits from environmental groups.

With all this crude-by-rail activity, some big picture thinking would be helpful. As Attorney General Kamala Harris wrote about the Benicia project, “There’s no consideration of cumulative impacts that could affect public safety and the environment by the proliferation of crude-by-rail projects proposed in California.”

A longer version of this story appeared on Faces of Fracking.