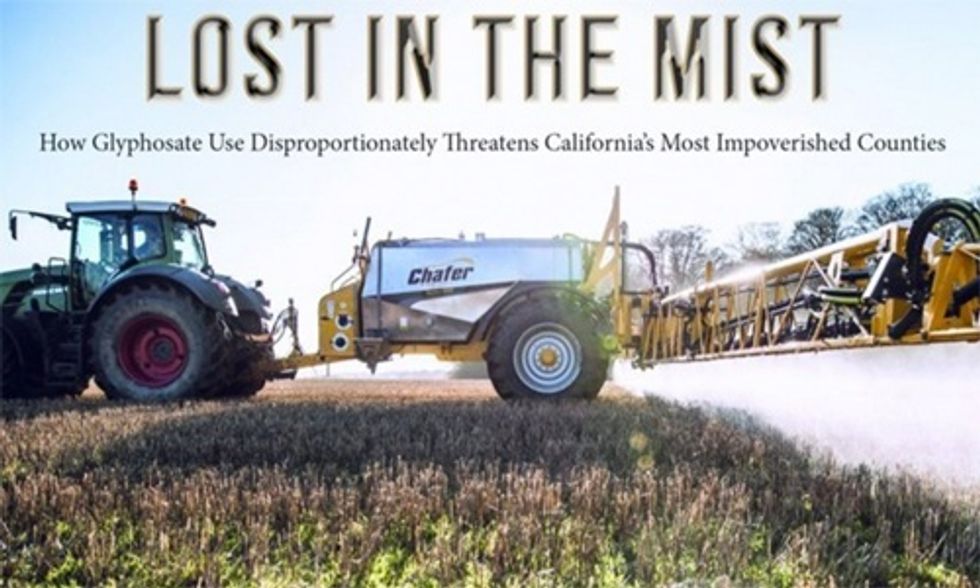 A new report finds that more than half of the glyphosate sprayed in California is applied in the state’s eight most impoverished counties. Monsanto's glyphosate, commonly known as Roundup, is classified as a probable carcinogen by the World Health Organization and may get a similar designation from the state of California in the coming weeks.

The analysis also finds that the populations in these counties are predominantly Hispanic or Latino, indicating that glyphosate use in California is distributed unequally along both socioeconomic and racial lines.

“We’ve uncovered a disturbing trend where poor and minority communities disproportionately live in regions where glyphosate is sprayed,” said Dr. Nathan Donley, a staff scientist with the Center for Biological Diversity. “In high doses glyphosate is dangerous to people, and California can’t, in good conscience, keep allowing these communities to pay the price for our over-reliance on pesticides."

The report, Lost in the Mist: How Glyphosate Use Disproportionately Threatens California’s Most Impoverished Counties, finds that 54 percent of glyphosate is applied in just eight counties, many of which are located in the southern part of the Central Valley. They are Tulare, Fresno, Merced, Del Norte, Madera, Lake, Imperial and Kern counties.

“The disproportionate concentration of glyphosate in our region is alarming and worrisome,” said Isabel Arrollo, executive director of El Quinto Sol de America, based in Tulare county. “It is imperative to protect the health of our communities, and any action to better protect health should not be dismissed as being premature. Health matters.”

Right now, California’s Environmental Protection Agency is deciding whether to formally add glyphosate to its list of known carcinogens under Proposition 65. Earlier this year the World Health Organization designated glyphosate as a probable human carcinogen.

“No one should be needlessly exposed to chemicals like glyphosate, that may cause cancer and other health problems,” said Caroline Cox, research director at the Center for Environmental Health. “It’s especially troubling that communities of color who are already at serious risk from chemicals in their environment are the most likely to suffer from exposures to this dangerous pesticide. The state must take the lead in protecting all Californians from glyphosate.”

This new report aligns with a recent study by the California EPA that found Hispanics and people in poverty disproportionately live in areas of high pesticide use. A 2014 California Department of Public Health study showed that Hispanic children were 46 percent more likely than white children to attend schools near hazardous pesticide use.

The California Department of Pesticide Regulation has an obligation to ensure that pesticide programs and policies do not result in a racially disparate impact. Title VI of the Civil Rights Act and California Government Code § 11135 prohibit such racial discrimination.

“Rural communities and communities of color bear an unfair burden from use of Monsanto's glyphosate,” said PAN Staff Scientist Emily Marquez, PhD. “Scientists around the globe have signaled that this is yet another concerning chemical in the toxic soup of pesticides that end up in the air, water and soil of communities on the frontlines of industrial agriculture. And it’s time for policymakers to respond.”

Glyphosate is the most widely used herbicide in the U.S. and in the world. In 2012, more than 280 million pounds of glyphosate were used in the U.S. agricultural sector. Its use increased more than 20-fold on just corn and soy, from 10 million pounds in 1990, largely due to the widespread adoption of crops genetically engineered to withstand what would otherwise be fatal doses of glyphosate. Accordingly, glyphosate or its metabolites are now found on 90 percent of soybean crops and in air, water and soil samples around agricultural regions.

“Industrial agriculture has found a way to modify our crops so that they can survive large doses of a probable carcinogen, but whether humans can adapt in the same way is doubtful,” said Sarah Aird, Californians for Pesticide Reform’s acting executive director.

Full or partial bans on glyphosate have been adopted by France, the Netherlands, Sri Lanka and Colombia.

“The overuse of glyphosate in California and across the country is of increasing concern, especially in light of the World Health Organization's recent conclusion that it is probably carcinogenic,” said Rebecca Spector, west coast director at Center for Food Safety. “In the short term, it is imperative that the state of California better protect vulnerable communities from exposure to this harmful chemical. In the long term, we need to shift our agricultural system away from chemically intense practices all together in order to safeguard human health and the environment.”