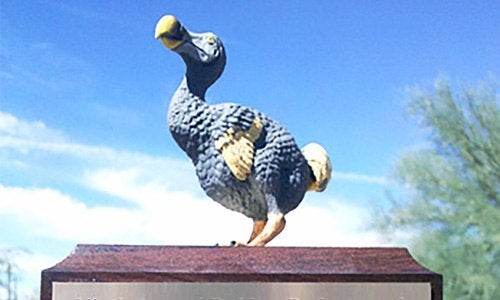 Monsanto, producer and seller of Roundup and its toxic active ingredient glyphosate, is the recipient of the Center for Biological Diversity’s 2015 Rubber Dodo Award, given annually to those who have done the most to destroy wild places, species and biological diversity. Glyphosate is now used in more than 160 countries, and more than one billion pounds are applied each year. It has been classified as a “probable human carcinogen” by the World Health Organization and its heavy use, particularly on herbicide-resistant GMO crops, also developed by Monsanto, is considered a leading cause of the recent, drastic 80 percent decline in monarch butterflies.

Posted by Center for Biological Diversity on Thursday, November 5, 2015

“The science is increasingly clear that glyphosate is damaging wildlife and putting people at serious risk, yet Monsanto continues to aggressively peddle the stuff to farmers and really any customer it can find,” said Kierán Suckling, the Center for Biological Diversity’s executive director. “It’s hard to fathom the depth of the damage that glyphosate is doing, but its toxic legacy will live on for generations, whether it’s through threatening monarchs with extinction or a heightened risk of cancer for people where it’s spread.”

Earlier this week the center released an analysis that found more than half of the glyphosate sprayed in California is applied in the state’s eight most impoverished counties, where the populations are predominantly Hispanic or Latino.

“Those sitting in Monsanto’s boardrooms and corporate offices won’t pay the price for this dangerous pesticide. It’s going to be people on the ground where it’s sprayed,” Suckling said. “This kind of callous pursuit of profits is at the core of what’s driving the loss of wildlife and diversity on a massive scale around the globe.”

Background on the Dodo

In 1598 Dutch sailors landing on the Indian Ocean island of Mauritius discovered a flightless, 3-foot-tall, extraordinarily friendly bird. Its original scientific name was Didus ineptus. (Contemporary scientists use the less defamatory Raphus cucullatus.) To the rest of the world, it’s the dodo—possibly the most famous extinct species on Earth after the dinosaurs. It evolved over millions of years with no natural predators and eventually lost the ability to fly, becoming a land-based consumer of fruits, nuts and berries. Having never known predators, it showed no fear of humans or the menagerie of animals accompanying them to Mauritius.

Its trusting nature led to its rapid extinction. By 1681 the dodo had vanished, hunted and outcompeted by humans, dogs, cats, rats, macaques and pigs. Humans logged its forest cover while pigs uprooted and ate much of the understory vegetation.

The dodo’s reputation as a foolish, ungainly bird derives in part from its friendly naiveté and the very plump captives that were taken on tour across Europe. The animal’s reputation was cemented with the 1865 publication of Lewis Carroll’s Alice’s Adventures in Wonderland.

Based on skeleton reconstructions and the discovery of early drawings, scientists now believe that the dodo was a much sleeker animal than commonly portrayed. The rotund European exhibitions were likely produced by overfeeding captive birds.