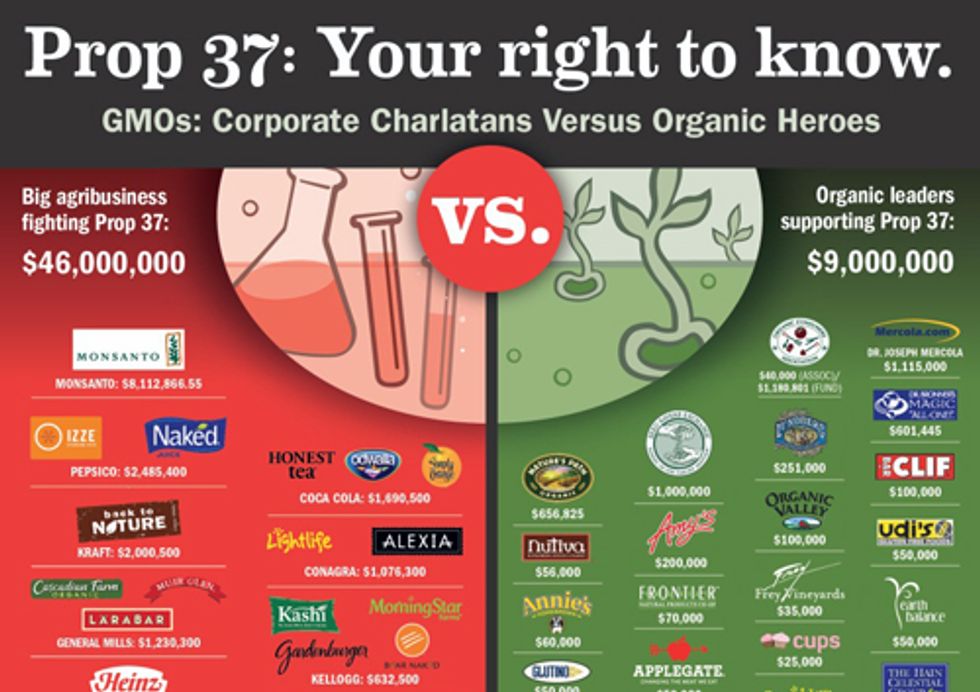 After a deluge of allegedly misleading advertisements paid for in large part by pesticide and biotechnology corporations, California voters defeated Proposition 37, which would have given them the right–to-know whether the foods they buy at the grocery store contain genetically engineered organisms. (GMOs).

With 95 percent of the vote counted, according to the California Secretary of State’s office, the proposal was defeated 53-47 percent.

“Genetically engineered foods found on market shelves have most commonly been altered in a lab to either be resistant to being sprayed by large amounts of toxic herbicides, or to produce, internally, their own insecticide,” explains Mark A. Kastel, Codirector of The Cornucopia Institute.

“Corporations that produce both the genetically engineered crops and their designer pesticides, in concert with the multi-billion-dollar food manufacturers that use these ingredients, fought this measure tooth and nail, throwing $46 million at the effort that would have required food manufacturers to include informational labeling on GMO content on their packaging,” Kastel added.

Many food activists nationwide looked to the California initiative as “the last best hope” for GMO labeling in this country. Such labeling is required throughout Europe, and by scores other countries worldwide. In the U.S., polls indicate that more than 90 percent of citizens support labeling and the right to choose if they have not been deluged by misleading advertisements paid for by biotechnology corporations. But both Republicans and Democrats in Washington have been unwilling to address the issue, likely due to massive campaign contributions from the biotechnology and agribusiness lobbies.

The failure of Proposition 37 does not leave consumers completely in the dark about genetically engineered (GE) foods, since foods without GE ingredients are already widely available and clearly carry the USDA “organic” seal. Federal law prohibits the use of GE seed or ingredients in any product labeled “organic.”

In some ways, the “organic” label goes much further than what Proposition 37 would have required, since organic meat, milk and eggs must come from animals that were not treated with GE hormones and fed a diet that is free of GE ingredients. Proposition 37 would not have required labels on meat, milk and eggs from animals given GMO feed. Alcoholic beverages were also not covered under proposition 37. Organically labeled beer, wine and spirits are increasingly available in the marketplace.

“Organic foods are already required by federal law to be free from genetic engineering,” says Steven Sprinkel, an organic farmer in Ojai, California who fought for prop 37 passage. “And the icing on the organic cake is that certified organic foods are also grown without a long list of dangerous and toxic chemicals and pesticides, hormones, antibiotics and other drugs that are routinely used in conventional agriculture.”

Despite its defeat, Proposition 37 achieved at least one of its goals. The question on the ballot, which forced biotechnology corporations and food manufacturers to defend their experimentation with our food supply and with public health, has likely increased awareness about GE foods among California consumers.

The biotechnology and food manufacturing industry’s efforts to defeat Proposition 37 revealed just how terrified these corporations were of consumers knowing what they are eating.

“If corporations truly believed that genetically engineering our food supply is in society’s best interest, they should be happy for consumers to know which foods contain their genetically engineered materials,” says Cornucopia’s Kastel. “Their obvious fear of people knowing what they’re eating raises serious questions about their products’ safety, and more and more consumers are making that connection.”

The campaign to label genetically engineered foods also shed light on the dedication to organic principles, or lack thereof, by the corporate ownership of many iconic organic brands. For weeks, organic consumers have flooded consumer relations phone lines and Facebook pages of organic and “natural” brands such as Horizon Organic (Dean Foods), Silk (Dean Foods), Kashi (Kellogg) and Cascadian Farm (General Mills) when they learned that the corporate owners of these brands were spending hundreds of thousands of dollars to defeat Proposition 37.

In what turned out to be a David and Goliath campaign fight, a diversified group of independent food manufacturers, retailers and activists that espouse their commitment to the principles of sustainable agriculture and to producing healthy, wholesome and pure food, stepped up to the plate by making contributions to the “Yes on 37” campaign.

Consumers can view a scorecard illustrating the financial contributions of various organic brands. “We hope this information will empower consumers to vote in the marketplace and support the true heroes in this industry,” Kastel added.

Meanwhile, some corporations that should have stepped up to the plate gave token contributions at the eleventh hour. Whole Foods, a corporation with net sales as high as Monsanto’s—both have approximately $11 billion in annual sales—contributed a mere $25,000, just two business days before the election, Cornucopia noted in its research. On the other hand, Monsanto contributed $8,113,000 to the “No on 37″ campaign effort.

“Had we seen the same level of enthusiasm for consumers’ right-to-know from Whole Foods as we saw against the right-to-know from Monsanto, the playing field would have been more level, and the misleading information spewed by giant corporate agribusinesses would quite possibly not have prevailed on election day,” said Kastel. “Meaningful participation from Whole Foods could have been a game changer.”

Cornucopia encourages organic consumers who shop at Whole Foods to continue doing so. Rather than boycott the multi-billion-dollar corporate food retailer, Cornucopia encourages Whole Foods shoppers to write corporation leadership, through their website, and share their discontent with the major retailer’s unwillingness to fully step up to the plate on financially supporting the “Yes on 37” campaign.

In its annual report for shareholders, Whole Foods writes, “We walk our talk when it comes to our core values.” Whole Foods shareholders should be concerned with the corporation’s lackluster participation in this “food fight of the decade,” when they passed up an opportunity to walk their talk and refused to step up to the plate in terms of financial support for this grassroots effort. “It will remain to be seen whether Whole Foods has squandered some of their goodwill,” Kastel lamented.

Many consumers who do feel betrayed might seek out one of the country’s almost 300 member-owned co-ops, or one of the iconic independent natural food grocers for purchases of organic, non-GMO food.