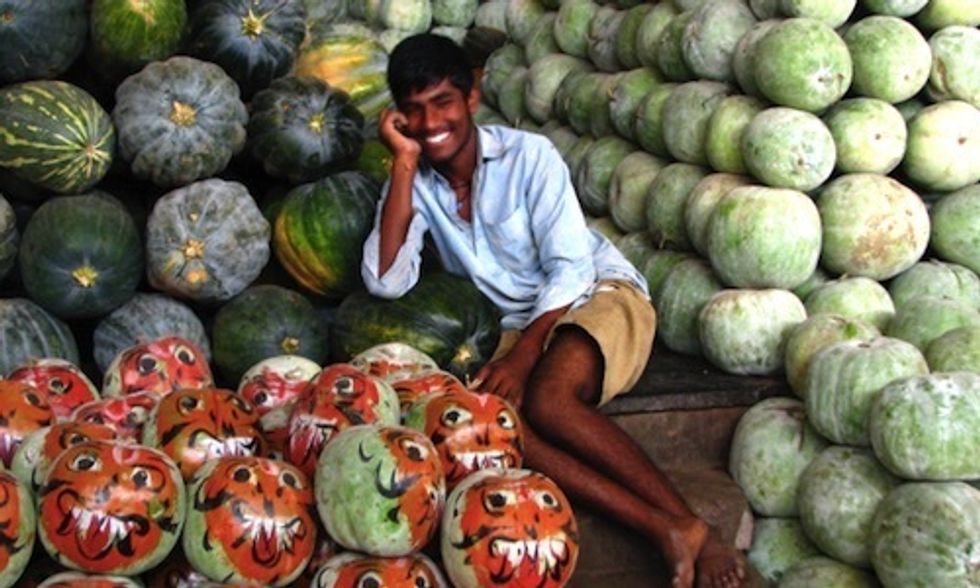 The European Patent Office has revoked a false patent on genetically modified (GMO) melons held by Monsanto, the world's largest seed company, after a Jan. 20 public hearing in Munich, Germany.

The Europe-based coalition No Patents on Seeds spearheaded the opposition. According to a press release from the organization, Monsanto claimed that melons with a natural resistance to plant viruses was its own invention even though the resistance was already detected in indigenous melon varieties in India.

Monsanto's melon patent was recently revoked by the European Patent Office for technical reasons. The case highlights the growing concern of agribusinesses and their role in patenting and commercializing living organisms, such as plants and seeds, from certain countries or territories. Pictured: a melon/pumpkin seller in Koyambedu Market. Photo credit:
Flickr

As the The Hindu explained:

Melons have a natural resistance to certain plant viruses. In the case of Cucurbit Yellow Stunting Disorder virus (CYSDV)—which has been spreading through North America, Europe and North Africa for several years—certain melons are known to be naturally resistant to it. Using conventional breeding methods, this type of resistance was introduced from an Indian melon to other melons and has now been patented as a Monsanto “invention.”

Opponents feared that by arming itself with this patent—"closterovirus-resistant melon plants," or EP1962578, issued May 2011—the St. Louis-based agribusiness "could block access to all breeding material inheriting the virus resistance derived from the Indian melon," The Hindu reported.

No Patents on Seeds argued that Monsanto's patent was awarded to the company even though European patent law does not allow patents on plant varieties and processes for conventional breeding.

“The patent was based on essentially biological processes for breeding and claimed plant varieties. This was a clear violation of European patent law,” said No Patents on Seeds coordinator Christoph Then in a statement.

He added that revocation of the patent was “a huge success,” however, “politicians need to make sure that laws are applied properly and prohibitions are no longer ignored.”

Not only that, the melon's natural resistance to closterovirus has already been catalogued for several decades before Monsanto stepped in. As FruitNet.com observed: "The gene responsible for this resistance was first found in a melon plant in India catalogued in 1961, the [European Patent Office] conceded, and plant containing that gene have been publicly available since 1966."

According to the European Patent Office, the "melon patent" case kickstarted in February 2012 after the agency received two notices of opposition from two different groups:

One of them was from Nunhems, the vegetable seed-producing subsidiary of Bayer CropScience, who objected to the patent on technical grounds, including lack of novelty and inventiveness of the patented plants. The other was from a coalition of NGOs and private persons, who, in addition to technical arguments, voiced their concerns over the use of conventional breeding methods.

This case was stayed ex officio, however, until the European Patent Office's highest judicial instance, the Enlarged Board of Appeal had ruled on a landmark case, known as "broccoli and tomato II," as the decision on the melon patent opposition depended entirely on the outcome. In March 2015 the Enlarged Board issued its decisions (G2/12 and G2/13) on “broccoli and tomato II” (ruling that the products of essentially biological processes (i.e. plants or fruits) are not excluded from patentability even if they are obtained from such a non-patentable method. Consequently, the EPO has resumed work on the cases that had been stayed.

The melon patent decision can now be challenged by Monsanto.

The coalition also claimed that Monsanto's melon patent constituted an act of "biopiracy" by violating Indian law and international treaties, adding that the Indian government supported the opposition and sent a letter requesting the patent to be revoked. Biopiracy is the highly unethical practice of commercializing biological materials such as plants from certain countries or territories without compensation.

“Monsanto’s melon Patent is biopiracy at its most devious. First of all, the patented resistance was not invented by Monsanto—just discovered in an Indian melon. Monsanto is now pretending to be the first to have bred it into other melons—but to copy something is not an invention,” Berne Declaration campaign coordinator Francois Meienberg said in a statement.

“Secondly, Monsanto has violated the Indian Biodiversity Act implementing rules on Access and Benefit-Sharing based on the Convention on Biological Diversity," Meienberg continued. "It would be a disgrace if the European Patent Office rewards Monsanto with a patent based on a flagrant violation of Indian law.”

“We believe that plants and seeds are not human inventions and therefore, not patentable. This patent is based on biopiracy since it patents traits taken from indigenous melon varieties from India,” Shiva told The Hindu.

It so happens that the melon patent is "one of several patents granted on plants and animals derived from conventional breeding by the European Patent Office," No Patents on Seeds said.

The European Patent Office says that the number of patent applications it receives for conventionally bred plants is around 70 applications per year, and seven patents have been granted since 1995.

According to research from No Patents on Seeds, approximately 100 new patent applications from agribusinesses such as Bayer, Dupont/Pioneer, Monsanto, Syngenta and Dow AgroSciences were filed in just 2015 alone. These patents are for carrots, potatoes, brassica plants, maize, melons, pepper, rice, lettuce, soybeans, spinach, tomatoes, wheat and onions.