Monsanto Ordered to Pay $46.5 Million in PCB Lawsuit in Rare Win for Plaintiffs 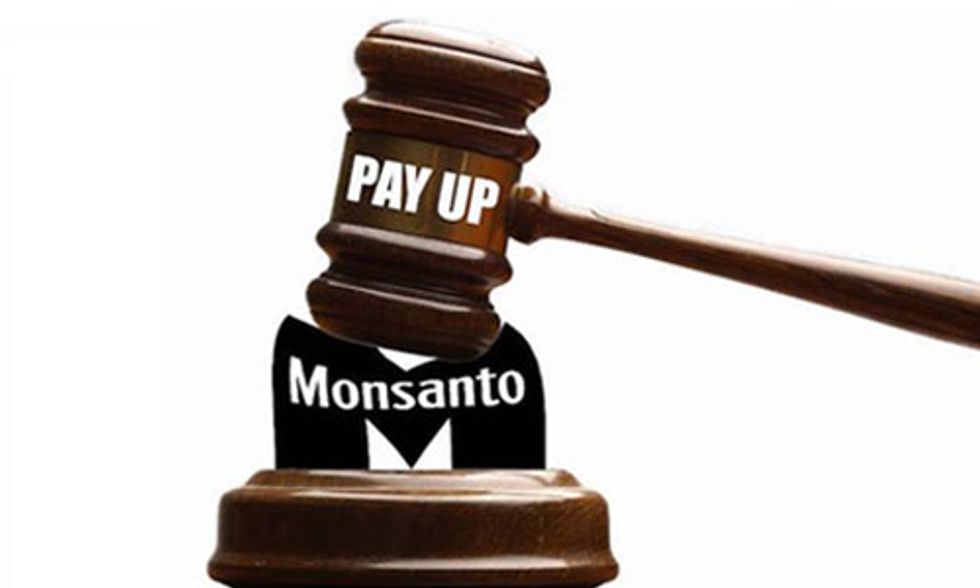 A St. Louis jury has awarded three plaintiffs a total of $46.5 million in damages in a lawsuit alleging that Monsanto and three other companies were negligent in its handling of polychlorinated biphenyls, or PCBs, a highly toxic and carcinogenic group of chemicals.

PCBs were used to insulate electronics decades ago. Before switching operations to agriculture, Monsanto was the sole manufacturer of the compound from 1935 until 1977. The U.S. Environmental Protection Agency (EPA) banned PCBs in 1979, due to its link to birth defects and cancer in laboratory animals. PCBs can also have adverse skin and liver effects in humans. PCBs linger in the environment for many decades.

The lawsuit claims that Monsanto continued to sell the compounds even after it learned about its dangers and falsely told the public they were safe. Indeed, internal documents have surfaced showing that Monsanto knew about the health risks of PCBs long before they were banned. A document, dated Sept. 20, 1955, stated: “We know Aroclors [PCBs] are toxic but the actual limit has not been precisely defined."

The verdict is the first such victory in the city of St. Louis and a seemingly rare win overall. Monsanto has historically prevailed in similar lawsuits filed against the company over deaths and illnesses related to PCBs, as MintPress News noted.

"This is the future," plaintiffs' lawyer Steven Kherkher of Houston told EcoWatch.

"The only reason why this victory is rare is because no one has had the money to fight Monsanto," explaining that his law firm, Williams Kherkher, and other law firms pooled their resources to get the case off the ground.

"It's not going to be rare anymore," he said as his law firm has accumulated about 1,000 plaintiffs surrounding PCBs.

As more cases mount against the company, Kherkher said, “every judge allows us to acquire more and more information from Monsanto and discover their documents. There is a lot more information out there that has yet to be mined."

Monsanto has issued a statement following the verdict, saying they are planning to appeal:

We have deep sympathy for the plaintiffs but we are disappointed by the jury's decision and plan to immediately appeal today's ruling. Previous juries in four straight similar trials rejected similar claims by attorneys that those plaintiffs contracted non-Hodgkin lymphoma as a result of eating food containing PCBs. The evidence simply does not support today's verdict, including the fact that scientists say more than 90 percent of non-Hodgkin lymphoma cases have no known cause.

"The man from Oklahoma died at the age of 58 and had no health problems at all," Kherkher said. "He wasn't a smoker or a drinker and he exercised, but his body was filled with Monsanto's PCBs. He grew up in Michigan and Monsanto polluted the waters of Michigan and he suffered and died."

“A lot people just don't know that Monsanto's PCBs are in the orange juice you drank this morning and the pizza you'll eat tonight. The air that you're breathing has PCBs in it," Kherkher said. “Monsanto has discounted it, saying it's only parts per billion or parts per trillion, but it adds up."

He also disputes Monsanto's claim that most non-Hodgkin lymphoma cases have no known cause, citing a 2013 decision from the International Agency for Research on Cancer classifying PCBs as carcinogenic to humans. The agency found limited evidence from some studies suggesting that exposure is linked to increased risks of non-Hodgkin lymphoma and breast cancer.

Juror Nathan Nevius told the St. Louis Dispatch after the ruling, “All of us could pretty much agree that Monsanto was negligent."

Another juror, Ashley Enochs said, “I think it goes to show that large companies can put stuff out there that's harmful and they can do it for along time but that justice is going to be served whether it's a year after the products are put out, or in this case, 80 years."

As far as the environmental footprint of PCBs, ThinkProgress explained that the sheer number of lawsuits that have surfaced across the country in the last three decades against Monsanto over the chemical proves how difficult it is to hold a polluter accountable.

Still, a growing number of West Coast cities have slammed lawsuits against the St. Louis-based corporation for cleanup costs of the compound. On May 19, the city of Long Beach in California became the eighth city to sue the biotech giant, joining Portland, Seattle, Spokane, Berkeley, San Diego, San Jose and Oakland. These cases are pending.

According to Courthouse News Service, Long Beach says in its federal lawsuit that Monsanto knew for decades that PCBs are "widely contaminating all natural resources and living organisms" including marine life, plants, animals, birds and humans."

The complaint further states: "PCBs regularly leach, leak, off-gas, and escape their intended applications, causing runoff during naturally occurring storm and rain events, after being released into the environment. The runoff originates from multiple sources and industries and enters Long Beach Waters with stormwater and other runoff."

Long Beach says it has "incurred substantial costs" cleaning up the chemicals and is seeking compensatory and punitive damages for public nuisance and costs of suit.

In response, Scott Partridge, Monsanto's vice president of global strategy, said that the city's lawsuit was "instigated by trial lawyers who have been aggressively shopping their services to local government officials," Courthouse News Service reported.

"The speculative legal theories being advanced have no basis in the law, and should ultimately be rejected by the courts in California," he continued. "The facts are clear: There's no evidence that Monsanto discharged a single PCB molecule into the waters of Long Beach, as Monsanto never had a PCB manufacturing facility in Long Beach or anywhere else in California. Any PCBs that may exist were introduced by unidentified third parties or by the city itself.

"Monsanto takes seriously its own environmental responsibilities. But in this case, there is no valid claim against Monsanto. If the city wants to deal with these PCBs, it should seek out those who allowed PCBs into the Long Beach water."

Monsanto company could gain further legal protection after Congressional Republicans snuck in the so-called "Monsanto Rider" in the Toxic Substances Control Act reauthorization bill that will give the chemical giant permanent immunity from liability for injuries caused by PCBs, the New York Times reported in February.