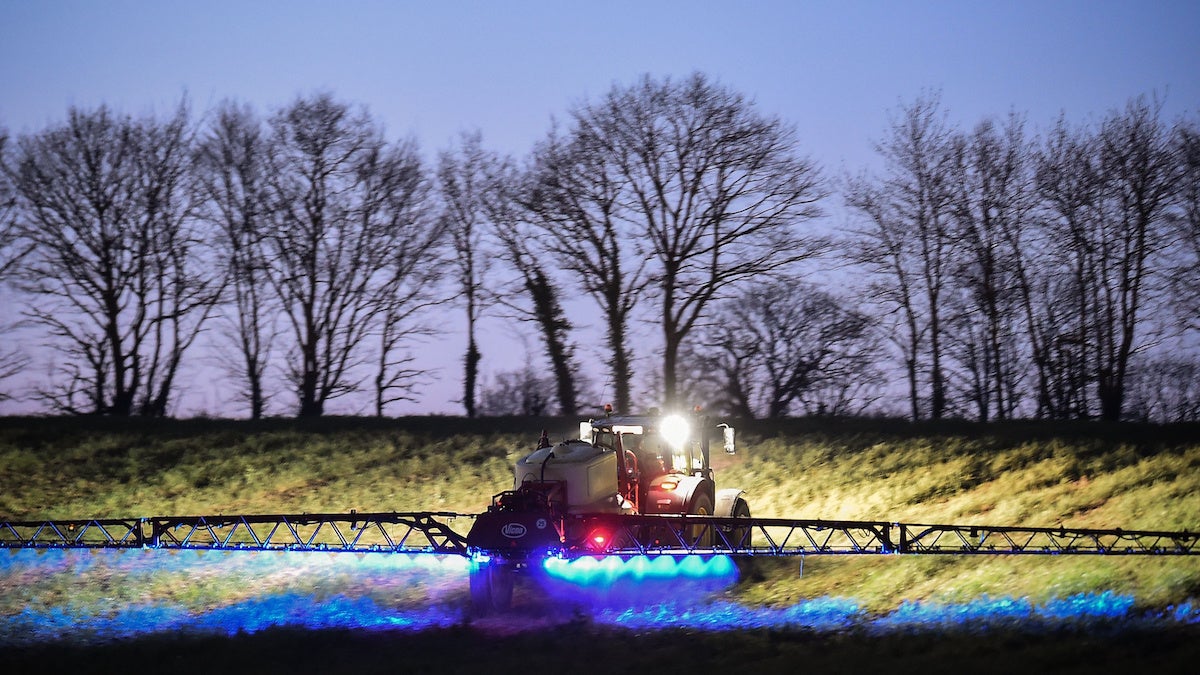 A French farmer sprays glyphosate herbicide on a cornfield on March 21, 2019 in Saint-Leonard-des-Bois, northwestern France. JEAN-FRANCOIS MONIER/AFP via Getty Images

A new investigation revealed that Monsanto funneled money to secretly fund academic studies that warned of catastrophic consequences to farmers if glyphosate was banned in the UK, according to research from the German watchdog LobbyControl, as The Guardian reported.

The two studies in question come from 2010 and 2014, which was before the German chemical and pharmaceutical giant Bayer bought Monsanto in 2018. Upon learning of the secret funding, Bayer said the failure to disclose it violated the company’s principles, according to The Guardian.

“This is an unacceptable form of opaque lobbying,” said Ulrich Müller at LobbyControl, as The Guardian reported. “Citizens, media and decision-makers should know who pays for studies on subjects of public interest. The studies also used very high figures for the benefits of glyphosate and for possible losses in case of a ban. These extreme figures were then used to spin the debate.”

However, the authors of the two studies said that the funding did not influence their findings. The 2010 study, called How Valuable is Glyphosate to UK Agriculture and the Environment? touted glyphosate for “a wide range of benefits to users.” It said that glyphosate binds to soil and rarely leaches into groundwater. It does mention that glyphosate is sometimes found in surface water, but far below levels that would register as toxic. It then goes on to discuss how a ban of glyphosate would upend UK farming and gardening.

The 2014 study followed a similar line of reasoning. The study, titled Glyphosate Use on Combinable Crops in Europe: Implications for Agriculture and the Environment, also mentioned that glyphosate is highly water soluble and does not readily leach into soil or water and is found in less than 1 percent of water samples. It then goes on to assess “the value of glyphosate use across wheat, winter barley and oilseed rape in Europe.”

And yet, one of the lead researchers Sarah Wynn said the funding did not influence her research. She told The Guardian, “As with other companies in our field, it is entirely normal for external organizations to fund research studies. However, it has always been our core principle that our research is never influenced in any way by those that fund us.”

Wynn and her colleagues, unsurprisingly, came down in favor of continued glyphosate use. The research concluded, “the loss of glyphosate would cause very severe impacts on UK agriculture and the environment,” as The Guardian reported. In the 2014 study they concluded that Europe would see a 20 percent fall in wheat and rapeseed production if glyphosate were banned.

Other researchers came to a different conclusion, noting that farming practices would change. The Andersons Centre at Oxford Economics challenged the conclusion of the Monsanto-funded studies.

In its report on a glyphosate ban in the UK, it said, “The Andersons Centre believe that this may be rather high given the mitigation efforts and the rotational changes discussed elsewhere. A similar process has been undertaken for all the major crops grown in the UK, using the best available data and knowledge of industry experts.”

The National Farmers Union was not alone in using the research. Industry lobbyings groups the Glyphosate Task Force (now renamed the Glyphosate Renewal Group), also used the research, as did the Crop Protection Association, according to The Guardian.