The Bad News for Monsanto Keeps Getting Worse 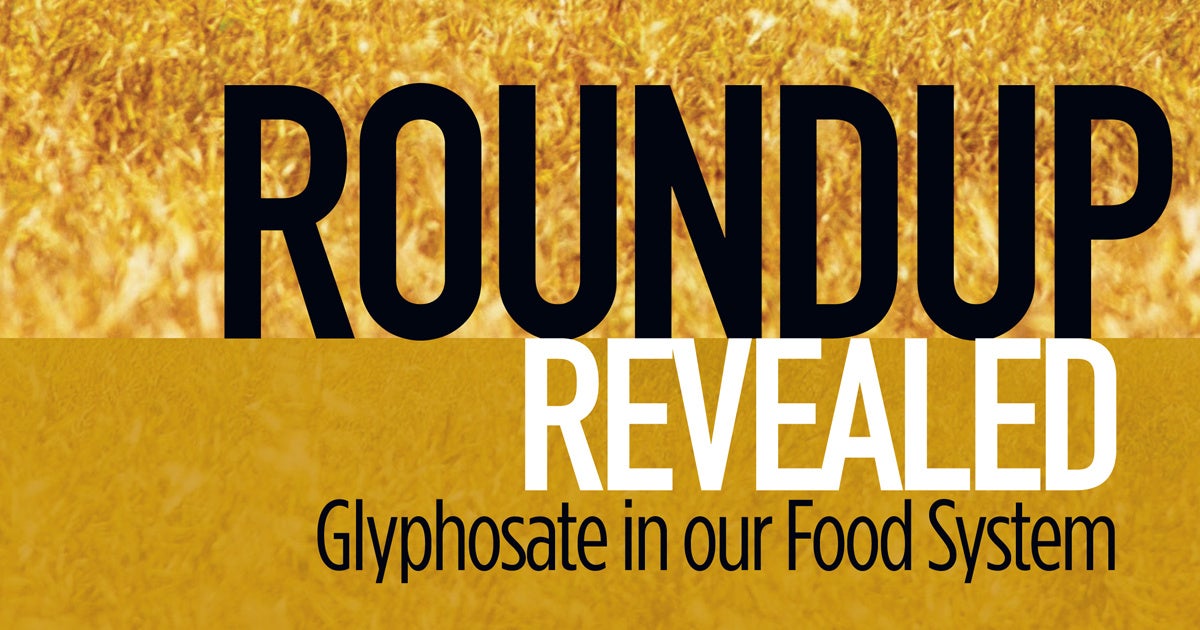 The bad news for Monsanto keeps getting worse. In newly published internal Monsanto emails, a company scientist writes that “You cannot say that Roundup is not a carcinogen … we have not done the necessary testing on the formulation to make that statement.”

This news is huge because Monsanto has always focused on maintaining that glyphosate is safe for humans and the environment. In addition to concerns about glyphosate, the active ingredient in Monsanto’s Roundup, research suggests that the other trade secret ingredients amplify the toxic effects of Roundup—and now the emails suggest that Monsanto doesn’t think they can counter that argument at all.

Glyphosate is the most heavily used pesticide in human history—and it accounts for the majority of Monsanto’s profits. It is time that the truth about glyphosate comes out.

As You Sow has been following glyphosate’s trail for quite a while. With the use of glyphosate skyrocketing and its persistence in water and soil, these new revelations are extremely concerning. The U.S. Environmental Protection Agency has clearly not done its due diligence in assessing Roundup’s toxicity, and we may be paying a terrible price for it.

As You Sow has provided a detailed analysis of these issues in its new report, RoundUp Revealed: Glyphosate in Our Food System.

Our bottom line is that pesticide-intensive agriculture is unnecessary. Investors need to engage with companies to address the rise of glyphosate and other toxic pesticides in the food system.

Here are the key findings from our report:

Genetically engineered crops are the largest driver of glyphosate sales. Although GE crops were promised to decrease pesticide use and provide a multitude of other benefits, the vast majority of GE crops grown in the U.S. are engineered to tolerate direct applications of glyphosate or to produce Bt insecticide.

Pre-harvest use of glyphosate significantly increases residues of glyphosate in food. This growing practice increases public health risks, provides farmers with marginal benefit, and has been banned by Germany and Austria. We estimate that 28% of U.S. wheat was treated with glyphosate in 2015, and much of this use may be pre-harvest. As You Sow is working with leading food companies to investigate this practice. For instance, Kellogg Company has agreed to investigate pre-harvest glyphosate use in its supply chain.

The World Health Organization’s (WHO) International Agency for Research on Cancer (IARC), classified glyphosate as a probable human carcinogen in 2015. Research also suggests that glyphosate may have other health impacts including disruption of the endocrine system and other biological processes. These impacts can be amplified by the “inert” ingredients in Roundup and other herbicide products. Independent scientists recommend a limit on glyphosate exposure at least 17 times lower than current U.S. regulation.

Glyphosate is present throughout the food system and our environment. A recent biomonitoring study by UCSF identified glyphosate in 93% of individuals tested and in 60% of surface water in the Midwest. The herbicide has been found to persist in water and soil up to a year in some conditions.

The U.S. Environmental Protection Agency (EPA) maintains that glyphosate is “unlikely to be carcinogenic;” criticism of the EPA’s methods and integrity is growing. In making its determination that glyphosate is unlikely to be carcinogenic, the EPA did not consider the vast majority of academic science and failed to follow its own guidelines, according to its advisory panel. Recently unsealed emails raise concerns about conflicts of interest within the highest levels of the EPA’s Office of Pesticide Programs.

As use of glyphosate has skyrocketed, weeds have developed resistance, with half of U.S. farms reporting glyphosate-resistant “superweeds.” The response of the highly consolidated seed and pesticide industry has been the introduction of new GE crops that are engineered to be used with glyphosate as well as 2,4-D and dicamba. These herbicides are known to be more toxic and volatile than glyphosate. Monsanto, the firm that sells half of the world’s glyphosate, is strategically focused on continuing to sell GE crops that are to be used with herbicides. Now, the company is merging with Bayer, another major seed and pesticide company, which will further decrease competitiveness in the industry and provide greater synergy with the companies’ pesticide sales.

Pesticide-intensive agriculture has been shown to be unnecessary. United Nations food and pollution experts’ 2017 report to the UN Human Rights Council reiterates that pesticides are not necessary to feed the world, warns of catastrophic consequences if current pesticide-intensive farming practices continue, and criticizes pesticide manufacturers for “systematic denial of harms” and “unethical marketing tactics.”

We recommend that investors engage with companies in the food, retail, and restaurant sectors to address the growing risks of glyphosate and other toxic pesticides in the food system. Food companies should mandate reduced use of glyphosate in their supply chains, especially pre-harvest use, and focus on increasing preventive measures such as clear and binding weed resistance prevention plans.

Austin Wilson oversees the Environmental Health Program at As You Sow.