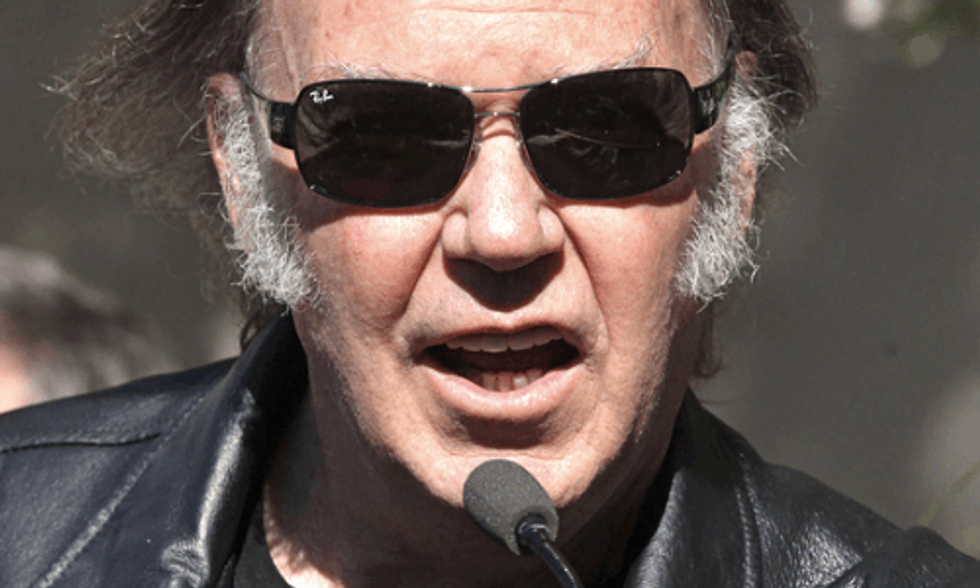 After delivering some bad news to presidential candidate Donald Trump to stop rockin' to his Freedom song, looks like Neil Young has also upset some of his fans over at Monsanto.

In a statement to Billboard, Monsanto is letting it be known that its feelings have been hurt by the rock legend.

"Many of us at Monsanto have been and are fans of Neil Young," the company said. "Unfortunately, for some of us, his current album may fail to reflect our strong beliefs in what we do every day to help make agriculture more sustainable. We recognize there is a lot of misinformation about who we are and what we do—and unfortunately several of those myths seem to be captured in these lyrics."

As we previously reported, the 69-year-old musician is releasing a new album on June 29 called The Monsanto Years targeting the chemical giant's use of genetically modified seeds and pesticides.

Young sings on the title track: "The farmer knows he's got to grow what he can sell, Monsanto, Monsanto / So he signs a deal for GMOs that makes life hell with Monsanto, Monsanto / Every year he buys the patented seeds / Poison-ready they're what the corporation needs, Monsanto." Take a listen below.

Young's album also takes aim at other large corporations such as Starbucks, Chevron and Walmart. These companies have also released statements to Billboard.

Starbucks told the publication that it "has not taken a position on the issue of GMO [genetically modified organism] labeling," adding, "As a company with stores and a product presence in every state, we prefer a national solution."

Walmart, in response to Young's song about the retailer's notoriously low wages, hit back saying, "As you might have seen recently, Walmart raised its lowest starting wage to $9 an hour. We’re proud of the opportunity we provide people to build a career and have a chance at a better life."

Chevron, on the other hand, acknowledged Billboard's media inquiry but flat out said it wasn't going to participate in an interview.

The Canadian rocker has already issued a response to the statements. In a long message to his fans, the "Rockin' in the Free World" singer once again spoke out against Trump (who "likes Neil very much") for playing the song during his presidential candidacy announcement this week, and also how corporate interests have "hijacked" democracy.

He wrote, "When I speak out on corporations hurting the common man or the environment or other species, I expect a well-financed disinformation campaign to be aimed my way. Such is the case with the reaction to my new album The Monsanto Years, which covers many of these issues."

This note's for you... https://t.co/LvkEenGQiU

Read his full statement below:

Yesterday my song "Rockin' in the Free World" was used in a announcement for a U.S. presidential candidate without my permission.

A picture of me with this candidate was also circulated in conjunction with this announcement but It was a photograph taken during a meeting when I was trying to raise funds for Pono, my online high resolution music service.

Music is a universal language. So I am glad that so many people with varying beliefs get enjoyment from my music, even if they don't share my beliefs.

But had I been asked to allow my music to be used for a candidate—I would have said no.

I am Canadian and I don't vote in the United States, but more importantly I don't like the current political system in the USA and some other countries. Increasingly Democracy has been hijacked by corporate interests. The money needed to run for office, the money spent on lobbying by special interests, the ever increasing economic disparity and the well funded legislative decisions all favor corporate interests over the people's.

The Citizens United Supreme Court ruling is proof of this corruption as well as are the proposed trade deals which would further compromise our rights.

These Corporations were originally created to serve us but if we don't appropriately prioritize they will destroy us. Corporations don't have children. They don't have feelings or soul. They don't depend on uncontaminated water, clean air or healthy food to survive. They are beholden to one thing—the bottom line.

I choose to speak Truth to this Economic Power. When I speak out on corporations hurting the common man or the environment or other species, I expect a well financed disinformation campaign to be aimed my way.

Such is the case with the reaction to my new album The Monsanto Years, which covers many of these issues. I support those bringing these issues to light and those who fight for their rights like Freedom of Choice.

But Freedom of Choice is meaningless without knowledge.

Thats why its crucial we all get engaged and get informed.

That's why GMO labeling matters. Mothers need to know what they are feeding their children. They need freedom to make educated choices at the market. When the people have voted for labeling, as they have in Vermont, they need our support when they are fighting these corporate interests trying to reverse the laws they have voted for and passed in the democratic process.

I do not trust self serving misinformation coming from corporations and their media trolls. I do not trust politicians who are taking millions from those corporations either. I trust people. So I make my music for people not for candidates.

Keep on Rockin' in the Free World.