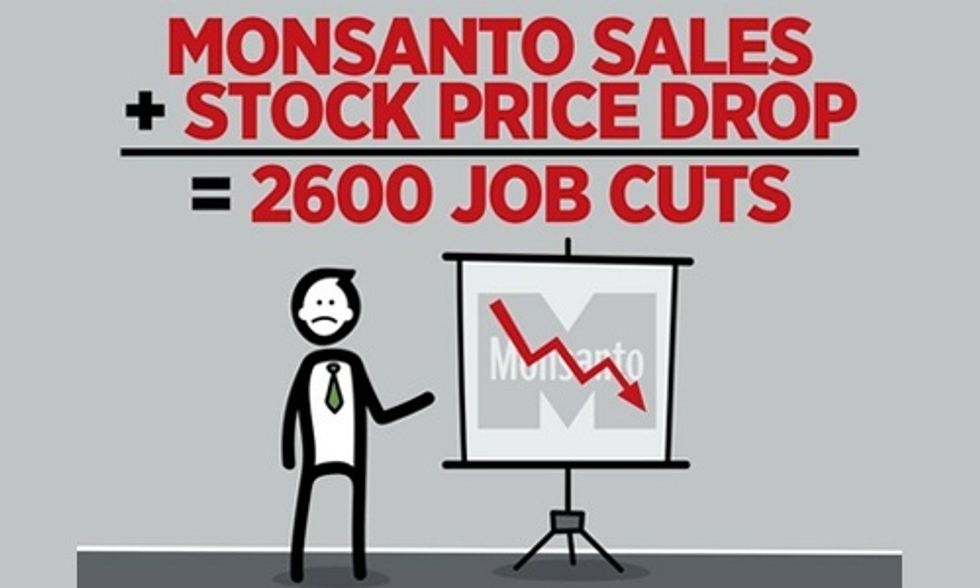 [Update: On Oct. 9, EcoWatch was provided documentation regarding the Judi Fitzgerald vs. Monsanto Company lawsuit filed in New York. The documentation dated Oct. 6, says, "Pursuant to Federal Rule of Civil Procedure 4l(a)(l)(A)(i), Plaintiff Judi Fitzgerald, by and through her undersigned counsel, hereby gives notice that the above-action against Defendant Monsanto Company is voluntarily dismissed without prejudice."

Update: On Oct. 15, EcoWatch contacted Weitz & Luxenberg, the law firm representing Judi Fitzgerald. Robin Greenwald, the head of the firm's environmental law unit, said that the case was refiled in Delaware: “For clarification, we added Ms. Fitzgerald to a complaint we filed in Delaware. So we dismissed the suit in New York and refiled in Delaware state court, closer to her home and where Monsanto is incorporated.”]

Monsanto is on the defensive after the agricultural giant was sued by two U.S. farm workers who claim that glyphosate—the primary ingredient in Monsanto's weedkiller, Roundup—caused their cancers.

“We believe that glyphosate is safe for human health when used as labeled,” Monsanto's spokesperson Charla Lord told Bloomberg via email.

Lord also said that while Monsanto is sympathetic to individuals experiencing health problems, she added that the latest lawsuits brought against the company are “without merit.”

The first suit was filed in Los Angeles late last month by 58-year-old former field worker Enrique Rubio, who was diagnosed with bone cancer in 1995. He believes his exposure to Roundup and other pesticides led to his diagnosis. That same day, 64-year-old assistant horticulturalist Judi Fitzgerald filed suit in New York City, making similar claims. Fitzgerald was diagnosed with leukemia in 2012.

The plaintiffs also accuse Monsanto of falsifying data and leading a "prolonged campaign of misinformation" to sway the public, farm workers and government agencies about the safety of the herbicide.

These lawsuits come six months after the International Agency for Research on Cancer (IARC), the cancer arm of the World Health Organization, reported that glyphosate was "probably carcinogenic to humans."

The plaintiffs are heavily relying on these findings in their cases. The IARC report “confirms what has been believed for years: that glyphosate is toxic to humans,” Bloomberg reported.

Monsanto has demanded a retraction of the WHO report and will "vigorously" defend itself against the lawsuits.

“Decades of experience within agriculture and regulatory reviews using the most extensive worldwide human health databases ever compiled on an agricultural product contradict the claims in the suit which will be vigorously defended,” Lord said.

The plaintiffs also cite Roundup bans in the Netherlands, France, Bermuda and other countries in their case, Bloomberg pointed out.

Fitzgerald and Rubio are both represented by Weitz & Luxenberg, a prominent New York City-based plaintiffs' law firm which specializes in asbestos disease, environmental pollutants, and dangerous drugs and medical devices.

The same firm happens to be representing the town and school districts of Westport, Massachusetts that filed suit against Monsanto last year to recover the costs of removing polychlorinated biphenyls (PCBs) from their schools.

Meanwhile, the world's largest seed company has seen slumping profits and announced Wednesday it will cut 2,600 jobs, or 12 percent of its 22,500-employee workforce, over the next two years.

The move was a "part of a cost-saving plan designed to deal with falling sales of its biotech seeds and herbicides, which pushed its quarterly losses deeper into the red," the Associated Press reported.

It's no secret that the multinational biotech and agricultural firm has had a rough year. Last month, California’s Environmental Protection Agency issued plans to list glyphosate as known to cause cancer. Additionally, an appeals court in Lyon, France upheld a 2012 ruling against Monsanto, in which the company was found guilty of the chemical poisoning of a farmer named Paul François. Most of the European Union has also decided to "opt out" of growing the company's genetically modified maize.