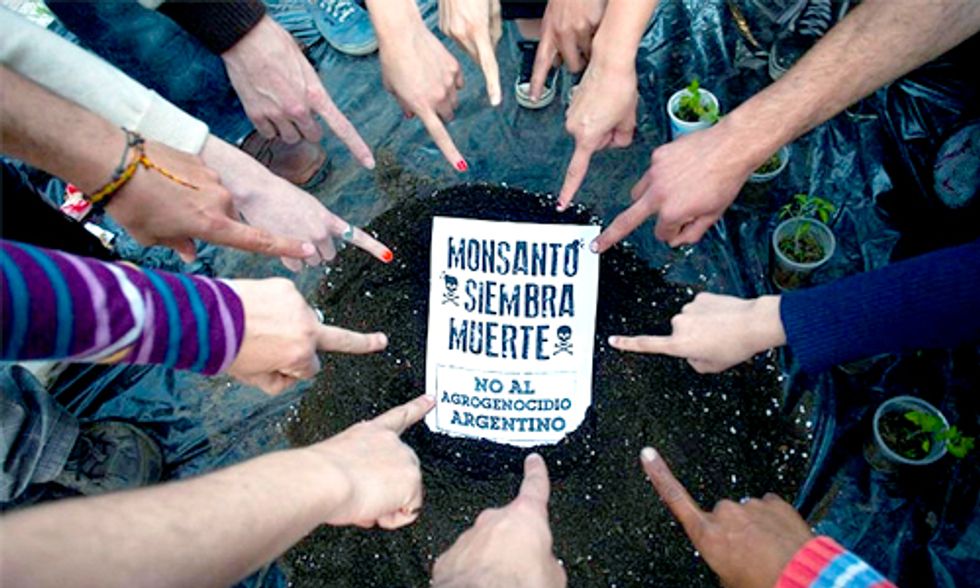 Although 94 percent of U.S. soybean crops come from genetically modified seeds, Monsanto's latest offering isn't meeting with the approval of grain traders in the U.S. Called “Roundup Ready 2 Xtend," the Wall Street Journal reported on May 2 that major grain corporations like Archer Daniels Midland Co. and Cargill Inc. are rejecting the soybean because it lacks important regulatory approval in the European Union and could disrupt international trade.

“The grain companies' stance is a potential blow to a product that Monsanto has touted as a blockbuster for U.S. farm fields," wrote Jacob Bunge.

Trade groups for the grain companies attacked Monsanto for attempting to sell the seeds without obtaining EU approval first. “Monsanto's actions with respect to RR2X soybeans are an unacceptable and very troubling development and we urge that it not be repeated," the groups wrote in a letter quoted by the Journal.

According to the Journal:

Soybean planting began early this month and farmers could be out of luck if Monsanto is unable to obtain the necessary approvals before the fall harvest.

The setback in U.S. markets comes as Monsanto continues its years-long battle to collect royalties in Argentina, where farmers frequently plant seeds harvested from previous crops rather than pay for new seeds each year.

Although the former method represents an ancient agricultural tradition, Monsanto's lawyers argue that international law enables its representatives to collect payments from any farm where genetic testing found crops containing the company's patented genes from its Intacta brand soybean.

Bloomberg reported on Saturday that the corporation “was expecting to collect royalties for about 15 percent of this season's Argentine soybean crop, which is forecast by the Buenos Aires Grains Exchange to be 56 million metric tons."

But the Argentine government would have to first approve the Intacta patent, a process which they now claim could take months. Argentina's science and technology minister, Lino Baranao, told Bloomberg:

“The Monsanto issue is very distinctive as Argentina still hasn't granted the company a patent for Intacta … A final decision must emerge soon, but I am not sure this will happen for the 2015-16 crop. We have asked the Institute for Property Rights to speed up the process, but it may take months."

The government also declined to use Monsanto's genetic testing labs, insisting on instead using labs approved by the Agriculture Ministry.

It's the latest round of maneuvering between the government and the agribusiness giant since Argentina requested in April that Monsanto waive its royalty requirements.

“Monsanto rejected that waiver without comment, but agreed to cut the royalties from the equivalent of fifteen dollars per hectare to some nine dollars per hectare, for growers who use Monsanto technology but who do not purchase seeds directly from the corporation," Sputnik News reported.