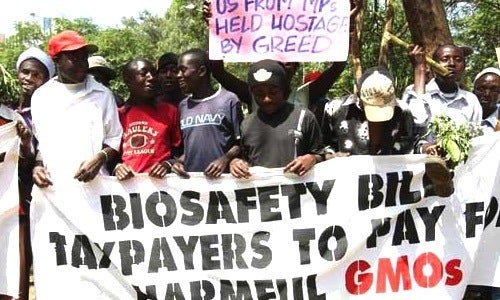 Kenya is on the verge of reversing its ban on genetically modified organisms (GMOs). The East African country—which has banned the import and planting of GMOs since 2012 due to health concerns—may soon allow the cultivation of GMO maize and cotton after being pushed for approval by pro-GMO organizations including Monsanto, the agribusiness giant and world’s largest seed company.

If it does so, Kenya will become only the fourth African country to allow the cultivation of GMO crops following South Africa, Bukina Faso and Sudan.

According to Mail & Guardian Africa, Kenya’s possible GMO reversal comes after the country’s National Biosafety Authority received one application from the Kenya Agricultural and Livestock Research Organization and the African Agricultural Technology Foundation to release Bt maize, and another application from Monsanto’s Kenyan subsidiary to release Bt cotton. Bt crops have been bioengineered with the moth- and butterfly-killing bacterium Bacillus thuringiensis.

On Nov. 21, 2012, the Kenyan Ministry of Public Health ordered public health officials to remove all GMO foods on the market and to enforce a ban on GMO imports. The Minister for Public Health, Beth Mugo, presented the concerns about the safety of GMOs during a Kenyan cabinet meeting, citing a (since retracted) French study that linked cancer in rats to the consumption of GMO foods.

The National Biosafety Authority is expected to make its decision on the maize seed Jan. 31 and then on Feb. 28 for the cotton seed, according to Tonui.

Scientists from the Kenya Agriculture and Livestock Research Organization and African Agricultural Technology Foundation want the maize seeds released to farmers for mass production. As Bloomberg described, maize (or corn) is a major dietary staple in Kenya and would benefit from pest-resistant crops:

“Kenya is Africa’s largest per-capita corn consumer and the second-biggest seeds market, according to Bloomberg Intelligence. Annual corn consumption is estimated at 103 kilograms (227 pounds) per person, according to the Food and Agriculture Organization [FAO]. In 2011, Kenya became the first African nation to report an outbreak of the Maize Lethal Necrosis Disease, which can wipe out farmers’ entire crops, the FAO says on its website.”

Still, the looming approval of GMOs in Kenya has been met with heavy protests by opponents. In September 2015, activists rallied in Nairobi against the lifting of the GMO ban, citing health concerns.

“We need to stand by our country’s economy and fight for the rights of our farmers. Biotechnology is not bad, but the introduction of genetically modified foods is unethical and unsafe,” nutrition expert Hellen Ngema said.

Lifting the ban is also perceived as a play that would benefit large multinationals such as Monsanto and other powerful organizations.

Kenya’s potential GMO reversal comes after “pressure” from Monsanto, the United States Agency for International Development and the Gates Foundation, according to a report by RT.

The report cited Monsanto’s Water Efficient Maize for Africa, a five-year development project led by the Kenyan-based African Agricultural Technology Foundation that aims to develop a variety of drought-tolerant maize seeds. Incidentally, as the website points out, the project receives funding from the Gates Foundation, United States Agency for International Development and Howard G. Buffett Foundation.

RT reported that in 2008, the African Agricultural Technology Foundation received $47 million from the Gates Foundation.

The argument for GMOs is controversial, to say the least. The pro-GMO camp touts the technology as a solution to malnutrition and global food security, as these crops have been genetically tinkered with certain nutritional benefits and/or spliced-and-diced to resist certain pathogens.

Bill Gates, for one, is known to be pro-GMO seed, especially for the crops’ purported benefits to drought-prone African countries.

In February 2015, the business magnate and philanthropist told The Verge that “GMO-derived seeds will provide far better productivity, better drought tolerance, salinity tolerance, and if the safety is proven, then the African countries will be among the biggest beneficiaries.”

The Verge noted in a report that the Gates Foundation Asset Trust, which manages the foundation’s assets, previously held shares of Monsanto. Indeed, in 2010, it was revealed that the Gates Foundation’s investment portfolio held 500,000 shares of Monsanto stock with an estimated worth of $23.1 million purchased in the second quarter of 2010 (here’s the filing with the Securities and Exchange Commission).

Foundation spokesperson Alex Reid told The Verge that the trust has not held shares of Monsanto “for a few years” and added that the trust is managed separately and does not receive input into what the foundation funds.

Meanwhile, Monsanto has once again made headlines for its business woes and slumping profits.

According to the Associated Press, the embattled company will “eliminate another 1,000 jobs as it expands a cost-cutting plan designed to deal with falling sales of biotech-corn seeds and other financial headwinds.”

Monsanto will now be cutting 3,600 jobs over the next two years, roughly 16 percent of its global workforce.

As of press time the Gates Foundation had not responded to EcoWatch’s request for comment.