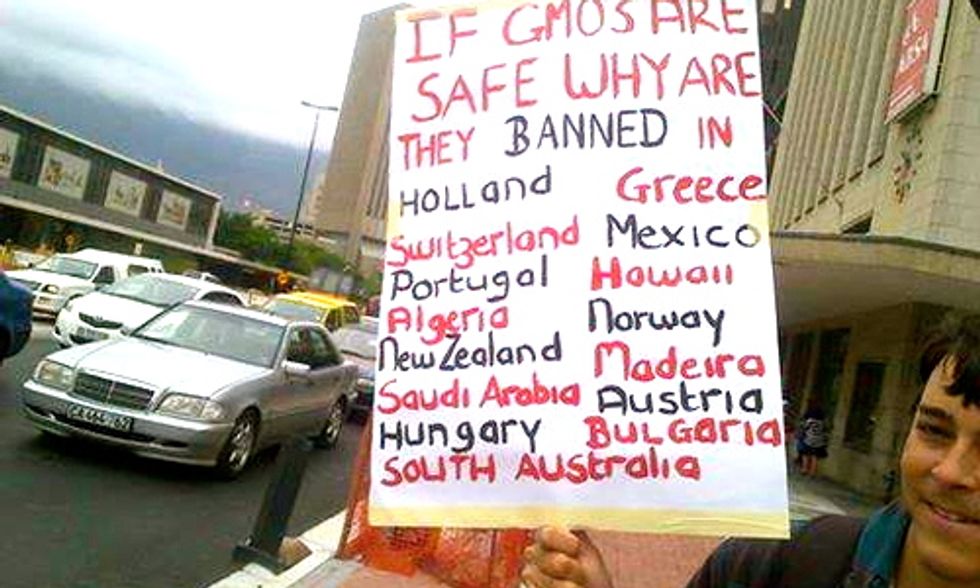 On March 20, the Advertising Standards Authority (ASA) of South Africa ordered Monsanto to immediately withdraw an unsubstantiated radio ad that touted the benefits of crops containing genetically modified organisms (GMOs), according to AllAfrica.

Protests have sprung up across South Africa that question the safety of GMO foods. Photo credit: March Against Monsanto South Africa Facebook Page

The ASA gave Monsanto an opportunity to substantiate its claims, but all the oversight organization received were links to documents on the agriculture giant's website. Since Monsanto didn't provide independent and credible data—which is required by South African law—the order was given to pull the ad from airing in the country's heavily populated Guateng Province where Johannesburg is located.

“We are elated with this decision," said Mariam Mayet, executive director of the African Centre for Biosafety. "Monsanto has already been warned by the ASA as far back as 2007, that it needs to substantiate its claims from an independent and credible expert ... regarding its claims of the so-called benefits of [GMO] crops. However, it appears Monsanto does not have much regard for South African law as it is hell bent on disseminating false information to the South African public."

The ASA also told Monsanto to "ensure that it holds proper substantiation for its advertising claims” or risk attracting further sanctions.

Last week's news from the ASA follows a pair of other high-profile international Monsanto bans in France and Sri Lanka.

Earlier this month, France’s agriculture ministry temporarily banned the sale, use and cultivation of Monsanto’s MON 810 genetically engineered (GE) corn—the only variety that has been authorized in the European Union (EU).

Then, in an abrupt and surprising turn, Sri Lanka ordered a ban on glyphosate, the active ingredient in Monsanto’s top-selling herbicide Roundup, due to concerns the chemical may be linked to a mysterious kidney disease that has killed scores of agricultural workers.