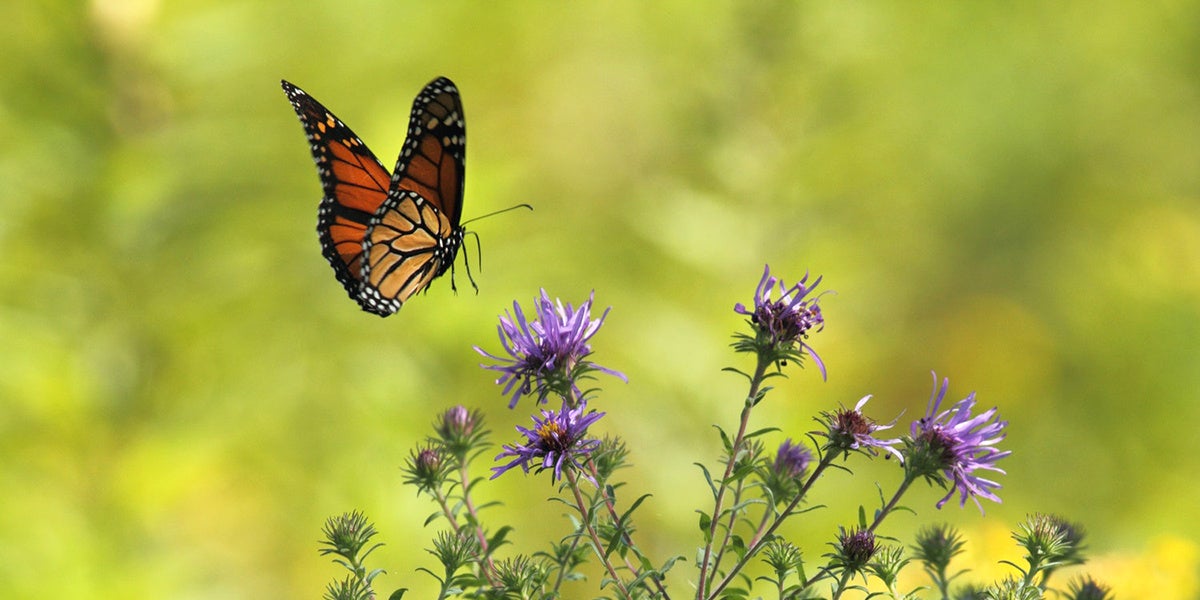 The Migration and Importance of Monarchs

Monarch butterflies, which pollinate many different kinds of wildflowers, are among nature’s great wonders. Their annual migration is one of the most awe-inspiring on Earth: Each fall, millions of these striking black-and-orange butterflies take flight on a 3,000-mile journey across the U.S. and Canada to wintering grounds in Mexico’s Sierra Madre mountains.

The monarch population, which is determined by measuring the number of hectares the butterflies occupy in their Mexico habitat, has declined to 2.48 hectares—almost 30 percent less than last year’s population. The population has been in steady decline for the past 20 years—reaching a high of more than 20 hectares in 1997 and plunging to 0.67 hectares in 2014. Two decades ago, nearly one billion wintering monarchs blanketed the mountain forests of Mexico. Today, that number has dropped by more than 80 percent.

Heavy use of an herbicide called glyphosate (marketed by Monsanto as Roundup) has greatly diminished milkweed, a native wildflower that is the sole food source for monarch caterpillars and the only plant on which adult monarchs lay their eggs. As milkweed disappears, monarch populations have also plummeted, and the annual migration of monarchs to Mexico is in danger of collapse. And yet the U.S. Environmental Protection Agency (EPA) recently reapproved the registration for Dow’s Enlist Duo, a combination herbicide designed to kill milkweed.

Much effort has gone into planting milkweed throughout the continental U.S. in the past several years in an attempt to make up for the milkweed that has been lost through agricultural practices. Planting milkweed is a great way to help other pollinators, too, as it provides nectar to a diverse suite of bees and butterflies.

But this year’s monarch butterfly population demonstrates that we need to do much, much more if we are going to be successful at building its population back up again to secure numbers. We also need to curb the use of pesticides that are eliminating milkweed in the first place and come up with sustainable solutions—not just for butterflies, but for farmers and our public health.

How NRDC Is Helping Secure a Healthy Future for Monarchs

NRDC envisions a future where monarch populations across North America are healthy and resilient. To achieve this, we’re working at the federal, state, and international levels to secure limits on the use of toxic herbicides and create new milkweed habitat.

We’re taking legal action against the EPA to win restrictions on toxic herbicides, such as glyphosate, that are killing off native milkweed. And we’re calling on agribusiness companies to withdraw their toxic products. At the state level, we’re working with officials to plant new milkweed habitat along the monarchs’ migration route. Internationally, we’re leveraging pressure by petitioning UNESCO’s World Heritage Committee to upgrade its protection of monarch wintering habitat in Mexico.

Recent NRDC Milestones in the Fight to Save Monarchs

We mobilized more than 113,000 of our members and activists to sign a petition demanding Dow AgroSciences remove Enlist Duo from the market. Not only that, we generated an outcry against Enlist Duo in Congress that included signatures from 32 lawmakers calling on the EPA to take a closer look at the devastating health and environmental impacts of this herbicide.

On the global arena, we ramped up international pressure, including 50,000 petitions from NRDC members and activists, on the UNESCO World Heritage Committee to declare the Monarch Butterfly Biosphere Reserve in Mexico in danger due to the destruction of monarch habitat in the U.S. and Canada by glyphosate. In response, UNESCO launched a formal evaluation of the request.

Monarch Watch is a nonprofit educational outreach program based at the University of Kansas that focuses on the monarch butterfly, its habitat, and its spectacular fall migration. NRDC partners with Monarch Watch to plant milkweed at schools, churches and garden clubs to help save North American monarch butterflies.

Since 2016, Monarch Watch has been distributing milkweed plants, featured in this Monarchs for Moms campaign, for planting on tribal lands and other locations along the monarchs’ migration route.