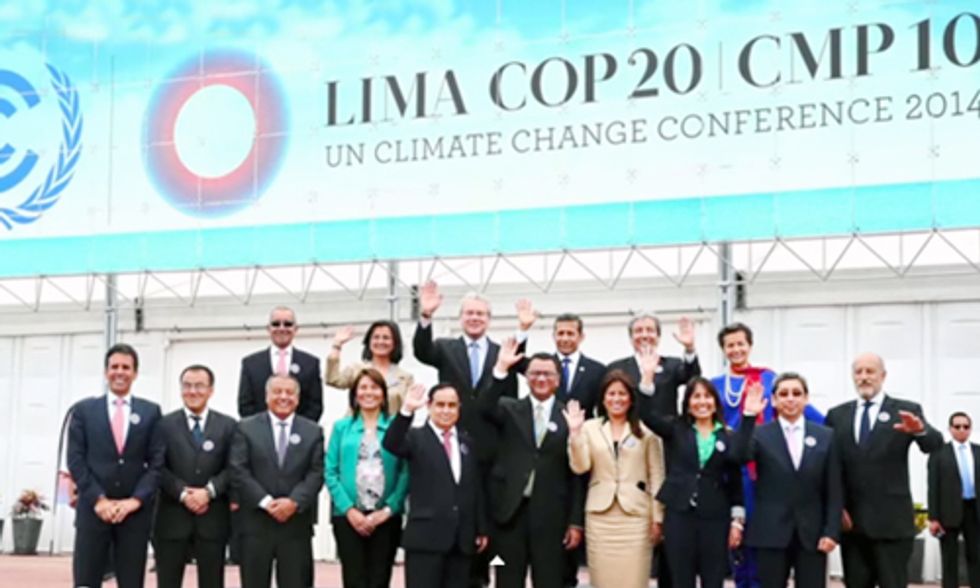 The pressure is on for leaders to move forward on climate change as delegates descend into Peru for the two-week UN climate conference in Lima today.

The UN climate conference in Lima, Peru starts today. Diplomats are calling these negotiations “the best chance in a generation of striking a deal on global warming."

Diplomats are calling these negotiations “the best chance in a generation of striking a deal on global warming” according to the Guardian, with the U.S. and China’s commitment to work together on carbon pollution bringing fresh momentum.

“There is some cautious optimism,” said Leo Hickman, World Wildlife Fund’s (WWF) chief advisor on climate change. “Things feel different than they did six months ago, one year ago, so we don’t want to puncture that.”

COP20 will be vital in setting the scene for next year’s talks. At the end of these two weeks in Lima, it’s hoped a draft deal will be produced that can be finalized in Paris.

But what exactly should we look out for and what can we expect from British delegates?

According to a report by Bloomberg New Energy Finance “the issue of climate finance is central to the post-2020 talks.”

This month has seen a slew of countries pledge contributions to the Green Climate Fund (GCF), including the UK which committed £720m.

While the fund is technically separate to the negotiations, many are pushing for wealthy nations to set a higher contribution target.

Both Greenpeace and WWF in their policy expectation briefing papers call for developed countries to make pledges to the GCF totaling at least USD$15bn and to “scale up financing flows through the GCF significantly in subsequent years.”

However, the UK might not be keen on this for two reasons. As mentioned, Britain has very recently pledged money to the Green Climate Fund, so some will argue it has already done its part.

Secondly, there is an election coming up in May. Without knowing what the next government will look like, politicians might argue they cannot commit a new government to new finance commitments. The same goes for the U.S. whose 2016 election is a year after the Paris talks.

And as the Financial Times reports this morning, China and Brazil have already started criticising the amount of money wealthy countries have pledged to help poorer nations deal with global warming “in a sign that sealing a climate treaty next year still faces serious snags.”

The loss and damage mechanism was created at COP19 in Warsaw last year with the aim to provide financial support for vulnerable countries affected by climate change.

It is a particularly contentious issue within the climate finance debate because wealthier countries—and historic emitters—see it as a compensation mechanism.

According Bloomberg New Energy Finance, “developing countries such as those facing existential threats from sea-level rise believe they are due significant compensation, but developed countries are cautious, saying that they are ‘not willing to sign a blank cheque.'”

This will be a closely-watched space during negotiations. Many hope the red line drawn by countries such as the UK and U.S. will begin to soften.

It is expected that the 2015 Paris deal will most likely be a hodgepodge of individual national post-2020 targets. These targets will come out of the Lima discussions and are expected to be announced next March.

Crucial to the lead up to Paris then, is assessing the targets set by each country. This means that any draft deal reached now must include a monitoring, reporting and verification (MRV) framework.

“A robust and transparent MRV framework is crucial to evaluating the ambition and progress towards each country’s target under a new agreement,” explains the BNEF report.

When it comes to setting national targets, “we need more detail and clarity rather than big statements,” said Hickman.

Understanding how the national targets collectively fit together is key to securing a meaningful deal next year—where on the path to 2°C of warming, or how far off from it, do the targets put us?

As both Greenpeace and WWF argue, countries must not be allowed to set too many different timelines for their commitments. The timelines should be focused around five-year commitment periods—targets for 2025 not just 2030—with a ratcheting-up mechanism so that countries cannot slip back on their pledges.

“We really want to see a proper, decent draft for Paris,” said Hickman. “So a framework or foundation of what that’ll look like and what will its legal status be? It would really help progress to come out with a draft deal.”

Maintaining momentum on climate action in Peru is critical. As energy secretary, Ed Davey told the Telegraph: “These are the last major annual talks before we hit our deadline in Paris next year. We need a deal in Paris–there is no alternative that will protect our national security, our economy and the way of life we take for granted.”

Deutsche Welle
Politics
Ban Ki-moon, Secretary-General of the UN and chair of the Global Center on Adaptation, is seen speaking during a press briefing on the upcoming Climate Adaptation Summit 2021 to be held Jan. 25 and 26. Sem van der Wal / ANP / AFP/ Getty Images