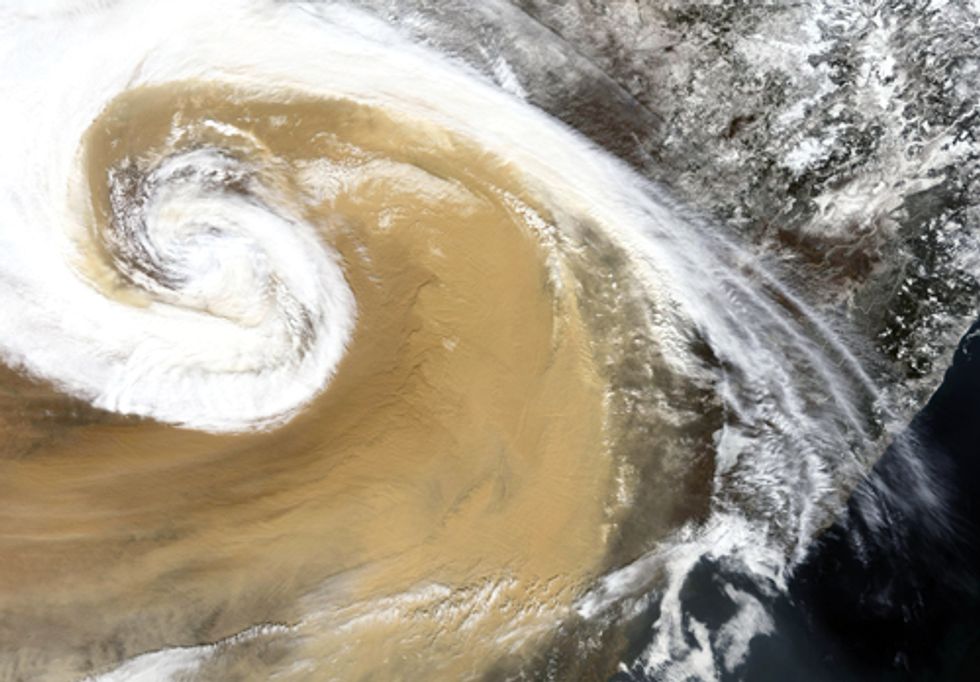 Unfortunately, dust bowls are not just relics of the past. Today two new dust bowls are forming: one in northern China and southern Mongolia and the other in Africa south of the Sahara.

When most people hear the term “dust bowl,” they think of the American heartland in the 1930s, when a homesteading wheat bonanza led to the plowing up of the Great Plains’ native grassland, culminating in the greatest environmental disaster in U.S. history.

Despite warnings from researchers and some farmers, history repeated itself in the Soviet Virgin Lands Project in the 1950s to early 1960s. Some 100 million acres (40 million hectares) of grassland were plowed under in Russia, Kazakhstan and western Siberia during Premier Nikita Khrushchev’s push to produce ever more food from the land. When drought hit, the topsoil started to blow away. By 1965, nearly half the newly planted area was degraded by wind erosion. Yields plummeted. Ultimately farmers staged a retreat, abandoning much of that land.

Unfortunately, dust bowls are not just relics of the past. Today two new dust bowls are forming: one in northern China and southern Mongolia and the other in Africa south of the Sahara. Whereas the dust bowls in the U.S. and the Soviet Union were the result of overplowing, the main culprit in Asia and Africa is overgrazing. Although arid or semiarid grasslands are typically better suited for grazing livestock than for farming, once they are overstocked their protective grass covering deteriorates and they face erosion all the same.

Forty percent of China’s land area is grassland. Following agricultural reforms that began in the late 1970s, in which collectively owned livestock were transferred to household ownership, China’s cattle herds grew from 52 million in 1980 to nearly 105 million in 2000, according to the U.N. Food and Agriculture Organization (FAO). Meanwhile, China’s population of sheep and goats ballooned from close to 180 million to 280 million. Such a high concentration of grazing animals has put unsustainable pressure on the land. For comparison, the U.S.—a country with comparable grazing capacity—hosts a similar number of cattle but only 9 million sheep and goats.

The fastest growth in China’s livestock occurred with goats; starting in the mid-1980s, the herd size doubled in just 10 years. This is particularly troubling because a fast expansion of goat populations relative to cattle can indicate grassland deterioration. Goats are hardy, able to survive where few other grazers can. They can make efficient use of remaining greenery on nearly barren landscapes. Yet large numbers of goats often portend further environmental degradation because as the animals remove existing vegetation, they leave soils vulnerable to erosion from wind or rain.

Noting that an extraordinary 90 percent of China’s grasslands are degraded, the Chinese government has embarked on restoration programs, including re-vegetation, grazing bans and livestock confinement. The government also has moved nomadic herders off the land or limited their movement under the guise of environmental protection. Evidence from the field, however, reveals that disrupting traditional grazing patterns can exacerbate land degradation and leave pastoralists more vulnerable to the vagaries of the weather.

FAO data indicate that since 2000, China’s cattle numbers have shrunk by 20 million, and the growth in sheep and goat herds appears to have stalled. Whether this can be attributed to policies aimed at reducing herd size or the relocation of herders is unclear.

Meanwhile, much damage has been done, and China’s dust bowl rages on. More than a quarter of China’s land area is covered by desert, and each year spreading sands claim additional territory. Expanding deserts in the arid northwest are merging. Since 1950, more than 24,000 Chinese villages have been abandoned or are seriously in danger of succumbing to traveling dunes, with some 35 million people directly affected.

The effects reach far beyond the desert margins. Spring is the dust storm season. The snow melts and the wind picks up, transporting dust and sand particles from northern China and Mongolia as far as Beijing and on to Korea and Japan, sometimes even crossing the Pacific to cloud parts of North America. The China Meteorological Administration reports that a single severe dust storm in 2006 dumped 330,000 tons of dust from the west onto Beijing: a stunning 44 pounds for each of the city’s residents. In 2007, a dust storm originating in China’s spreading Taklimakan Desert circled the globe in just under two weeks.

As bad as Asia’s dust storms are, the largest source of dust in the atmosphere on a global scale is Africa. Dust has long traveled out of Africa’s deserts and drylands, which make up two thirds of the continent’s land area; in fact, dust blowing out of Chad’s Bodélé Depression is thought to help fertilize the lush Amazon rainforest. Nearly 75 percent of Africa’s drylands are degraded. With land suffering the double whammy of drought and overuse, dust carried out of West Africa has increased over the last 40 years. Studies suggest that the larger influx of African dust may even be teaming up with rising ocean temperatures to damage Caribbean coral reefs.

In the Sahelian zone south of the Sahara the squeeze is on, with fast-growing populations trying to eke out a living by farming or grazing herds on ever less productive land. Desertification is particularly acute in Burkina Faso, Chad, and Niger, as well as in Nigeria, Africa’s most populous country, where an estimated 868,000 acres are lost to desert each year. Conflicts over land between herders (largely Muslim) and farmers (largely Christian) are legion, with both groups exacerbating erosion. Nigerian pastoralists, largely in the country’s north, have dramatically expanded their herds, putting additional pressure on soils already vulnerable because of erratic rainfall. In 1990, Nigeria had 14 million cattle, 12 million sheep, and 23 million goats. By 2010, cattle populations had climbed just slightly to 17 million, but the number of sheep tripled to 36 million, and goats jumped to 56 million.

Both Africa and China have launched ambitious initiatives to halt the spread of deserts with Great Green Walls of trees. Political leaders—including former Nigerian President Olusegun Obasanjo (an early champion of the African Wall) and Abdoulaye Wade, former President of Senegal—tend to favor such large symbolic projects. Indeed in the throes of the U.S. Dust Bowl, President Franklin D. Roosevelt was similarly taken with the idea of a giant shelterbelt. But as happened in the U.S., desert containment plans in the Sahel and China have broadened in scope beyond basic tree belts to encompass more holistic land management and poverty alleviation activities. The limited success at holding back the sands in China thus far, where since the early 1980s an estimated 40 billion trees have been planted (although far fewer have survived), confirms that stopping desertification involves much more than planting trees.

Climate change is complicating the matter even further. Large parts of the planet are trending toward dryness, with a marked increase in aridity since the 1970s, when global temperatures started to climb. As the Earth heats up further, droughts are projected to become even more pronounced. A rapid reduction in greenhouse gas emissions to prevent runaway global warming, along with a slowdown in the growth of both human and livestock populations to reduce pressure on the land, are what it will take to increase our chances of leaving dust bowls to history.