Moby Says ‘Save Our Bees’ From Neonicotinoids 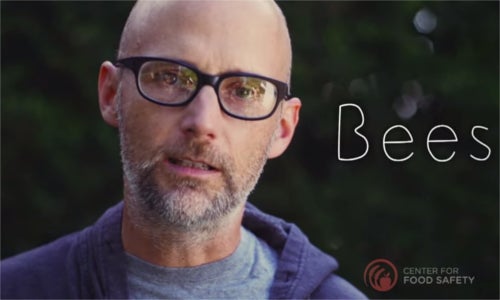 Moby helped kick the electronic dance music movement into high gear in the ’90s. He’s almost as well known for his longtime veganism and his avid support of animal rights. Originally from New York, he moved to Los Angeles several years ago, where he has a four-acre spread, to be closer to nature.

One of the things he likes to be closer to is bees, as he explains in this new video sponsored by the Center for Food Safety.

“When I first moved in, I was sitting by the pool and I heard this sound like a thousand outboard motors and this huge swarm of bees, about 10,000 bees, flew over and around me,” he recalls as he gives viewers a tour of his grounds. “And I just sat there, I had no idea what was going to happen, whether I was going to get stung to death. But they just moved calmly past me and they settled in a cave in a cliff over here behind me. It makes me incredibly to know that the bees on my property are happy and thriving. A friend of mine who is a bee scientist estimates that on the property there are about 30,000 happy healthy bees.”

He goes on to talk about colony collapse and the role of pesticides, especially neonicotinoids, in the bee die-offs in the last decade. He urges viewers to grow bee-friendly plants, get educated, spread the word and get involved in the movement to protect bees.