MLK Would Have Been an Environmental Leader, Too 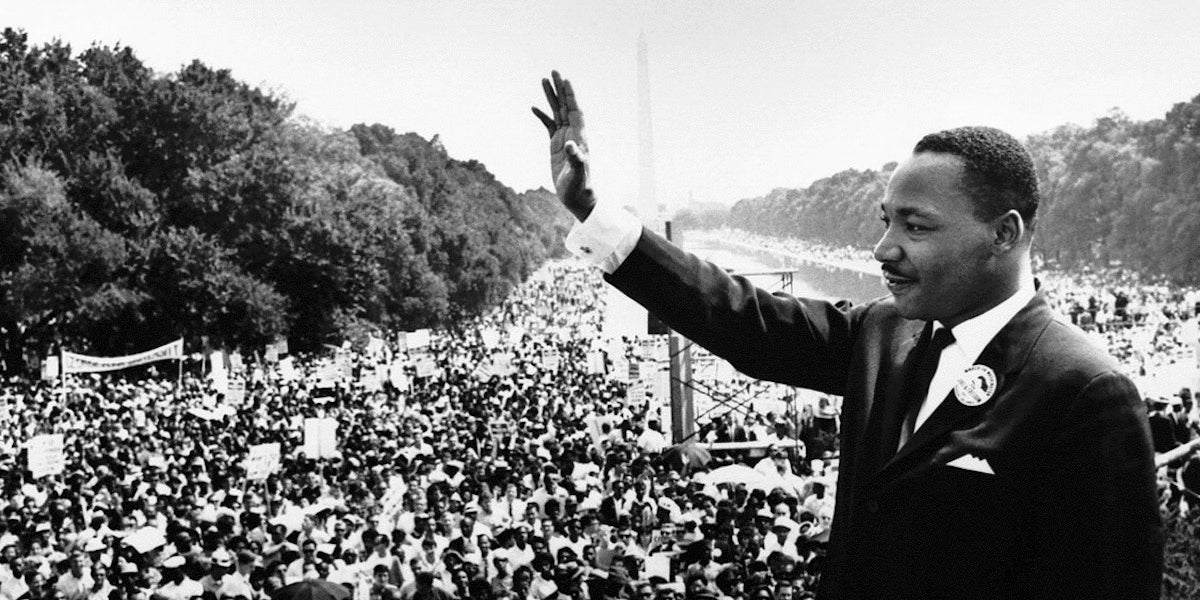 Martin Luther King Jr. at steps of the Lincoln Memorial where he delivered his famous, "I Have a Dream" speech in 1963.

“Injustice anywhere is a threat to justice everywhere.”
Dr. Martin Luther King Jr.’s words and actions continue to resonate on the 90th anniversary of his birth.

As the country honors the life and legacy of the iconic civil rights leader today, we are reminded that the social justice and the climate movements are deeply connected.

Environmentalism isn’t just about saving the whales and saying no to plastics—it’s also about ensuring clean water, air and land for all.

Atmospheric sciences professor Marshall Shepherd argues in a
Forbes opinion piece that if Dr. King were alive today, he would have been an environmental advocate.

“Dr. King, like most great humanitarians, fought for anyone facing injustice. He likely would have been an activist for the planet once he saw who was most vulnerable,” Shepherd wrote.

Reflect on Dr. King and his genuine message of love and service to ALL people. Ignore and call out hate, envy and mean-spiritedness on Twitter and life. Why Climate Change Would Have Alarmed Dr. Martin Luther King #MLKDay via @forbes https://t.co/MZMnZvX9lw

The U.S. Environmental Protection Agency’s National Center for Environmental Assessment released a
study last year that found that low-income populations and people of color are disproportionately exposed to air pollution.

Additionally, the most recent
U.S. National Climate Assessment found that these communities will suffer the most from Earth’s rapidly rising temperatures.

“People who are already vulnerable, including lower-income and other marginalized communities, have lower capacity to prepare for and cope with extreme weather and climate-related events and are expected to experience greater impacts,” the authors wrote.

Hurricane Katrina in New Orleans and lead-struck Flint, Michigan, for instance, brought the issue of “environmental racism” to the forefront. The term is used to describe how poverty and segregation has forced many black citizens and other racial minorities to live in heavily industrialized and polluted areas with dilapidated or aging civil infrastructure—factors that could lead to poor health outcomes, compromised education, loss of livelihoods and even loss of life, according to the NAACP.

That’s why our some of our elected leaders are pushing the “Green New Deal” to update the nation’s infrastructure and to transition the country’s grid away from polluting fossil fuels to renewable energy.

“By moving to 100 percent clean energy and putting justice first, we can limit global warming while creating green-collar jobs in every community, and building a healthier, more sustainable, more equitable society,” Rep. Donald McEachin (D-Va) and Reverend Leo Woodbury, a pastor of Kingdom Living Temple, wrote in a joint
op-ed for The Hill.

“We need a new era of climate justice, and the communities most affected by climate change must have prominent seats at the table as we usher in this new era. All Americans deserve to share in the benefits of clean energy, including lower utility bills, access to well-paying, green-collar jobs, and healthier air and water,” McEachin and Woodbury wrote.

Citing the immemorial words of Dr. King, they concluded: “All life is interrelated, and we are all caught in an inescapable network of mutuality, tied in a single garment of identity. Whatever affects one directly, affects all indirectly.”