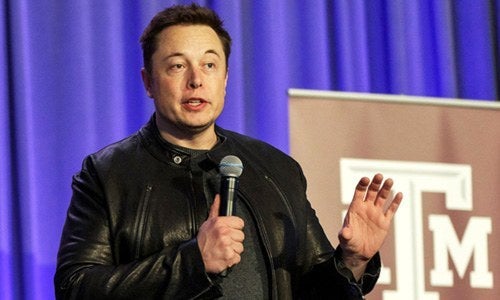 A team of student engineers from Massachusetts Institute of Technology won Best Overall Design in SpaceX’s competition to design a pod for a Hyperloop system that would transport people through high-speed vacuum tubes.

“The public wants something new,” SpaceX CEO Elon Musk told the attendees at this first-ever competition on Saturday at Texas A&M University. “And you’re going to give it to them.”

More than 115 student engineering teams representing 27 U.S. states and 20 countries competed. Musk challenged the teams to “design a passenger pod to run in the Hyperloop, a low-pressure tube between LA and San Francisco which will use a railgun to rocket passengers between the two cities at supersonic speeds,” according to The Guardian.

The top 22 teams will build their pods and test them this summer at what Texas A&M called the “world’s first Hyperloop test track”—a one-mile track being built next to SpaceX’s headquarters in Hawthorne, California. “The prototype pods would be half the size of the system that Musk envisioned and would not carry people,” Phys.org noted.

The idea for the Hyperloop was popularized by Musk in a 2013 Tesla blog post, in which the entrepreneur outlined his rough plans of how the system would work.

Musk explained in the post that he was “quite disappointed” with the state of California for approving a “high speed” rail project that was “one of the most expensive per mile and one of the slowest in the world.”

The underlying motive for a statewide mass transit system is a good one. It would be great to have an alternative to flying or driving, but obviously only if it is actually better than flying or driving. The train in question would be both slower, more expensive to operate (if unsubsidized) and less safe by two orders of magnitude than flying, so why would anyone use it?

If we are to make a massive investment in a new transportation system, then the return should by rights be equally massive.

Musk went on to explain the technical feasibility of transporting people in pods through a vacuum tube at roughly 700 miles per hour.

“The proposal was quickly criticized by experts in the field, who questioned Musk’s figures on the cost of land by a highway, the price of concrete and the thermal expansion of steel,” The Guardian said. “But in the following years multiple companies picked up Musk’s concept and developed it further.”

And now it appears the federal government is interested in a Hyperloop system. U.S. Sec. of Transportation Anthony Foxx spoke at the competition on Friday, telling participants that “the idea merits consideration for a public-private partnership to develop it further,” Ars Technica reported.