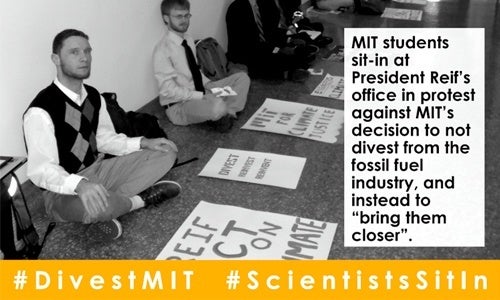 Today at 6.30 a.m., a dozen students began a sit-in at the doorstep of their president’s office in opposition to MIT’s announced decision yesterday to “not divest [its $13.5 billion endowment] from the fossil fuel industry,” including climate denying corporations, and instead “bring them closer.” It is the first time in a quarter century that MIT has seen such unrest. 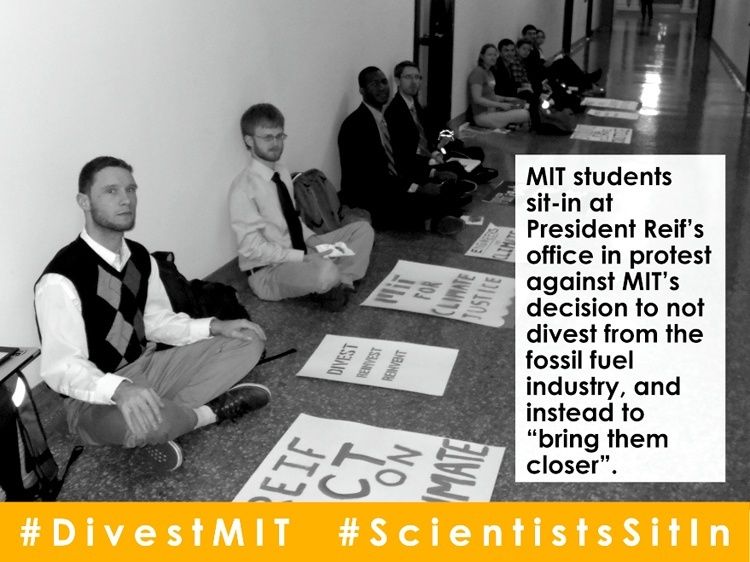 MIT’s divestment campaigners are particularly furious that their president has chosen not to sell stocks from coal and tar sands companies, an action backed 9-to-3 by the president’s own advisory committee in June.

“Divestment from coal and tar sands is a no-brainer, and would have unified rather than ostracized MIT’s community” commented Geoffrey Supran, an MIT PhD student sitting-in, and a member of President Reif’s climate advisory committee and of the student group advocating divestment, Fossil Free MIT. “With $2.6 trillion of precedent—including at Stanford, Oxford, and UC—divestment from coal and tar sands is financially prudent, scientifically consistent, morally right, and politically effective.”

President Reif’s decision to also not address climate science disinformation is another reason why many are protesting. Just this week, congressmen such as presidential candidate Bernie Sanders have called for a federal investigation of ExxonMobil’s decades of climate lies. Meanwhile, MIT’s plan “deplores” climate science disinformation, yet proposes nothing to deal with it, entirely ignoring the unanimous recommendation of the president’s committee for an Ethics Advisory Council to “explicitly combat disinformation and avoid inadvertently supporting disinformation through investments.” In fact, the plan argues that MIT ought to strengthen its relationship of “great respect”, “candor and collaboration” with fossil fuel companies (even including coal companies), described as “the same” as that between MIT’s administrators and its students.

“We’re sitting-in because MIT has put money before morals and its students’ futures, choosing to side with Big Oil and the Kochs instead of the thousands of students, staff, faculty, and alumni—not to mention our president’s own committee—calling for divestment,” added Supran.

President Reif’s decision comes during a $5.5 billion capital campaign—the largest in the Institute’s history. MIT receives more industry funding than almost any other university in the country, its research sponsors including ExxonMobil, BP, Chevron, Eni, Saudi Aramco, Shell, Statoil, Total, and the American Petroleum Institute and its 600-plus members. Climate disinformation bankroller David Koch has given MIT $185 million and is a Life Member of MIT’s Board of Trustees. Last November, MIT signed a five-year $25 million deal with ExxonMobil, which has in recent days cited its affiliation with MIT in an effort to greenwash its history of denialist campaigns.

Jeremy Poindexter, an MIT PhD student working on solar cells explained why he is among those camped outside President Reif’s office:

“We won’t stand idly by while divestment gets tossed aside despite support from thousands of MIT community members. It’s ironic that in a climate action plan inspired entirely by divestment, our administration claims that engagement with the fossil fuel industry is a better action. In reality, divestment has a proven theory of change toward limiting warming to 2 degrees C. What’s President Reif’s? What have MIT’s decades of inside-access to fossil fuel interests gotten us? The answer is an industry that has lied about climate science, pours hundreds of millions of dollars every year into lobbying against renewables, and spends hundreds of billions of dollars pursuing a business model scientifically incompatible with holding back catastrophic climate change. And yet MIT has decided to continue investing more than half-a-billion dollars in this industry undermining our own work.”

On the action plan’s other proposals, Supran commented, “This plan is business-as-usual repackaged. It’s a campus emissions target consistent with an unacceptable 3.5 degrees of global warming. It’s MIT’s ordinary fundraising for energy research, wrapped up in a “$300 million” soundbite. It’s too little, too late.”

MIT’s divestment decision, part of its Plan for Action on Climate Change, flies in the face of more than 3,500 petition signatures from MIT community members, the recommendations of the MIT president’s own committee to divest from coal, tar sands, and climate denying corporations, a resolution from Cambridge City Council, and separate open letters from MIT student groups, faculty, alumni, and 33 prominent climate scientists and advocates, among them James Hansen, the President of the Rockefeller Brothers Fund, Noam Chomsky and Mark Ruffalo.