The Mission of Scott Pruitt: End the EPA as We Know It 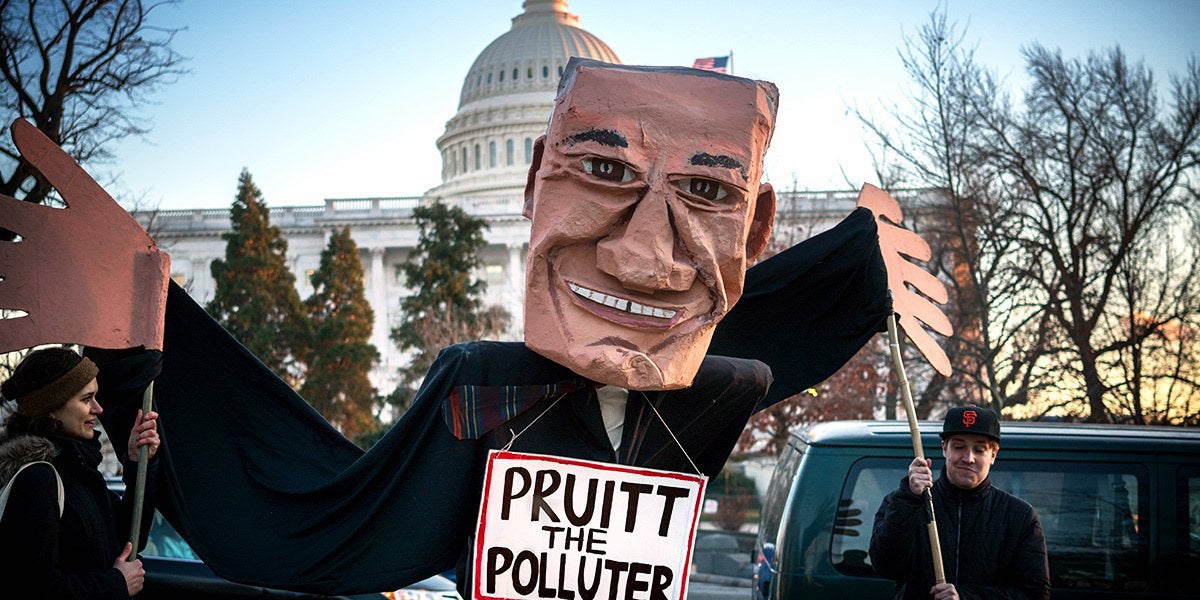 U.S. Environmental Protection Agency (EPA) Administrator Scott Pruitt headed to Congress for testimony before the House Energy and Commerce subcommittee on the environment. The topic of the hearing? “The Mission of the U.S. EPA.”

Since Pruitt has been incredibly sparing in his appearances on Capitol Hill, this is a rare chance to ask hard questions of the most controversial administrator in the history of the EPA.

Since the EPA has spent decades as a partisan target, it comes as no real surprise that it is badly underfunded. Discounting a small bump following the 2009 stimulus bill, the agency’s budget has declined or stayed stagnant since the mid-2000s. Even before the Trump administration proposed a draconian 31 percent cut, the agency was on a starvation diet courtesy of Congressional Republicans.

Under Pruitt, the unmistakable agenda is to cut the agency even further—and nowhere is this more obvious than staffing levels. In July, it was revealed that Pruitt was seeking to shrink the EPA through the early retirement of as many as 1,227 employees in fiscal year 2017 alone. Although only 372 workers opted for an early out, the EPA is on course to be its leanest since the late 1980s.

Since 1978, the EPA has looked to its Scientific Advisory Board for input on regulations and research priorities. It is meant to be a panel of neutral experts who are leaders in their respective fields. Or it was until Scott Pruitt got there.

In October, Pruitt issued a directive banning scientists who receive grant funding from the EPA from serving on its advisory board. Ostensibly designed to prevent conflicts of interest and encourage “fresh perspectives,” it isn’t hard to imagine what this means in practice: an EPA even more beholden to industry “science” and its priorities of profit and unlimited pollution. Pruitt’s pick for a new Chairman of the Board, a Texas state official who thinks smog isn’t that bad, seems to bear this theory out.

Climate change isn’t free. The costs inflicted on present and future generations by rising sea levels, droughts and superstorms are all burdens of our fossil fueled economy.

To weigh the costs of climate change, the Obama administration used something called the social cost of carbon—a per ton estimate pegged most recently at $36 designed to price the value of preventing carbon pollution. This was used to model the economic costs and benefits of numerous federal regulations, including the landmark Clean Power Plan.

Unsurprisingly, the Trump administration released an Executive Order in March withdrawing the previous estimates. This in turn gave federal agencies like the EPA a free hand to skew the cost of carbon pollution and make their climate-killing deregulatory agenda seem like an implausibly good deal.

The good news is that this week seven Senators led by Sheldon Whitehouse requested the Government Accountability Office look into the alternative math coming from Trump administration. One example the Senators cite as particularly interesting is an estimated social cost of carbon of $1 used to calculate the benefits of repealing the Clean Power Plan. The estimate under the previous administration had been $45.

This isn’t a “back to basics” agenda that Pruitt likes to innocently claim. The mission of the EPA is to protect our air and water, but it’s clear that the mission of Scott Pruitt is to end the EPA as we know it. Congress must hold him accountable.