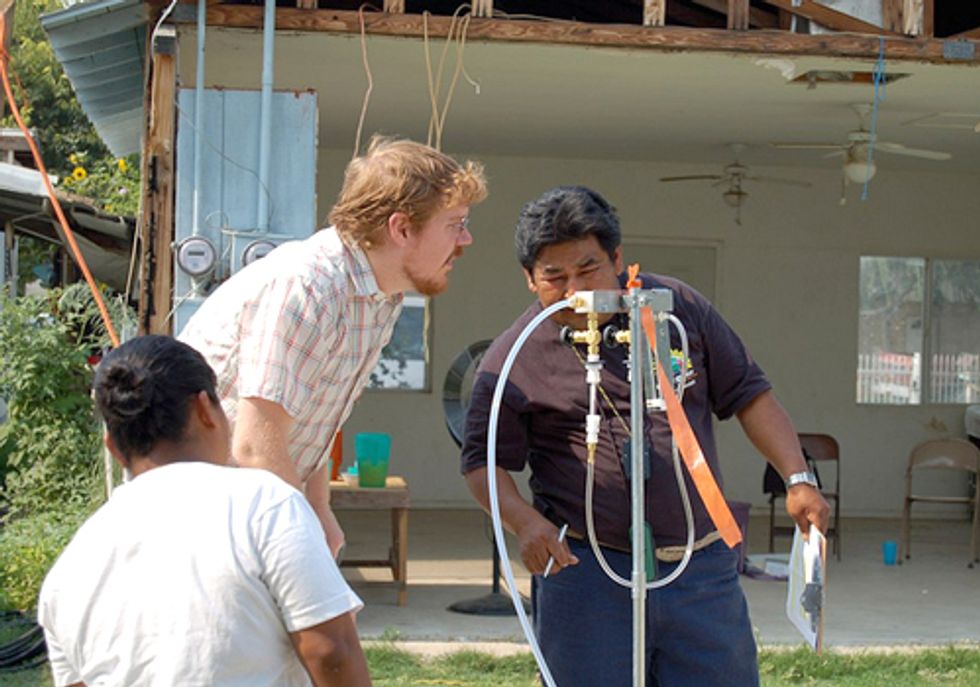 A report released on May 17 indicates that Central Minnesota communities face frequent exposure to multiple pesticides in the air they breathe, and residents are calling for stronger protections from one common potato fungicide.

Pesticide Drift Monitoring in Minnesota, authored by Pesticide Action Network (PAN), is the result of a community-led air monitoring study conducted by a group of concerned Minnesotans. Residents found the fungicide chlorothalonil present in 64 percent of air samples taken near their homes. Current U.S. Environmental Protection Agency (EPA) rules do not consider the health effects of breathing chlorothalonil.

“This on-the-ground monitoring documents the fact that many Minnesotans are regularly exposed to pesticides in the air they breathe,” said Emily Marquez, PhD, staff scientist at Pesticide Action Network. “State and federal officials should act on these results by providing greater health protections for rural residents, and more carefully considering the science around inhalation effects. Even at low levels, airborne pesticides can raise serious health concerns.”

Regulations for chlorothalonil were set by EPA using studies based on ingesting the chemical, even though the agency considers chlorothalonil ingestion to be “slightly toxic to non-toxic” when ingested and “highly toxic or acutely toxic” when inhaled. In March, EPA began a new review of chlorothalonil, which will include inhalation studies.

“Living near potato fields, I’ve frequently been exposed to pesticide drift in the last 15 years or so,” said Park Rapids resident Carol Ashley, member of Minnesotans for Pesticide Awareness. “One type of pesticide—chlorothalonil—wipes me out so that I can barely move for days. I have to struggle to breathe.”

Chlorothalonil is classified by EPA as a “probable” carcinogen. Along with cancer, other probable health impacts from exposure include immunological reactions in the airways and skin, pneumonia and kidney failure.

Residents formed Minnesotans for Pesticide Awareness in 2006 after observing health problems in communities living near potato fields. The group set out to learn more about the potential harms of pesticide drift. Later, the group connected with members of the White Earth Tribal Nation living near potato fields, who were also observing health problems.

Potato fields cover roughly 50,000 acres of Minnesota. Fungicides are applied to a significant majority of those potato acres—98 percent in 2005. Chlorothalonil is the most commonly used fungicide, applied to 83 percent of the state’s potato fields.

Members of the citizen group approached PAN to use their Drift Catcher tool to monitor pesticides drifting from nearby fields. PAN invented the Drift Catcher to address a void in the science around pesticide exposure. A simple, inexpensive and scientifically robust device, the Drift Catcher is used by community members to collect air samples which can then be analyzed for pesticides, enabling concerned citizens to document otherwise invisible chemical exposures.

A total of 340 field samples were taken in 19 locations in communities throughout Central Minnesota. Evidence of one or more pesticides was found in 64 percent of the samples, and pesticides were detected in all but two sites.

“Minnesotans have a right to know what’s in the air, what their families are breathing,” said Norma Smith, resident of Frazee, member of Minnesotans for Pesticide Awareness and one of the air monitoring participants. “The Drift Catcher results are evidence that pesticides are drifting and ending up in our yards, homes and farms. EPA and the Minnesota Departments of Health and Agriculture have a responsibility to stand up for the health and well-being of families like ours.”

Air monitoring participants are hopeful that environmental and public health officials will use these results as evidence of widespread pesticide exposure, and consider additional steps to safeguard all Minnesotans.