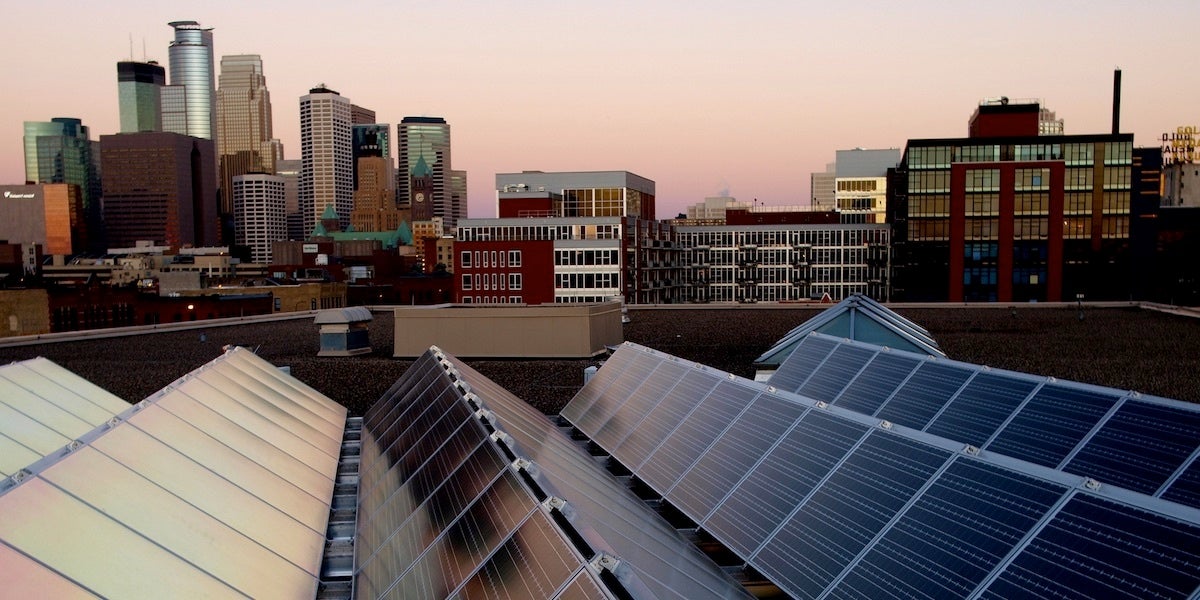 Minneapolis City Council and Mayor Jacob Frey announced Friday the city’s pledge to achieve 100 percent
renewable electricity for municipal facilities and operations by 2022 and citywide by 2030.

Minneapolis is now the largest city in the Midwest and the 65th city to join the nation’s expanding clean energy movement, according to the
Sierra Club‘s Ready For 100 Campaign.

The unanimously approved
resolution was crafted in response to the threat of climate change that is “caused primarily by the combustion of fossil fuels,” the city government explained.

The city also declared its opposition to the
federal rollback of climate policy and reaffirmed its ongoing commitment to the goals of the
Paris climate agreement.

Minneapolis is committing to using 100% renewable energy by 2030. From our pollution control ordinance to green business incentives to becoming the first perc-free city in the USA, Minneapolis will continue leading on climate change & environmental issues. pic.twitter.com/BLRcF483my

“Climate change is one of the gravest challenges we face, and renewable energy is one of the solutions,” said Council Member Cam Gordon, co-author of the resolution. “This resolution builds on the work of our adopted Climate Action Plan, and will help us reach our aggressive goal of reducing carbon emissions by 80 percent by 2050.”

The City Coordinator’s Office has now been directed to bring forward a blueprint by the first quarter of 2019 on how to reach this ambitious goal.

The blueprint will also include strategies “to ensure that all consumers, especially those who have been left out of the benefits of energy programs in the past, communities of color, low-income communities, renters, and communities that have borne the brunt of past environmental racism, receive equitable benefit from this transition.”

Council Member Steve Fletcher, co-author of the resolution noted, “In addition to being the right thing to do for the planet, investing in renewable energy allows us to keep more energy generation revenue in the city and create jobs for Minneapolis people of color who have been historically excluded from the old energy economy.”

Renewable energy is Minnesota’s second largest source of electricity generation, besting nuclear power but trailing coal, the
Star Tribune reported last month. The newspaper observed that cost of wind energy in the state now appears lower than electricity produced from both natural gas and coal, even without tax subsidies.

In addition to the city’s pledge, Mayor Frey also joined the Sierra Club’s
Mayors for 100% Clean Energy initiative, a growing coalition of nearly 200 mayors aiming to transition their communities to clean energy.

Mayor @jacob_frey signing the #Mayors4CleanEnergy pledge! He joins nearly 200 Mayors across the country who have pledged their support for a community transition to 100% clean, renewable energy – echoing the City Council's 100% resolution. #ReadyFor100 #BeyondCoal pic.twitter.com/R9RRRK9e1U