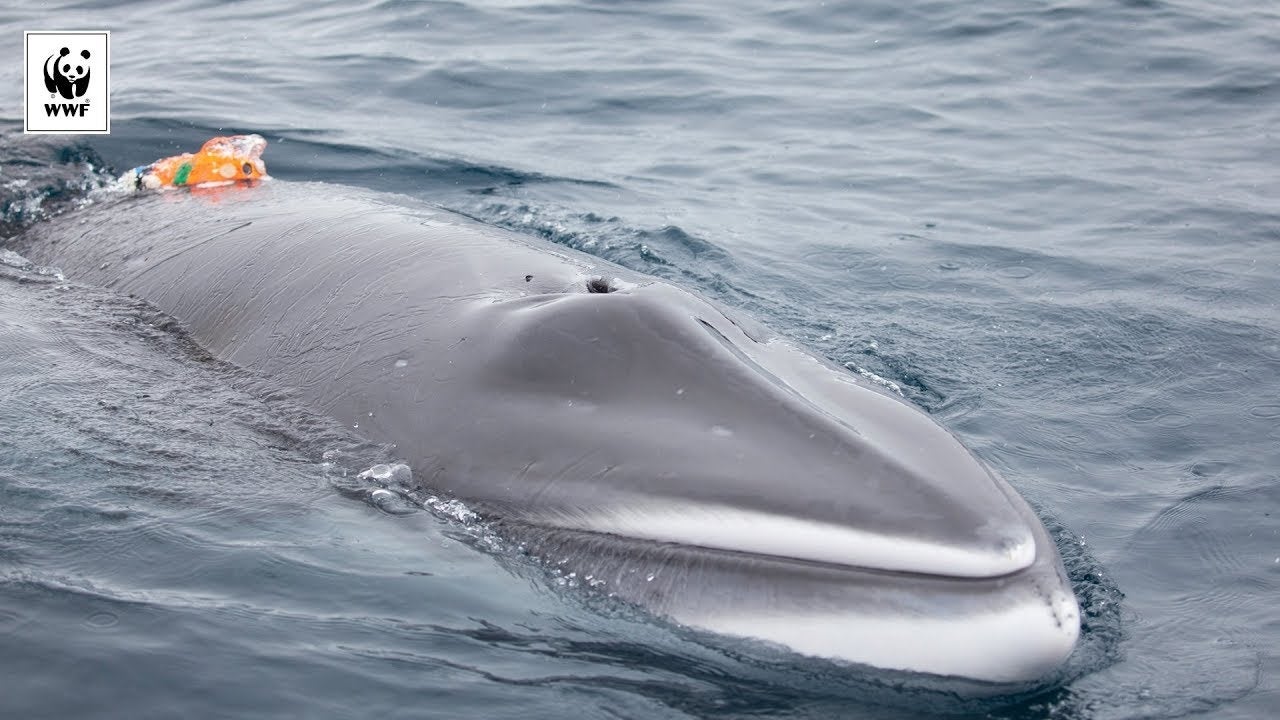 For the first time ever, scientists in Antarctica have attached a camera to a minke—one of the most poorly understood of all the whale species.

And in an incredible bonus for researchers, the camera (which adheres with suction cups) slid down the side of the animal—but stayed attached—providing remarkable video of the way it feeds.

The initial camera position would not have recorded the whale’s throat expanding.

Minkes grow to about 8 to 9 meters (approximately 26 to 30 feet) and are the second smallest baleen whale. They filter primarily krill or small fish out of the water using specialized feeding plates, known as baleen, in a method known as lunge feeding.

When their much larger cousins, like blue or fin whales, lunge feed they take in huge volumes of water that can equal their entire body mass and take up to a minute to process each gulp.

“What’s amazing to me is how fast the minke swims and how quickly it can feed,” said Dr. Ari Friedlaender, an associate professor from the University of California Santa Cruz and lead scientist on the research.

“The video showed the tagged minke moving at up to 24 kilometers per hour [approximately 15 miles per hour] as it accelerates to feed. We could see individual feeding lunges and the expansion of the throat pleats as they filled with prey-laden water. What was remarkable was the frequency of the lunges and how quickly they could process water and feed again, repeating the task about every 10 seconds on a feeding dive. He was like a Pac-Man continuously feeding.”

Friedlaender said the minke’s relatively small size, which helps it maneuver through the sea ice, and its ability to feed quickly has helped the species carve out a niche in Antarctica.

“Larger whales try to avoid ice because they can’t maneuver as well so they feed in open water. They also need dense patches of krill or fish to offset the energy required to accelerate, lunge and process large gulps of water.

“But minkes can feed among the ice because of their size. Interestingly, their small size also decreases the energy it takes to feed, and thus they can take advantage of less dense patches of prey,” he said.

He described the event of deploying the first camera tag on a minke as “one of the most memorable moments of my scientific life” as other researchers and a crowd of tourists aboard the OneOcean Expeditions vessel, Akademik Ioffe erupted into cheers.

Chris Johnson, senior manager of WWF’s Antarctic Program, who joined Friedlaender on the trip as part of the research team, said the experience was made even more unforgettable by the personality of the tagged minke.

“This animal just kept hanging around the boat, rolling over on its side, just as fascinated by us as we were by him. He then really put on a show breaching repeatedly. It really looked like he was having fun,” Mr Johnson said.

Sea ice is an important part of a minke’s habitat, a place where they feed and hide from killer whales.

But because of climate change, sea ice in the Antarctic Peninsula now advances two months later and retreats more than one month earlier.

“Over the last 50 years, the number of days when sea ice covers the Antarctic Peninsula has decreased by about 80. For minkes and other ice-dependent species, that’s 80 fewer days with suitable habitat,” Friedlaender said.

Scientists are also worried that critical feeding areas for baleen whales—and other krill predators such as penguins, seals and seabirds–overlap with the krill fishery.

This fishery is primarily concentrated along the Antarctic Peninsula and Scotia Arc, an area rich with Antarctic krill.

WWF is concerned that industry wants to increase the total krill catch.

Chris Johnson said WWF would continue to advocate for more marine protected areas in Antarctica as they are vital to conserve biodiversity and are based on sound science.

He said at present the Commission for the Conservation of Antarctic Marine Living Resources (CCAMLR) considers data on penguins, seals and seabirds but not whales when considering new protected area proposals and fisheries management.

“WWF is working with Dr. Friedlaender and his team to put his vital new information about whales before decision makers.

“These tags are helping us understand not only how baleen whales forage but also the locations of their favorite feeding spots. This will allow us to work with CCAMLR and the industry to keep fishing away from these critical feeding areas,” he said.

“We hope that when CCAMLR next meets it will pass new proposals for important new marine protected areas for the Antarctic Peninsula and Weddell Sea and a proposal for East Antarctica that was rejected last year,” he said.

Friedlaender’s work is supported by OneOcean Expeditions and is in collaboration with scientists from Stanford University and the California Ocean Alliance. It is conducted under permits granted from the National Marine Fisheries Service and Antarctic Conservation Act, including institutional animal care and use protocols.

The research is being conducted in collaboration with scientists at the Australian Antarctic Division in Hobart and under the auspices of the International Whaling Commission’s Southern Ocean Research Partnership (IWC-SORP). The aim of the partnership is to implement and promote non-lethal whale research techniques to maximize conservation outcomes for Southern Ocean whales.