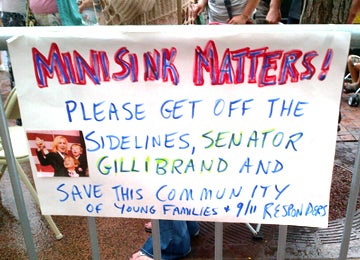 Residents of Minisink, NY, and The Mothers Project, founded by Angela Monti Fox, mounted a peaceful demonstration outside Sen. Kirsten Gillibrand (D-NY)’s Midtown offices Tuesday. Together they are calling on the Senator to publicly stand with the community of Minisink, which has been entrenched in a groundbreaking case against the natural gas industry that is now headed to the U.S. Court of Appeals.

For two years, residents of Minisink, a small town in Orange County, home to many organic farms, young families and a large contingent of 9/11 First Responders with health issues, have waged an unusually spirited resistance to a 12,260 horsepower compressor station sited in a bucolic area, in which over 200 families live within half a mile. Construction was permitted before a final legal determination, and now the facility is on-line. Speakers at the rally included Angela Monti Fox of The Mother’s Project, Patti Wood of Grassroots Environmental Education and several Minisink residents who spoke about their personal experiences. 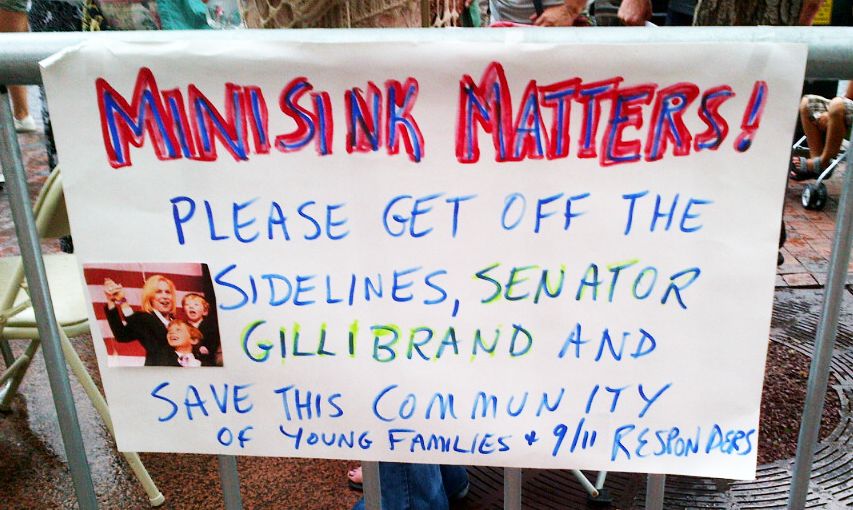 “Fracking is a children’s health issue,” said Wood, citing a study, Unconventional Natural Gas Development and Infant Health, by Elaine Hill at Cornell University. Her study showed that children born to mothers living near fracking operations had a 25 percent increase in low birth weight. Wood pointed out that, in contrast, smoking during pregnancy increases the risk of low birth weight by 0.18 percent.

During the rally, Mininisk residents submitted a letter to the Senator demanding that she take a stand to protect her constituents. They were shocked that no one from the Senator’s office would come down to receive the letter directly from them and instead had the letter delivered by a building security guard. “This is outrageous,” said Marge Schab, a supporter from New York City. “These families traveled a long distance with their young children and she couldn’t even send down an intern!”

The letter demanded that the Senator submit an amicus brief to the court in her capacity as member of the Senate Committee on Agriculture, describing the state-wide significance of the agricultural resources in Minisink that are endangered by this project. They are also asking for Congressional hearings into “regulatory failures” as documented by their case. “Senator, as a mother and 9/11 First Responder advocate, your contradictory silence on the crisis in Minisink is glaring and unacceptable,” states the letter. The group has posted a shorter version of the letter on their website so supporters can sign the letter and send it directly to Sen. Gillibrand.

“While many in New York are against the grave dangers that fracking poses, most are not aware of the infrastructure that supports it and delivers fracked gas to their kitchen stoves,” said Minisink resident Asha Canalos. “There is a vast infrastructure of pipelines, compressor stations, frack waste storage facilities, etc., growing at a phenomenal speed in our state; terrible harm is already occurring to people who live near this build-out. And the dangers are not just local—we are in the watershed and farmlands that provide for New York City—so this infrastructure presents incredible new risks for city-dwellers an hour away, as well.”

Pramilla Malick, mother of four, stated “There is particular concern for children, whose bodies are acutely affected by exposures to toxic chemicals, and for our 9/11 First Responders, who moved here for the cleaner air. On May 9, a blow-down event released unknown quantities of emissions and toxins causing residents, including children, to suffer nosebleeds, headaches and neurological symptoms. The families of Minisink are at risk and already suffering. We need help now.”

Minisink’s case challenges not only Millennium Pipeline—the company responsible for the highly controversial compressor station project—but also the final ruling of the Federal Energy Regulatory Commission (FERC), the government agency that approved the plan. Already, Minisink has broken several precedents: The creation of a far safer, community-backed alternate proposal, known as The Wagoner Alternative; overwhelming support of their alternate proposal by two of the FERC Commissioners, including Chairman Jon Wellinghoff; and a highly unusual stay of construction granted by the U.S. Court of Appeals last fall. Their attorney, Carolyn Elefant, believes the community has one of the strongest cases currently pending review on the federal level. If Minisink is successful, it will be the first community to have a compressor facility shut down and completely removed; this would be a historic legal precedent that would empower communities across the country. If Minisink loses this battle, it’s a sure victory for the industry in terms of expansion into residential and agricultural areas everywhere, nationally.

SHARE YOUR THOUGHTS BELOW: How far would you take the battle to protect your neighborhood from fracking infrastructure?