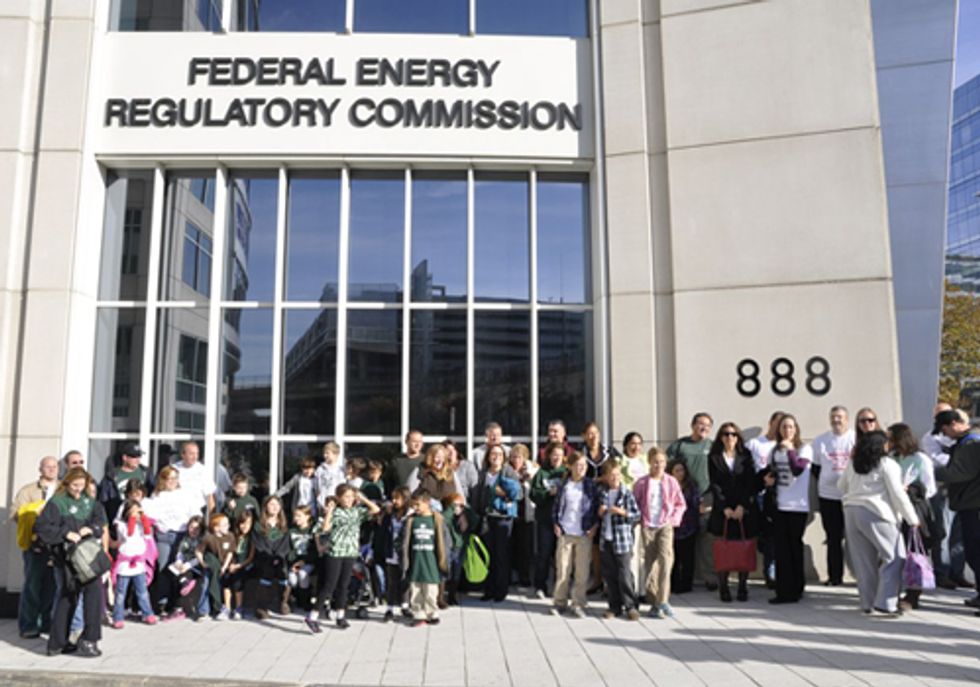 Yesterday, more than 80 residents from Minisink, New York, wearing white t-shirts with phrases including, "I live across the street from the compressor station," rallied outside of the Federal Energy Regulatory Commission (FERC) building in Washington, DC. The protest was followed by visits to New York Senators Kirsten Gillibrand and Charles Schumer’s offices. Minisink residents, including several 9/11 first responders, are demanding FERC expedite a response to their rehearing challenge. The final decision will set an important precedent not only for the state, but also for communities across the nation fighting industrial development.

Minisink residents intend to challenge their case in the U.S. Court of Appeals, but are prevented by recent tolling orders issued by FERC. The tolling order allows FERC as much time as they deem appropriate to respond to the rehearing requests; in some previous cases this period has lasted several years. Meanwhile, Millennium Pipeline has begun construction of the compressor station, working at an alarming speed, despite the undecided FERC ruling. The Minisink community feels this is a complete violation of their due process rights.

Residents have been fighting the construction of a 12,260 horsepower compressor station in a residential area of town since July 2011. Families are gravely worried about safety, health and economic impacts. The closest home to the proposed site is only 650 ft. away, and there are more than 200 other families within a half-mile of the site. Among them are several 9/11 first responders with documented lung damage who are extremely concerned about further health implications from toxic emissions.

On Oct. 6, nearly 200 residents of Minisink, NY marched for justice in efforts to halt construction activities of the proposed Minisink Compressor Station, in the hamlet of Westtown, NY.

Residents have been pushing for an alternative site located only 10 miles away. Known as the Wagoner Station, this is an 18.8 acre cleared site that is industrially zoned and already owned by the gas company. The Wagoner Station had a temporary compressor station operating on the property for three years. The closest residence to the alternative site is more than three-quarters of a mile away.

FERC Chairman Wellinghoff and Commissioner LaFleur voted against the Minisink Compressor proposal on July 17 and gave full explanations why they support the alternative location. Carolyn Elefant, the DC-based attorney who is representing Minisink, believes the community has an excellent case and a likelihood of having the decision overturned in court.

Watch this video for background information on the fight against the Minisink compressor station: