Millions to ‘March Against Monsanto' on May 24 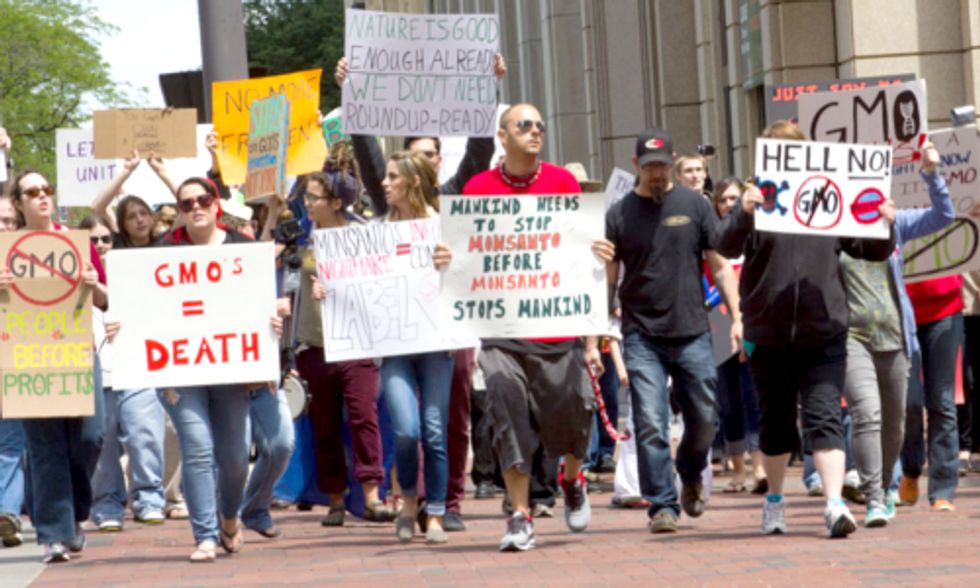 Regardless where you live, May 24 marks the annual opportunity to March Against Monsanto.

The event protesting the GMO (genetically modified organisms) giant will simultaneously take place in more than 400 cities in 52 countries that span six continents. That's up from 286 cities in 36 countries last year. Among the marches is one in St. Louis, MO, which is home to Monsanto's headquarters.

The March Against Monsanto will take place in about 150 more cities than last year. Photo credit: Becker1999/Flickr Creative Commons

"Historically, Monsanto has brought us DDT [(dichloro-diphenyl-trichloroethane], PCBs [polychlorinated biphenyl], Agent Orange and dioxin," reads a Facebook invitation to the St. Louis march. "Monsanto’s reckless use of chemicals calls into question their testing standards, lack of scientific rigor, disregard for the precautionary principle and disregard for human life and the ecosystem.

"Currently, we’re faced with Monsanto’s seed patenting and subsequent extortion in demanding pay for seeds from future crops, the proliferation of genetically modified foods (GMOs), use of dangerous pesticides, and their efforts to control the food supply. Monsanto leaves damaged farms, people, animals and entire ecosystems in their wake."

The event aims to highlight the various modes of distress Monsanto has created for people around the planet. For example, more than 250,000 impoverished farmers in India have committed suicide as a result of Monsanto's Bt cotton seeds not performing as anticipated. Sterility, infant mortality, birth defects and increased cancer risks are among the health risks associated with Monsanto chemicals and seeds.

"We will not allow this ‘Garden of Eden' to be compromised by the destructive practices of multinational corporations like Monsanto," Josh Castro, organizer for Quito, Ecuador’s march, said in a statement for the global march. "Biotechnology is not the solution to world hunger. Agroecology is. Monsanto's harmful practices are causing soil infertility, mono-cropping, loss of biodiversity, habitat destruction and contributing to beehive collapse. GMO crops cross pollenate with traditional crops, risking peasant farmers' livelihood."

Local March Against Monsanto events will take place in 47 of 50 states in the U.S.

"We must act now to stop GMOs and harmful pesticides.”