Millions of Dead Fish Washing Up on Vietnam's Shores 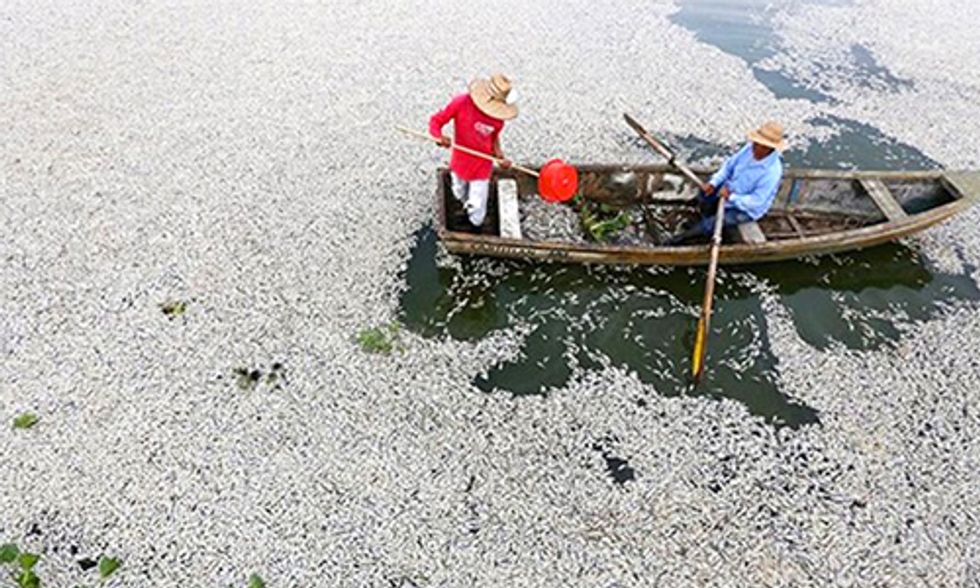 Vietnam has a fish problem and the government isn’t talking about it. Since April, millions of dead fish have been washing up on Vietnam’s shores.

Since April, millions of dead fish have been washing up on Vietnam’s shores. Photo credit: Jennifer Carole

The lifeless fish and clams—along with the odd whale—go on for miles. Researchers hired by Vietnam’s government have concluded that “toxic elements” are behind the “unprecedented” deaths, but that’s where the answers seem to stop, reports Scott Duke Harris for the Los Angeles Times.

While the government is reluctant to a point any fingers—there’s a $10-billion investment on the line—locals, particularly fishermen, blame the environmental catastrophe on Formosa, a steel plant from Taiwan that allegedly pumped untreated steel wastewater into the ecosystem. If that’s true, the environmental consequences could be devastating.

According to Satyendra Kumar Sarna, a metallurgist and veteran of the steel industry since 1965, of Ispat Guru, there are several possible environmental effects of untreated wastewater: toxicity, which affects marine life; reduced levels of dissolved oxygen, which also affects marine life and the temperature of the water; silting; and oil slicks.

Unsurprisingly, the folks at Formosa aren’t being transparent about the role they did or didn’t play in this fishy mess. On one hand, the corporation is screaming that there’s (conveniently) no proof that it’s to blame. On the other hand, in a really bad PR move, a PR rep “also suggested that Vietnam may have to accept environmental trade-offs for industrial growth—perhaps a choice between steel or fish,” reports the Los Angeles Times.

Feel free to join me in a facepalm right about now.

While it sounds horrible, Asia is preoccupied with progress at any price. As Care2′s Steve Williams recently reminded us there’s a “coal-fired standoff with Asia” at the moment, despite the recent Paris climate deal where, “Experts warn that the expansion of coal-fired plants in India, China, Indonesia and Vietnam cannot be allowed to move forward if we want any chance to achieve our pollution reduction goals.”

Even with so much at stake for our planet, Vietnam is adamant about significantly expanding its coal-fired plants. President of the World Bank Jim Yong Kim made this shocking statement to The Guardian about Vietnam’s plans: “If Vietnam goes forward with 40GW of coal, if the entire region implements the coal-based plans right now, I think we are finished. That would spell disaster for us and our planet.”

Fortunately, the people of Vietnam don’t agree with their government’s blatant disregard for the environment. In response to Formosa’s disconnected ultimatum between steel and fish, many locals choose fish, as the hashtag #ichoosefish illustrates. These locals understand: “No blue, no green.”

Many fish supporters took it a step further. This “unprecedented” fish die-off has sparked another unprecedented event in Vietnam: protests. While it may not seem revolutionary to us in the west, keep in mind that Vietnam is a communist state, so standing up to the government is a big no-no. But the price is just too high in this case. You can’t really eat steel now can you?

And this tweet illustrates how the government responds to protesters.