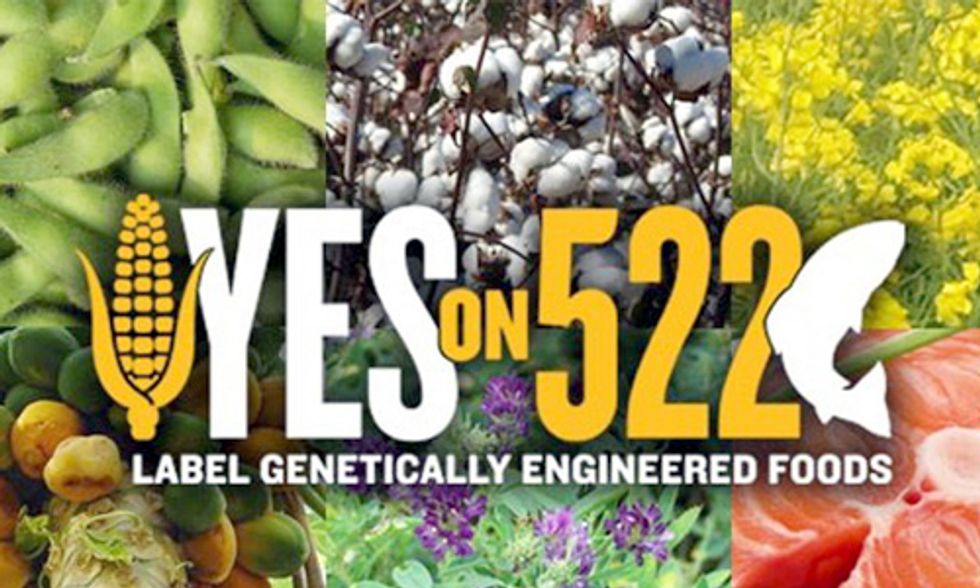 Twenty years after the controversial introduction of unlabeled and untested genetically engineered foods and crops, opposition to Genetically Modified Organisms (GMOs) and Monsanto has created one of the largest netroots-grassroots movements in the U.S.

There are arguably more important issues facing us today than the battle against Frankenfoods. The climate crisis and corporate control over the government and media come to mind. But the rapidly growing anti-GMO movement illustrates the powerful synergy that can develop from the combined use of social media, marketplace pressure and political action. Recent developments in this sector indicate that out-of-control corporations, media, politicians and the proverbial “one percent” can be outsmarted and outmaneuvered. And quite possibly defeated.

In the wake of high-stakes multi-million dollar GMO labeling ballot initiatives in California in 2012, and Washington State in 2013, an army of organic food and natural health activists have put Corporate America and the political elite on the defensive. We’ve demonstrated that aggressive populist issue-framing; unconventional “inside-outside” coalition-building; marketplace pressure; and online list-building, mobilization and fundraising—strategically channeled into local and state-based political action—can begin to even up the odds between David and Goliath.

Here are five strategic lessons from the ongoing battle against GMOs in the U.S, lessons that may be applicable to a broad range of political issues.

The desire to know what’s in our food, coupled with a growing concern for food safety and a distrust of large chemical companies, the mass media, Congress and federal regulatory agencies, is a hot-button issue that unites the majority of Americans—Democrats, Republicans, Greens, Libertarians and Independents alike.

Forty percent of consumers believe that unlabeled genetically engineered foods and crops are unsafe. Another 40 percent are unsure. These numbers terrify large supermarket chains, biotech companies and food corporations. So does the notion that states such as Washington, Connecticut, Maine and Vermont will soon require mandatory labeling of GMOs—which will likely drive these controversial foods and crops off the market, just as labeling laws have already done in Europe.

Anti-GMO campaigners have gained the support of millions of consumers and voters by framing food safety as a populist issue. And by relentlessly and aggressively challenging the opposition—big-name companies that include Monsanto, Coca-Cola, Pepsi, Nestlé, General Mills and others.

After 20 years of grassroots public education and advocacy, the organic and natural health movements, led by a hybrid coalition of non-profit public interest groups, such as the Organic Consumers Association and Food Democracy Now, and green businesses, including Mercola.com, Dr. Bronner’s and Nature’s Path, are approaching something like critical mass.

More than 100 million U.S. consumers are now regularly shopping for organic and natural foods, nutritional supplements and other products, giving rise to a rapidly growing $80 billion-a-year market for organic and natural products. One of the most important accomplishments of the right-to-know, anti-GMO movement has been to unite the advocacy and fundraising efforts of non-profit groups and health and green-minded for-profit businesses. After 20 years of often operating on shoestring budgets, activist groups (the “outsiders”) are now increasingly joining hands with a number of profitable organic/green/Fair Trade businesses (the “insiders”). This inside-outside strategy has managed to raise a not insignificant war chest of almost $20 million to support the state GMO labeling ballot initiatives in California and Washington in 2012 and 2013, while simultaneously pressuring major brands, such as Whole Foods Market, Trader Joe’s and Chipotle, to embrace GMO labeling.

At the same time activist groups with a more radical message (“outsiders”) are learning that you must, for maximum impact, work with more moderate groups (the “insiders”), and vice-versa. This ecumenical “inside-outside” strategy has allowed the more radical organic and natural health groups and scientists to highlight the alarming human health and environmental hazards of GMOs, and carry out boycotts, street demonstrations and direct action, while the less radical campaign groups and coalitions meanwhile appeal to a more moderate demographic with the mainstream message that consumers have the right to know what’s in their food.

Anti-GMO campaigners have now learned that marketplace pressure and political action go hand-in-hand. It’s not enough to just vote with your pocketbook for organic and non-GMO foods and products, to reward good companies and brands and punish the bad ones. We must get political, and vote for a healthy, climate-friendly food and farming system in the voting booth as well. If we want to drive GMO foods off the market, we must not only walk our talk in the marketplace and in our everyday lives, but also “get political” and mobilize our base to get involved in legislative battles and political campaigns.

One important consequence of marketplace pressure and boycotts is their potential to gradually divide our opponents. In the case of the anti-GMO movement, we’ve begun to drive a wedge between the biotech/industrial agriculture corporations, and their erstwhile allies, food manufacturers and supermarket chains. In the wake of the California GMO labeling ballot initiative (Proposition 37), the Organic Consumers Association and our allies launched a nationwide boycott of traitor brands, the organic and natural brands whose parent corporations spent $20 million, along with the biotech industry’s $30 million, to defeat Prop 37. We sabotaged several dozen corporate Facebook pages, tarnishing brand names such as Kashi, Cascadian Farm, Honest Tea, Naked Juice, Silk, Horizon and Ben and Jerry’s, to depress sales. This caused several large multinationals, including Unilever, parent company of Ben and Jerry’s, and Mars, parent company of Seeds of Change, to back off from anti-labeling activities. Other retail and food giants, including Wal-Mart, fearing an escalation in consumer activism, have begun lobbying the FDA to implement federal GMO food labels.

In the recent GMO ballot initiative campaigns in California and Washington, as well as state legislative campaigns for labeling in several dozen other states, right-to-know supporters have been able to send coordinated or complementary email messages to more than 10 million people at once. Over the past 12 months groups like the Organic Consumers Association, Mercola.com, Food Democracy Now, Natural News, Alliance for Natural Health, Center for Food Safety, Just Label It, Environmental Working Group, Cornucopia, Friends of the Earth, CREDO and MoveOn have been able to send out anti-GMO or pro-labeling messages to literally millions of consumers and voters on a regular basis, generating thousands of grassroots volunteers, organizing thousands of local events and protests, and raising more than $20 million, mainly in small donations. The anti-GMO movement may not have the deep pockets or the advertising and PR clout of the biotech and Big Food lobby when it comes to the corporate media, but we are rapidly developing our own mass media on the Internet and Facebook.

5. Local and state political action is more effective than campaigns that target federal laws and lawmakers.

The anti-GMO movement, like other social change movements, has learned the hard way that corporations and the wealthy elite control not only the mass media, but the federal government, Supreme Court and regulatory agencies such as the U.S. Food and Drug Administration (FDA), U.S. Department of Agriculture and U.S. Environmental Protection Agency. After decades of sending petitions and lobbying the White House, Congress and the FDA, to no avail, it has become clear that the political elite, including President Obama, care more about their wealthy campaign contributors than they do about their constituents, including the 93 percent who, according to a recent New York Times poll, support mandatory labeling of genetically engineered foods.

As a consequence the anti-GMO movement has moved its focus away from the unfavorable terrain of Washington D.C., and instead turned its attention to marketplace pressure, and state, county and local political campaigns, especially ballot initiatives. Citizen ballot initiatives are legal in 24 states and approximately 1,000 counties and municipalities. This form of direct democracy gives voters the power to enact labeling laws, bans or regulatory and zoning restrictions on biotech corporations and Big Ag, bypassing indentured politicians and federal bureaucrats. A number of California and Washington State counties over the last decade have moved beyond just labeling to outright bans on GMO crops, thanks to citizen-driven local political action. In 2014, four Oregon counties will have ballot initiatives calling for bans on GMO crops.

Win or lose in Washington State on Nov. 5, the anti-GMO Movement has evolved into a savvy army of grassroots activists who are committed to the ongoing battle to reclaim our food and farming systems, part of a larger battle to transform the entire political and economic system.