Milan Plans to Limit Cars After Coronavirus Restrictions Are Lifted 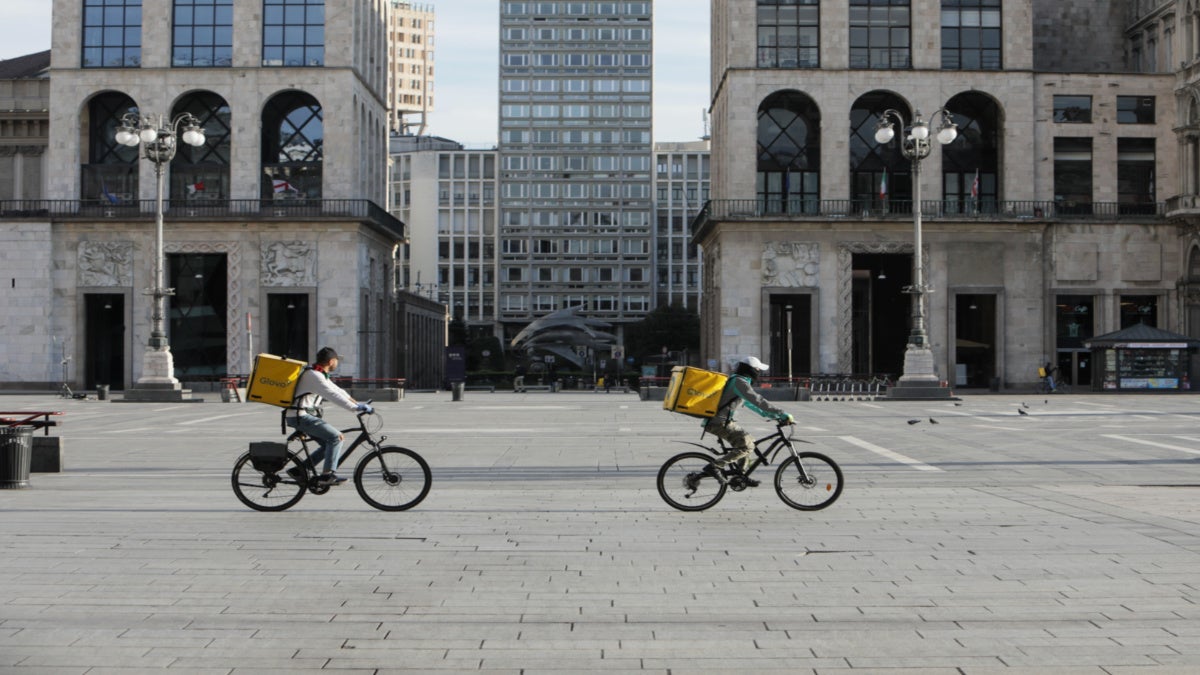 General view of Milan during the lockdown due to Coronavirus emergency on April 12 ,2020. Mairo Cinquetti / NurPhoto / Getty Images

Climate activists from across the globe on Tuesday welcomed an ambitious new plan for Milan that will, according to the Guardian, transform 22 miles of street space currently reserved for cars “with a rapid, experimental citywide expansion of cycling and walking space to protect residents as COVID-19 restrictions are lifted.”

Greece-based author Julian Hoffman declared, “Turning 35km of Milan’s streets over to cyclists and pedestrians shows how there are openings amidst the crisis to boldly and beneficially reimagine our lives, landscapes, and future on the other side.”

The coronavirus pandemic has sparked calls for a global Green New Deal and just recovery that incorporates climate action—particularly a swift transition to 100% renewable energy and other initiatives to cut planet-heating emissions—into rebuilding the world’s economy. The crisis has also elevated concerns about air quality, as studies have shown that high levels of pollution may be “one of the most important contributors” to deaths from COVID-19.

As the Guardian reported:

The northern Italian city and surrounding Lombardy region are among Europe’s most polluted, and have also been especially hard hit by the COVID-19 outbreak.

Under the nationwide lockdown, motor traffic congestion has dropped by 30-75%, and air pollution with it. City officials hope to fend off a resurgence in car use as residents return to work looking to avoid busy public transport.

“Of course, we want to reopen the economy, but we think we should do it on a different basis from before,” he said. “We think we have to reimagine Milan in the new situation. We have to get ready; that’s why it’s so important to defend even a part of the economy, to support bars, artisans, and restaurants. When it is over, the cities that still have this kind of economy will have an advantage, and Milan wants to be in that category.”

Granelli’s comments were applauded by Greenpeace U.K., which tweeted that he was “hitting the nail squarely on the head.”

“Of course, we want to reopen the economy, but we think we should do it on a different basis from before."

The Deputy Mayor of Milan hitting the nail squarely on the head. 👏👏👏#Cycling #Covid19https://t.co/o4A2fnwih2

News of the plan was also welcomed on Twitter Tuesday by C40 Cities, Extinction Rebellion Camden, and Swedish teen climate leader Greta Thunberg, who founded the global Fridays for Future movement. Others celebrated the plan as an “excellent example of #BuildBackBetter” and called for crafting similar schemes for other major cities like New York, London, and beyond:

“It’s a once-in-a-lifetime opportunity to take a fresh look at streets & make sure that they are set to achieve what we want to achieve: not just moving cars, but making it possible for everyone to get around safely.” Wouldn’t this be lovely to replicate https://t.co/p49G60WHju

#Milan launches Strade Aperte to "reopen the economy, but on a different basis".
– 35km of streets to become #bike lanes
– Wider pavements
– 30kmh speed limits
– Priority to active modes@JSadikKhan: New York will be looking at Milan for guidancehttps://t.co/kdJLVNwTHZ pic.twitter.com/npqiATBpXu

Be great if we could emulate this in Brighton. And London. And everywhere else…

“As cities across Europe move out of lockdown, it’s a superb opportunity to say goodbye to traffic-clogged streets,” wrote Sylvia Thompson, a contributor to The Irish Times who covers health, nature, science, and environmental issues.

Janette Sadik-Khan—a former transportation commissioner for New York City who is working with cities including Milan and Bogota on their transport recovery programs—told the Guardian that Milan’s scheme could serve as a model for the rest of the world.

“A lot of cities and even countries have been defined by how they’ve responded to historical forces, whether it’s political, social, or physical reconstruction,” said Sadik-Khan. “The Milan plan is so important is because it lays out a good playbook for how you can reset your cities now.”

“It’s a once-in-a-lifetime opportunity to take a fresh look at your streets and make sure that they are set to achieve the outcomes that we want to achieve: not just moving cars as fast as possible from point A to point B, but making it possible for everyone to get around safely,” she added. “I know we’ll be looking to Milan for guidance from New York City.”