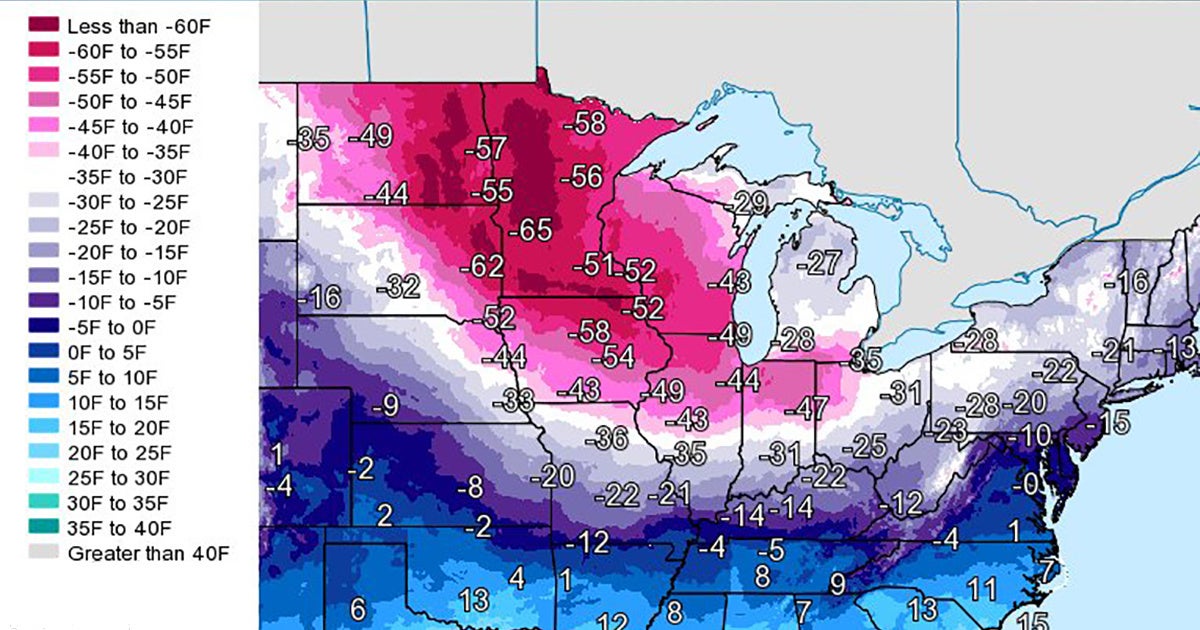 The upper midwest is bracing for some dangerously cold weather this week. Wind chills are expected to reach levels not seen since the 1990s in parts of Illinois, Minnesota, Iowa, Wisconsin and the Dakotas, the National Weather Service predicted.

Wind chills will fall to dangerous levels in the Upper Midwest this week, and should be the coldest since the mid-1990s in parts of the eastern Dakotas, Minnesota, Iowa, Wisconsin and northern Illinois. Wind chills falling below -40 can cause frostbite on exposed skin in minutes. pic.twitter.com/FFVZe1xGhD

The Chicago NWS said the forecast was for “life-threatening extreme cold,” The Washington Post’s Capital Weather Gang reported. The dangerous cold snap could potentially break records, with forecasts for Chicago, Des Moines, Cleveland, Detroit and Minneapolis putting temperatures within one degree of the coldest ever recorded. In Chicago, some forecasts on Monday put temperatures at -29 degrees, two degrees below the lowest on the books.

Minneapolis Public Schools are closing through Wednesday to protect students, as are some schools in eastern Iowa, and the Chicago Public School system is keeping an eye on the thermometer, The Associated Press reported. Homeless shelters are also gearing up for the onslaught. Organizations in Minneapolis are working to increase hours and beds.

The Washington Post’s Capital Weather Gang explained why cold weather is so dangerous:

“A recent report from the Centers for Disease Control and Prevention found that cold weather is responsible for the majority of weather-related fatalities. The wind chill temperature is more than a catchy forecast term. The wind blows away the insulating layer of warm air around us generated naturally by our bodies. Wind chill attempts to quantify the effect in terms of how it feels on our skin, which is why you’ll sometimes hear it called the “feels like” temperature. A wind chill of minus-20 degrees can cause frostbite in as little as 30 minutes.”

The freezing temperatures are caused by something called a polar vortex, an area of low pressure and cold air that circulates around the poles. As warm air from Morocco entered the Arctic last month and caused it to warm about 125 degrees, this influx of warm air divided the polar vortex, sending one of its pieces down to freeze the Midwest, atmospheric environmental research expert Judah Cohen told The Associated Press.

Here it comes! Thanks to 🛰 #GOESEast and #GOES17, we can visually see the #polar air set to bring potentially historic and dangerous cold air over the Upper Midwest this week. The numbers in the loop? Those are wind chills. Why yes, they are low. As low as -81F in fact. 🥶 pic.twitter.com/5U5F6wQTgm

Earth is anomalously warm today, but North America is cold. A huge blob of icy Arctic air, usually corralled up north by the polar vortex, has escaped and moved south. You can check the data here: https://t.co/m9Sv7Ot97h … Is this becoming more common, and why? /1 pic.twitter.com/DorTolZATK

Despite this, President Donald Trump once again used the predicted cold snap as an excuse to deny climate science.

“In the beautiful Midwest, windchill temperatures are reaching minus 60 degrees, the coldest ever recorded. In coming days, expected to get even colder. People can’t last outside even for minutes. What the hell is going on with Global Waming? Please come back fast, we need you!” he tweeted.

This prompted journalists to repeat the truth that climate and weather are not the same thing.

“The globe as a whole is still much warmer than normal, and scientists say the cold snap in parts of the U.S. in no way invalidates the overwhelming scientific evidence showing global average temperatures are increasing due to the burning of fossil fuels for energy,” Axios’ Andrew Freedman wrote.

Remember, if you're cold, they're cold. Some furry friends of the NWS are here to remind you that unless your pets are tauntons, bring them indoors and keep them warm during this dangerous arctic outbreak.https://t.co/Bsd01VTJMo pic.twitter.com/NwHWZHJ8Gx

Correction: An earlier version of this story said that temperatures could hit -60 degrees in the upper Midwest and -55 in the upper Mississippi Valley. The story has been updated to specify that those are wind chill temperatures.