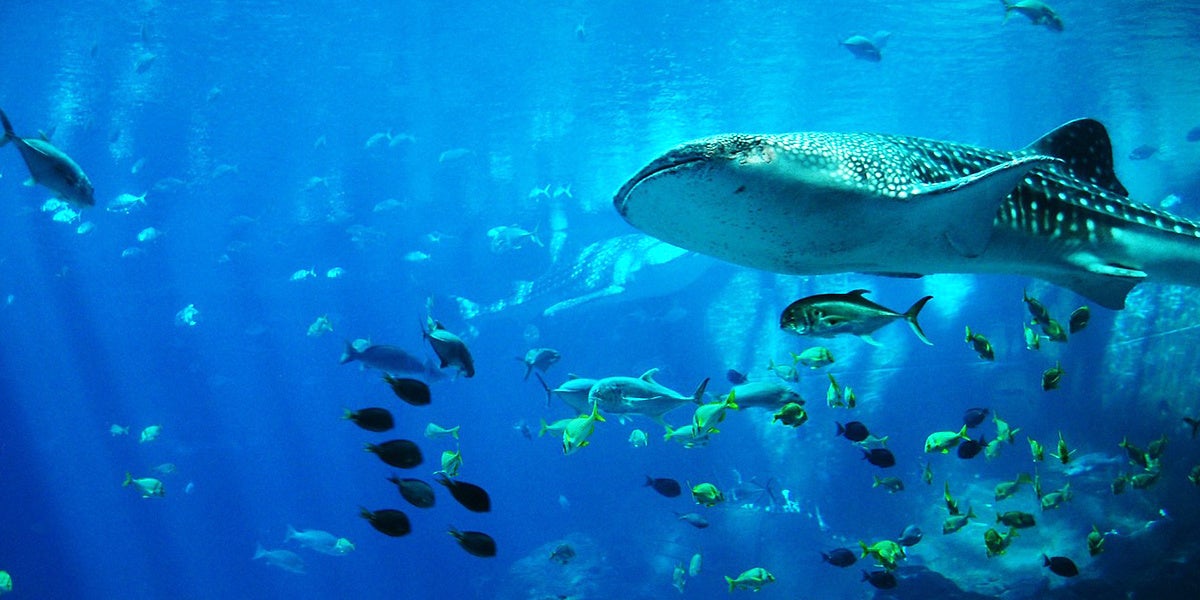 Whale sharks can ingest 200 pieces of plastic per day.

Some of our
oceans‘ largest creatures are being threatened by the tiniest bits of plastic that litter our seas, a new analysis published in the journal Trends in Ecology & Evolution found.

Filter-feeding marine animals such as manta rays and whale sharks swallow hundreds to thousands of cubic meters of water a day to capture plankton to eat. But at the same time, these gentle giants are swallowing up
microplastics from plastic-filled waters or through contaminated prey.

Ingesting these bits could be hazardous to filter feeders because of the toxic chemicals the particles contain. According to a review of the study, “plastic-associated chemicals and pollutants can accumulate over decades and alter biological processes in the animals, leading to altered growth, development and reproduction, including reduced fertility.”

The research was led by Elitza Germanov, a researcher at the Marine Megafauna Foundation and Ph.D. student at Murdoch University.

The creatures happen to feed in
microplastic pollution hotspots—including the Gulf of Mexico, the Mediterranean Sea, the Bay of Bengal and the Coral Triangle in South East Asian waters—and can swallow up a staggering amount of plastic.

Per the BBC, whale sharks in the Sea of Cortez off Mexico’s Baja Peninsula ingest about 200 pieces of plastic per day, while fin whales in the Mediterranean Sea swallow about 2,000 microplastic particles per day.

“As these areas are hotspots for microplastics, our results could indicate that filter feeders are taking up microplastics in their feeding grounds,” said study co-author Maria Cristina Fossi, a professor of ecology and ecotoxicology from the University of Siena in Italy.

Several species of filter feeders are already listed by the International Union for Conservation of Nature as globally threatened species. Germanov pointed out that microplastic contamination could further reduce their population numbers, as these animals live for many years and have few offspring.

While a definitive link between microplastic ingestion and toxin exposure for filter feeders is yet to be confirmed, Germanov noted that other studies of sea birds and small fish have found a link.

“Despite the growing research on microplastics in the marine environment, there are only a few studies that examine the effects on large filter feeders,” she said.

“This is because it is difficult to assess plastic concentrations via conventional methods such as stomach analysis, because these are unsuitable for threatened species like whale sharks and manta rays.”

Germanov said long-term studies will help shed light on the effects of microplastic contamination on the health of filter feeders.

“As plastic production is
projected to increase globally, the establishment of long-term monitoring programs is needed in the feeding grounds of these ocean giants, so we can check on toxicity levels in these creatures over a period of time,” she said.

Germanov added, “Raising awareness of this issue in communities, among governing bodies and industries could help to change behaviors around the production, management and use of plastics.”