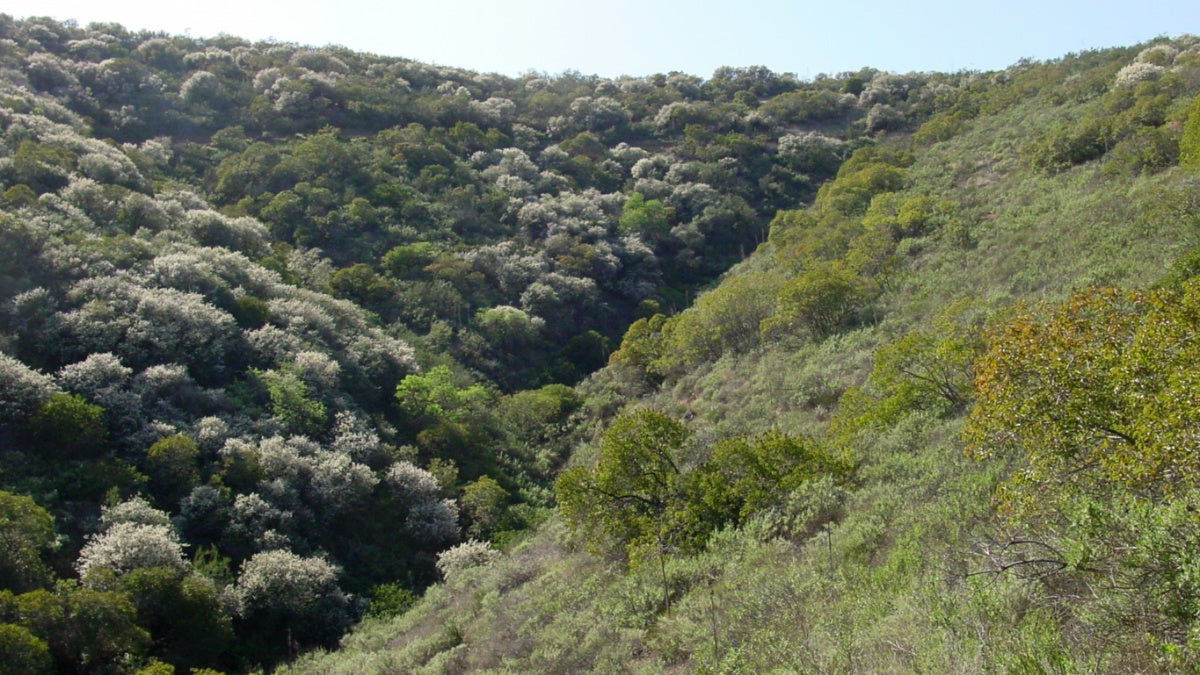 This image of the Santa Monica Mountains in California shows how a north-facing slope (left) can be covered in white-blooming hoaryleaf ceanothus (Ceanothus crassifolius), while the south-facing slope (right) is much less sparsely covered in a completely different plant. Noah Elhardt / Wikimedia Commons / CC by 2.5

If weather is your mood, climate is your personality. That’s an analogy some scientists use to help explain the difference between two words people often get mixed up.

In other words, weather exists in the short term. It’s the state of the atmosphere in a specific area during a limited period (think minutes, hours, days or weeks). Climate, meanwhile, describes long-term average weather trends.

And if you’re interested in the latter, you’d better know geography: Our global climate is made up of smaller regional climates. Break those down and you’ll find local variations at just about every conceivable scale.

That brings us to microclimates, an amazing subject with broad applications for farming, conservation, wildlife management and city planning.

Climates are a bit like woven tapestries. The big picture is important, no question. But so are all the seemingly minor details found inside the larger whole.

Tommaso Jucker is an environmental scientist at the University of Bristol. In an email, Jucker says he’d define the term microclimate as “the suite of climatic conditions (temperature, rainfall, humidity, solar radiation) measured in localized areas, typically near the ground and at spatial scales that are directly relevant to ecological processes.”

We’ll talk about that last bit in a minute. But first, there’s another criteria to discuss. According to some researchers, a microclimate — by definition — must differ from the larger area that surrounds it.

Forests provide us with some great examples. “The climate near the ground in a tropical rainforest is dramatically different from the climate in the canopy 50 meters [164 feet] above,” says University of Montana ecologist Solomon Dobrowski in an email. “This vertical gradient among other factors allows for the staggering biodiversity we see in the tropics.”

Likewise, scientists observed that a 2015 partial solar eclipse caused the air temperature of an Eastern European meadow to change more dramatically than it did in a nearby forest. That’s because trees provide not only shade, but their leaves also reflect solar radiation. At the same time, forests tend to reduce wind speeds.

All those factors add up. A 2019 review of 98 wooded places — spread out across five continents — found that forests are 7.2 degrees Fahrenheit (4 degrees Celsius) cooler on average than the areas outside them.

Now if you hate the cold, don’t worry; there’s a cozy exception to the rule. According to that same study, forests are usually 1.8 degrees Fahrenheit (1 degree Celsius) warmer than the external environment during the wintertime. Pretty cool.

When does a microclimate stop being, well, micro? In other words, is there a maximum size we should be aware of when discussing them?

Depends on who you ask. “In terms of horizontal scale, some have defined ‘microclimate’ as anything that is less than 100 meters [328 feet] in range,” Jucker says. “I’m personally less prescriptive about this.”

Instead, he says the “scale at which we want to measure [a particular] microclimate” ought to be “dictated” by the questions we’re trying to answer.

For instance, solitary plants have the power to generate itty-bitty microclimates. Just ask Peter Blanken, a geography professor at the University of Colorado, Boulder and the co-author of the 2016 book, “Microclimate and Local Climate.”

Many organisms eke out a living in some of the dinkiest microclimates you can imagine.

Take aphids, spider mites and leaf miner insects. All those critters are dwarfed by the plant leaves they feed on. And every leaf comes with its own microclimate. Observations show that aphids seek out cooler leaves while those other invertebrates prefer warmed ones.

Because none of these animals can generate their own body heat, leaf microclimates have a critical effect on their well-being. 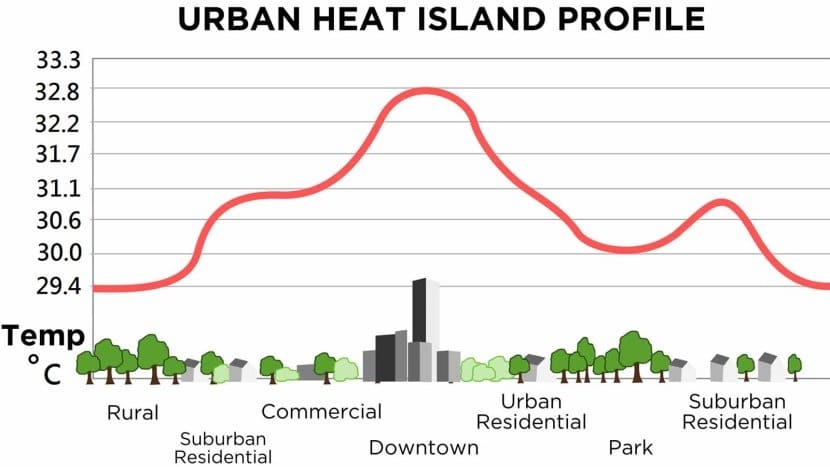 The urban heat island effect is a good example of how microclimates work. NOAA

Microclimates on a Grand Scale

It’s no secret that our planet is going through some rough times at the macro level. The global temperature is climbing; nine out of the 10 hottest years on record have occurred since 2005. And by one recent estimate, roughly 1 million species around the world are facing extinction due to human activities.

“One of the big questions that ecologists and environmental scientists are trying to answer right now is how will individual species and whole ecosystems respond to rapid climate change and habitat loss,” says Jucker. “…To me, [microclimates are] a key component of this research — if we don’t measure and understand climate at the appropriate scale, then predicting how things will change in the future becomes a lot harder.”

Developers have long understood the impact small-scale climates have on our daily lives. Urban heat islands are cities that have higher temperatures than neighboring rural areas.

Plants release vapors that can moderate local climates. But in cities, natural greenery is often scarce. To make matters worse, plenty of our roads and buildings have a bad habit of absorbing or re-emitting heat from the sun. Vehicle emissions don’t exactly help the situation.

Still, it’s not like Boston or Beijing are thermal monoliths. Sometimes, the documented temperatures within a single city vary by 15 to 20 degrees Fahrenheit (8.3 to 11.1 degrees Celsius).

This story originally appeared in HowStuffWorks and is republished here as part of Covering Climate Now, a global journalism collaboration strengthening coverage of the climate story.