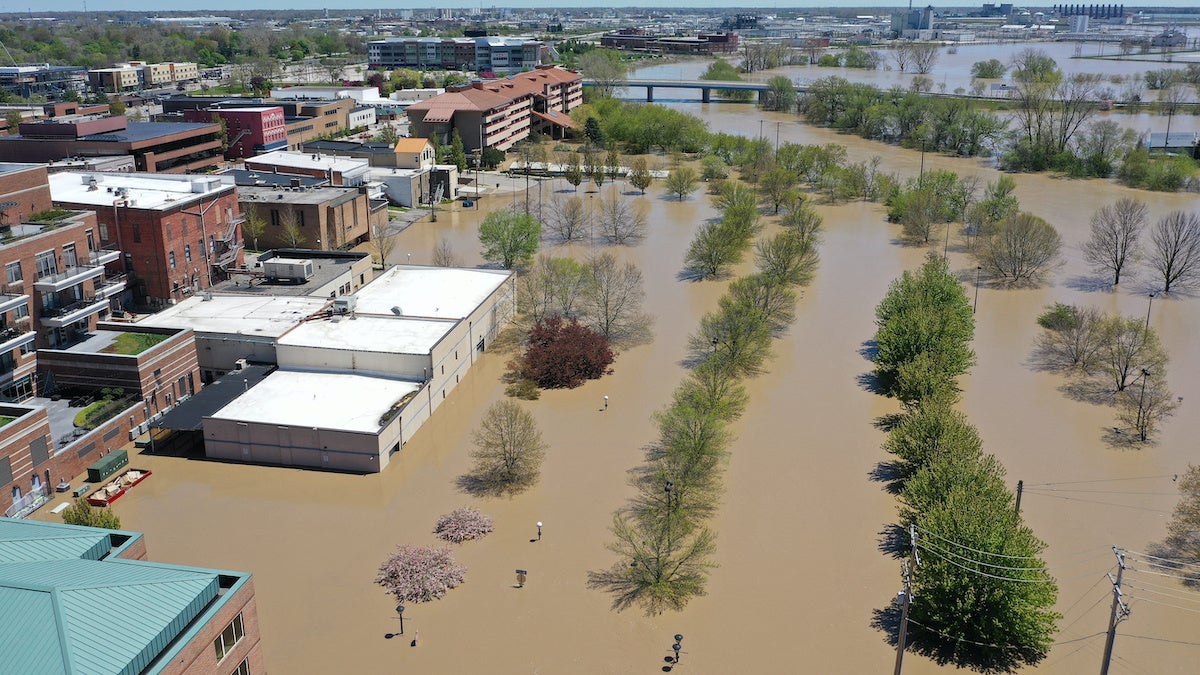 Floodwaters flowing from the Tittabawassee River into the lower part of downtown Midland on May 20, 2020 in Midland, Michigan. Thousands of residents have been ordered to evacuate after two dams in Sanford and Edenville collapsed. Gregory Shamus / Getty Images

Around 10,000 people were forced to evacuate their homes in central Michigan after heavy rain prompted what the National Weather Service called “catastrophic failures” at two dams.

The Edenville and Sanford dams collapsed Tuesday night, threatening to drench the town of Midland, Michigan under nine feet of water, Reuters reported. The flooding comes as Michigan suffers one of the nation’s worst coronavirus outbreaks, The New York Times pointed out. It currently has 53,009 confirmed cases, according to Johns Hopkins University data as of Thursday morning, the seventh highest total in the U.S.

“It’s hard to believe that we’re in the middle of a 100-year crisis, a global pandemic, and we’re also dealing with a flooding event that looks to be the worst in 500 years,” Michigan Governor Gretchen Whitmer said, as The New York Times reported.

.@GovWhitmer declared a state of emergency for @midlandcountymi after the Edenville & Sanford Dams breached. “If you have not evacuated the area, do so now and get somewhere safe,” said Gov. Whitmer. “This is unlike anything we’ve seen in Midland County." https://t.co/hMmN5QBdlQ https://t.co/oC3YzKv8Ls

Much of the town of Midland, Michigan, which has a population of 42,000, was inundated with record flooding Wednesday, Weather Underground reported. The Tittabawassee River gauge at Midland measured a water level about one foot above the previous record of 33.89 feet as of 2 p.m. local time. The river was expected to crest in the afternoon and evening, the National Weather Service said.

Extremely dangerous flooding continues across Midland County along the Tittabawassee River! Anyone near the river should seek higher ground immediately, avoid driving into flood waters, and continue to heed evacuation orders given by local authorities. #miwx pic.twitter.com/iZSImV1K7S

No deaths or injuries have been reported, according to The New York Times, but the event puts further pressure on residents and businesses already reeling from the impact of the coronavirus.

“It’s disastrous,” evacuee Sue Baranski from neighboring Sanford told The New York Times. “Between the devastation from the flooding and the virus and the small-business owners trying to make their way through that, it’s just too much.”

The flooding is the result of two environmental crises and may be the author of a third.

First, there’s the climate crisis. Warming temperatures are expected to increase precipitation in northern midlatitudes and lead to more intense periods of rainfall in many places, including the U.S., as Weather Underground pointed out. In Michigan, this process is already underway. 2019 was its wettest year on record, and Midland is 1.35 feet of rainfall away from its wettest May on record. Its rainfall total for Monday and Tuesday was its third highest on record.

Then there’s the state of one of the dams that failed. Federal regulators had warned for more than 20 years that the spillways at the Edenville Dam were not up to handling a major flood, CNN reported. However, they waited more than 13 years to crack down on the private company that operated the dam when it failed to comply, finally revoking its license in 2018. Oversight of the dam also passed from the federal government to the state of Michigan that year. Whitmer has promised an investigation of dam operator Boyce Hydro.

“This incredible damage requires that we hold people responsible,” Whitmer said, as HuffPost reported. “This was a known problem for a while and that’s why it’s important that we do our due diligence and take action.”

The flood also has the potential to cause lasting environmental damage as Dow Chemical confirmed Wednesday that flood waters were “commingling with on-site containment ponds,” NPR reported. The flood also reached a Superfund site caused by a Dow release of dioxins, according to CNN.

Midland, Michigan is home to Dow Chemical, one of the world's largest chemical companies.

Dow's facilities appear to be at the heart of the floodwaters – this has the potential to be a major environmental disaster. https://t.co/4oXW74OQAm