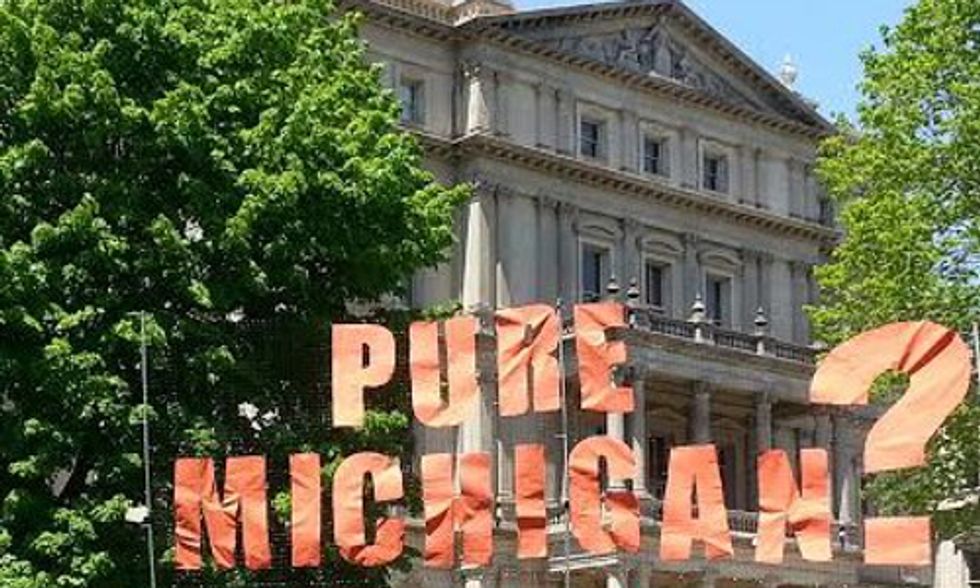 On Monday, May 19, participants in the Backbone Campaign’s first Midwest action camp spread out a river of tie-dyed blue sheets stained with sticky black fingers of oil on the capitol lawn. They donned masks depicting Enbridge executives and state representatives who have invited all sorts of unconventional oil and gas development into the state, as others led a “Pet Coke” mascot around on a leash and singers sang a song they called “Restore Pure Michigan,” replacing lyrics to the tune of Lorde’s “Royals” with a more pertinent chorus: “No more dirty oil!”

The lawn action and the flash mob in the Lansing capitol rotunda demonstrated what the Backbone Campaign has come to be known for: artful activism. The goal, as Backbone’s executive director Bill Moyer explained, was to expose the absurdity of the Michigan legislature welcoming all manner of unconventional fossil fuel extraction methods while the state’s tourism office carries out its “Pure Michigan” campaign. The juxtaposition of bold sunsets and pristine beaches with sand mines in the dunes, frack wells in the state forests, petroleum (pet) coke piles in Detroit, and the 2010 Kalamazoo River tar sands oil spill that still hasn’t been cleaned up, presented a smorgasbord of absurdity that was originally tossed about camp as “Pure Michigan my ass!”

The week long action camp brought 75 participants to the grounds of Circle Pines Center, a 75-year-old cooperative based on peace, environmental education and social justice that is surrounded by state land where mineral rights, ironically, were auctioned off for oil and gas development in 2012 by the state’s Department of Natural Resources.

A late-week workshop on jail support seemed to embody what an early workshop on nonviolent direct action stated up front: the D in Direct represents actions taken “when other avenues have been exhausted.” The presence of two of the jail support panelists, Lisa Leggio and Jessica Clark, both MI CATS members, affirmed another point from the early nonviolent direct action workshop: “the action isn’t over until all of your members are free.”

Both recently served jail time related to separate actions. Leggio was part of the “MI CATS 3” lockdown at an Enbridge pipeline construction site. Clark participated in a tree sit that also disrupted the expansion of the infamous 6B—the Enbridge pipeline that ruptured and spilled 1.2 million gallons of tar sands oil into the Kalamazoo River in 2010.

As discussions throughout the week revealed, Enbridge’s clean-up of the spill is still not complete. “It never will be,” said Kurt Gleichman. Kurt and Chloe Gleichman, father and daughter members of MI CATS, pointed out that Enbridge is just beginning another dredging operation. But signs along the river, while notifying swimmers of the presence of tar (soap will remove the sticky grit from hair, though it may take days), also claim that the water is safe to swim in. Beyond the permanent damage done to the ecosystem, people in river communities are worried about the toxicity of oil dispersants used in the clean-up process.

Leggio and Clark talked about the importance of the letters they received while in jail, and the attention all those letters garnered from other inmates. Vicci Hamlin, a grandmother and another one of the MI CATS 3 talked about the relationships she formed with other female inmates, most of them much younger. They looked forward to her daily sharing of her letters, drawing on the strong sense of community.

At the same time, participants shared their concern regarding an increase in felony charges and the use of “R and O” (resisting and obstructing) in response to nonviolent acts of disobedience. As one participant said, “We need to talk about this more, we need everyone who participates to understand that risk. Otherwise, if we present all the heroics, we’re no different than the Marine Corps.”

The day leading up to the action looked like the end-phase of any production. After immersing themselves in climbing, in image theatre, in discussions about the expansion of the tar sands pipelines through the state and under the straits of Mackinac, about the push for liquid natural gas export plants and the fast tracking of oil to rails, Circle Pines Center became a flurry of creative activity: people constructing props, writing song lyrics, rehearsing rotating theatrical scenes, putting it all together with the spectacle of masks and a “Pet Coke” gargoyle.

The music highlighted the relative absurdity of the state’s “Pure Michigan” campaign, while Rep. Aric Nesbitt (R-MI), chair of the Michigan House Energy & Technology Committee, sponsored House Bill 5205, an amendment to the Clean, Renewable and Efficient Energy Act, which appears to redefine “advanced cleaner energy systems” involved in the production of electricity as “any system using advanced thermal technology.” Such edits in the original language led protestors to believe that the petroleum (pet) coke piles they successfully “moved out” of Detroit might be back—maybe even deemed eligible for renewable energy credits, subsidies paid for by Michigan taxpayers.

And so they sang:

But all the people want:

Justice, no tricks, money out of politics,

It’s not fair, we ain’t caught up in your dark affair.

Calling attention to the ultimate dishonesty of any part of the fossil fuel extraction and refinement process being redefined as renewable—all under the state’s imagery of purity—the last line of the Localize This! song called out: